Mass Surveillance for Counter Terrorism: Are our Private Lives Compromised? 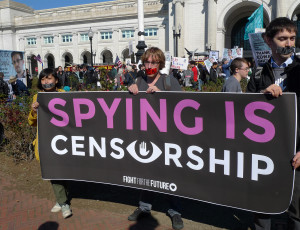 The aftermath of the shocking Charlie Hebdo shooting had evoked fear in governments. David Cameron, the prime minister of the United Kingdom, responded with an urgent proposal to increase cyber surveillance as a counter terrorism strategy, even to the extent of banning encryption. However, private matters, interpersonal communications and office work have all moved forward to the virtual world. Hence, it is not unreasonable for the governments around the world to target communication tools to secure national safety. Personal data retention from chat history, call records and other invasive policies are justified as helping the government identify and flag potential terrorists and acts of terrorism. Our private lives are compromised as Orwellian tactics become mainstreamed by Islamophobia and extreme militarized responses to terrorism.

National services and defense often kept their policies confidential to prevent potential nation-wide threats.As a result, the lack of transparency creates a fundamental distrust between the public and the national security as to how the surveillance system actually functions. While the technology-savvy populations understand how the National Security Agency collects our data by wire tapping, searching key terms, and deciphering encryptions, most are unaware to the extent of how benign information is utilized. There is no solid criteria in identifying potential risk factors. You are always monitored, reminiscent of the police state of 1984, but instead of Big Brother, it is the NSA. As Suzanne Nossel, the Executive Director of PEN American Centre, has said, “Fear of government surveillance is prompting many writers living in democratic countries to engage in the kind of self-censorship associated with police states”. Even the most innocent tweet or text could be used against you. The secrecy of how digital bulk surveillance is conducted maximize people’s cynicism, which is not helped by the American government’s history of breaking citizen trust.

Though only a minuscule fragment of the population would have legitimate terrorist activity to be garnered by these surveillance tactics, there is still possible consequences for the rest. Exploitation, either political or personal can occur from the mass information gathered in intelligence operations that can fuel agendas. No longer is a physical warrant needed to search a physical house or person; rather, in the digital world, cyber warfare has no rules about protection from the government. With the Patriot Act post-9/11, agents no longer need to be authorized by superior entities to intercept your personal information. In 2013, news journals reported cases of misconduct and abuse of power by National Security Agency (NSA) employees. One even spied on nine women without detection from superiors for years. It is uncomfortable to acknowledge occasions that the spying devices were used exploited for personal use – even if NSA officials identified them as isolated cases. Not only does the misconduct spying completely ignore its original direction, it also reveals the vulnerability of our privacy that can be access without proper reason that associated with tackling terrorism. If regulation is not even established appropriately at the personal micro-level among the national security agents, how can the digital intelligence be monitored at a macro-level involving the government and their potential abuse of power? Are we just relying on the handful of courageous whistleblowers like Edward Snowden and William Binney?

Furthermore, counter terrorism surveillance diverges people by ethnicity and interferes strongly with the private lives of specific targeted subgroups. Undeniably, terrorisms are often associated with certain ethnicity, if not speculated association with religious or ideological driven organization such as Al-Qaeda. As a result, some ethnical subgroups have a greater tendency to be subjected to racist profiling from the security system. The algorithms of digital surveillance may be more sensitive to interpersonal contacts and communication content of targeted population such as Arabic and Muslims. According to a document leaked by Snowden, there are five eminent Muslim Americans being flagged for having the terroristic intent. All of them have a reputable job and statuses and the only common feature they share is their Muslim heritage. There is an Islamophobic bias that furthers racism in the country at the expense of many, after the actions of a few. Muslim-Americans have become reluctant to be visible about their beliefs and customs — not only because of the NSA, but the ingrained Islamophobia in the general public. Censorship is an additional side effect of fear of the Big Brother-like government, as people self-censor to keep from being flagged and blacklisted as a result of algorithmic and term-based surveillance software. “Radical” ideology becomes synonymous with anyone disagreeing or challenging the current power or methodology of the government.

While the laws that have created this system were passed in the interest of public safety, in protection from risks of terrorism, the post-9/11 world had led to military and cyber exploitations of power that have killed many in wars and drone attacks, as well as ruining lives due to racial and radical profiling. It is vital to consider how much of our private spheres should the government be allowed to have access to. The failures of honouring American rights and dignity thus far must be rectified by transparent and honest accounts from the National Security Agency about their mechanisms of tracking potential threats and treatment of unrelated personal data. Ultimately, no government should have the authority to ubiquitously and opaquely conduct their surveillance. The people should be informed before supporting beyond intent to include the implementation.