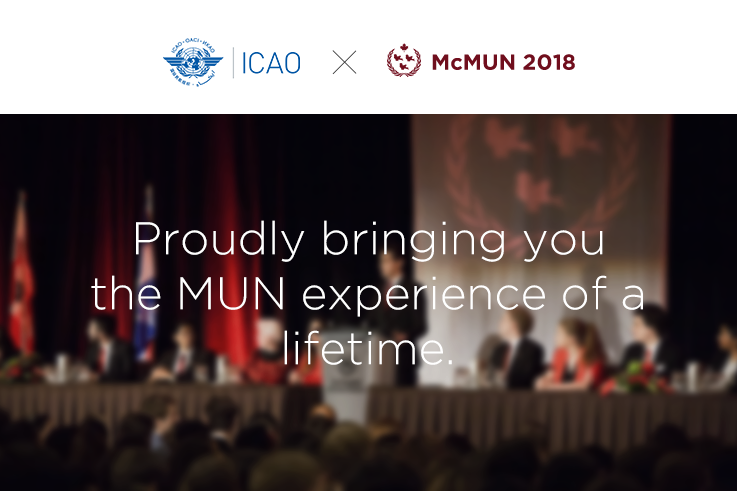 McGill Model United Nations (McMUN) returns to Montreal this weekend for the 29th time, bringing hundreds of international students together once more. 2018 is a landmark year for Canada’s largest model UN conference, with three committee sessions being hosted at the International Civil Aviation Organization (ICAO), an official UN agency whose headquarters are located in downtown Montreal. This is a unique opportunity for delegates and staff alike, who will be working in 29 diverse committees, covering topics ranging from the 2022 World Cup in Qatar to the Greek Debt Crisis.

ICAO, which was established in 1944 in Chicago, manages the Convention on International Civil Organization. It works with 192 member states to efficiently establish and put in practice the international civil aviation Standards and Recommended Practices (SARPs). The SARPs strive to be environmentally and economically sustainable, while also guaranteeing the safety of all parties involved. It further provides assistance to states aiming to develop aviation programs. In essence, ICAO currently acts as the highest authority on all matters pertaining to air space and its regulation.

ICAO additionally endeavours to work with a plethora of UN agencies, such as the World Health Organization (WHO) and the World Toursim Organization (UNWTO). As such, it is a highly integrated agency, and a critical node in the network of UN operations. Its function is multilateral in nature, meaning that its decisions with regards to aerial governance affect both official state decisions and civilian matters, such as plane travel.

As space exploration steadily progresses and access to space is democratized, the agency’s role and relevance are bound to rapidly expand. In recent years, private enterprises, such as Elon Musk’s SpaceX, have invested significant amounts of capital into spatial infrastructure and launched ambitious exploration projects. This has created a pressing need for the creation of a new set of international guidelines to avoid territorial clashes in space. During the four-day conference, the ICAO: 2025 committee will specifically address what this potentially entails for the future in terms of militarization, weaponization and privatization of space.

Attending committee sessions at the ICAO thus makes this year’s McMUN an even more immersive experience for participants than in previous years, as they will be able to grapple with important concepts in the very building where they might be discussed in the near future. Beyond instilling a sense of authenticity in debates taking place over the weekend, the cooperation of the UN agency also distinguishes the conference from others in North America. This adds to the appeal and reach of the event, which attracted more than 1500 delegates from around the globe this year.