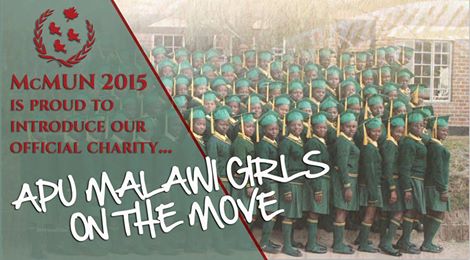 During the 2015 McMUN Opening Ceremony the chosen charity for this year’s assembly was announced to be the Atsikana Pa Ulendo (APU) Malawi Girls on the Move in Malawi. This non-profit organization was co-founded by Canadian teacher Christie Johnson and Malwian teacher Memory Chazeza. 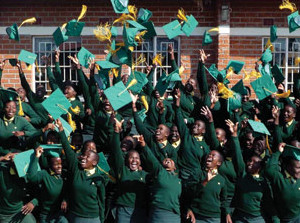 On September 6th, 2010, the institution started off with over 320 girls, and has been growing ever since. They have 12 full-time teachers, in addition to 5 part-time staff members. All students are urged to take the following classes: English, math, Chichewa, agriculture, biology, geography, social studies, life skills, Bible knowledge, physical science, and history. Each classroom is composed of 40 girls in total, to ensure they receive the best possible attention. One of the aims of the institution is to impart leadership skills and community development.

In 2009, the institution received a 100% pass rate for all their students, an achievement unheard of for girls from underdeveloped backgrounds.

The APU’s goal is to provide access for young Malawian women to have a chance at being educated, just like all the men in the village. Johnson and Chazeza believe that the key to giving the girls a choice in the way they want to live their lives accordingly, is education. As a result, this enables them to share their dreams with their family and community. The power they have been waiting for, will finally be given to them, after all these years of being silent. According to APU, “it is their voice that will give them the power they need to transform their lives and the lives of their future families. Together, with their supporters in Malawi and in Canada, they are making this dream real; empowering their students to see that they too can have dreams and live to see their dreams come true.”

The school not only offers classes filled with valuable course content, but it also provides extracurricular activities, including a chess club, debate club, choir, netball team and many more.

This year, thanks to the efforts of McMUN and its generous donors, Atsikana Pa Ulendo will be able to sponsor four years of education for Gritter Mdyettseni, who was personally selected by Memory Chazeza.

Sass Wodoslawsky, Deputy Director of Public Relations for McMUN 2015, was honoured to announce this year’s chosen charity. The charity was suggested by Gautham Krishnaraj, the Undersecretary General of Finance, who had closely worked with Atsikana Pa Ulendo in the past. McMUN will coordinate with Atsikana Pa Ulendo to ensure that Gritter will get the best possible education through the funds raised during the conference.

In the words of a past APU graduate “In Malawi when you educate a girl, you are not only changing her life and that of her family, but of the whole village. You create a culture of knowledge and generations of change makers now and to come.” McMUN, through this charity event is empowering Gritter to not only change her life, but also the lives of her entire community.