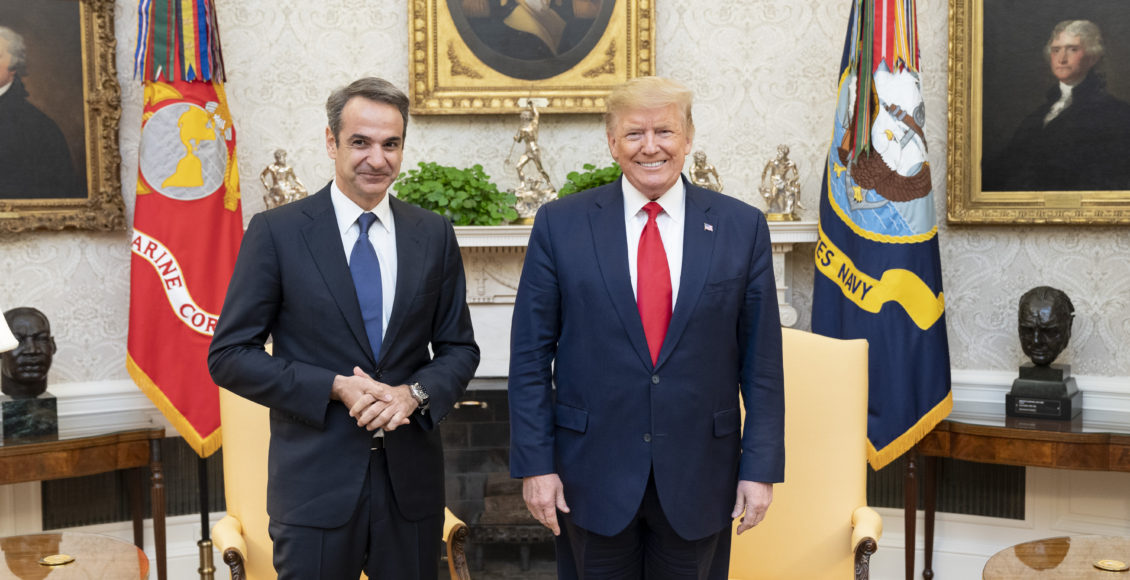 In an effort to de-escalate tensions, on Jan. 7 2020,  Greek Prime Minister Kyriakos Mitsotakis joined Donald Trump for a meeting in the White House. It was the first meeting between the two, but Athens was visited by Trump’s U.S. Secretary of State in the past. Its purpose was to discuss Greek relations with the United States and how recent developments have shaped them.  It was also the first press conference for President Trump since the assassination of Qasem Soleimani, an Iranian major general of the Islamic Revolutionary Guard Corps (IRGC).

Mitsotakis and Trump went on to discuss the relationship between Greece and the U.S. and where it currently stands. Shortly after a quick discussion on Greece, the press conference was dominated by questions on Iranian-American relations and the decision to assassinate Major-General Soleimani. However, several issues regarding the relationship between the two countries were brought to the light, specifically their alliance and a potential military agreement, which includes Greece purchasing F-35 aircraft.

Recent Developments in the Mediterranean

The burning question for Greece is the U.S. position on the recent Turko-Lybian agreement signed in November 2019. The maritime deal reached between Libya and Turkey, at its core, allows the two countries to develop a specifically defined area of the Eastern Mediterranean for natural gas, while Greece, Italy, and Israel would have to ask permission from Turkey to make use of the region.

The agreement has sparked a backlash, especially from Greece and Cyprus. Greece’s discontent stems from the position of the island of Crete. The Cretan shelf touches the boundaries of the area in concern, and Greece argues that the shelf cannot be included in the agreement due to its status as Greek territory. Cyprus also feels the agreement is a violation of international laws and conventions regarding the sea. On the other hand, Turkish President Erdogan states that islands do not have a shelf and thus, Greece’s argument is invalid. The Greek government has already expelled the Libyan ambassador from Greece, while it pulled its own from Libya.

Throughout the escalating tensions, Russia, Libya, and Israel have also been involved. In July 2019, Turkey bought Russian missiles in the name of national defence. Turkey defied the United States’  wishes in making this purchase, and they ignored American threats of sanctions. Moreover, the Mediterranean has recently seen an alliance formed between Israel, Cyprus, and Greece, embodied in the EastMed gas pipeline deal, signed in Athens on Jan. 2 2020. Turkey vehemently opposes this agreement.

The two leaders assured each other that their countries share close ties. Mitsotakis also backed the President’s decision to end the life of Soleimani, saying that if the United States saw it fit, he could not condemn it. This is a position that most European leaders do not share.

Mitsotakis also went to the meeting with President Trump in hopes to discuss the Turkish-Libyan agreement. While the President stated that the United States does not support it, Trump did not condemn the agreement as illegal. Greece, on the other hand, believes that the agreement, and particularly Turkey’s participation in it, is against international law. Trump went on to describe the situation as ‘a mess’, due to Libya’s involvement. President Trump, however, urged President Erdogan to resolve these differences in the Mediterranean, as tweeted by Trump’s special assistant, Judd Deere.

Today, @realDonaldTrump spoke with President Recep Tayyip Erdogan of Turkey. The two leaders discussed the need to eliminate foreign interference and maintain the ceasefire in Libya. The leaders agreed that the violence being carried out in Idlib, Syria must stop.

Meanwhile, the Greek Prime Minister is planning a purchase of U.S.-made F-35s, in order to overhaul the Greek Air Force. Updating the Greek military is a sign of the escalating tensions in the Eastern Mediterranean. Following disagreements on the refugee question, Greco-Turkish relations seem to be deteriorating further.

What is there to lose?

Greece has a lot at stake in the Eastern Mediterranean. As mentioned, Greece feels that its rights in the Mediterranean are being violated by the Turko-Libyan agreement. This issue is of elevated importance to both Turkey and Greece. The agreement would lead to an elevated Turkish presence in the Eastern Mediterranean, something that would threaten Greece and Cyprus’ sense of security and autonomy in the region. In light of these recent developments, the Greek Prime Minister hoped to establish U.S. support for Greece, but the United States has remained more neutral on the matter. Turkey has already been met with discontent for its decisions by European leaders, which could influence its potential as an EU member-state. To resolve these tensions to everyone’s benefit, cooperation in the region is necessary more than ever.  Hopefully, the matters at hand will be resolved through cooperation on both sides of the Aegean.