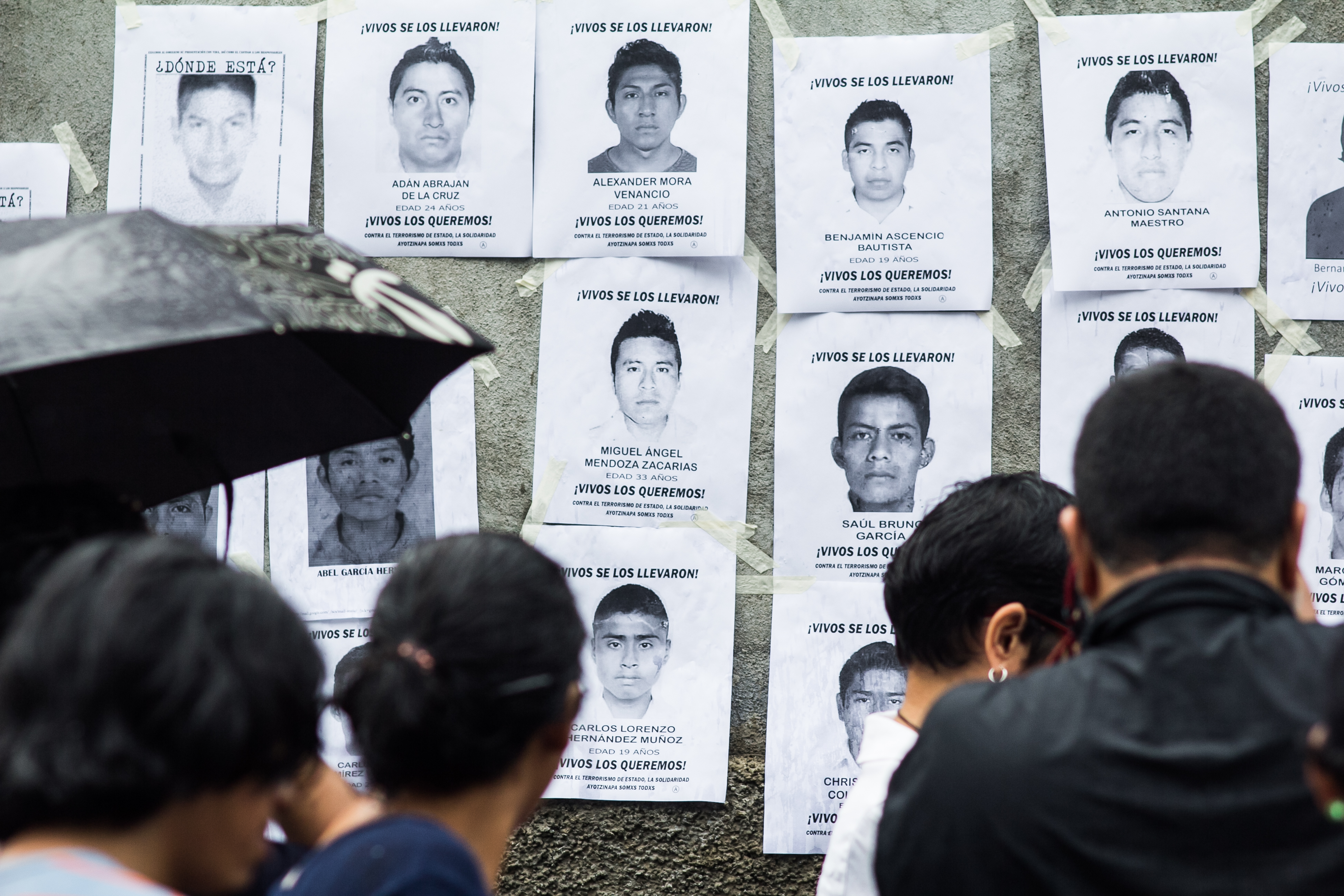 While the recent narco-crime related incidents in Mexico might come as a surprise to some, the presence of drug cartels in government is not new to the nation, especially not to the town of Iguala. Found in the infamous state of Guerrero (which holds the highest murder rate in the country[1]), Iguala is known for its perfect location as a transit point for illicit goods including narcotics. The Mexican federal government has been fighting a drug war since 2006 and the country has grown to accept the “stubborn fact” that “there is practically no rule of law in the country”.[2] Guerrero especially has become known as a “narco-state” in Mexico.[3] Corrupt municipal police has become the norm, leaving many crimes unreported, as citizens fear that “local authorities are in cahoots with the perpetrators”[4]. This fear was only further confirmed by the events in Iguala last month.

On September 26th, a group of students from the all-boys Ayotzinapa Normal School – a radical left-wing rural teacher’s college – were shot at by Iguala municipal police.[5] The students – known as “normalistas” – were in Iguala to raise money and protest “discriminatory hiring practices” for teachers.[6] The attack resulted in 6 dead (3 students and 3 bystanders), 25 injured, and 43 missing.[7] At least 30 students were taken away in police cars while a dozen others ran off into the woods to escape the gunfire. One student who ran off, Julio Cesar Mondragón (nicknamed “El Chilango”), was found with his eyes gouged out and the skin of his face sliced off.[8] Kidnap, torture and mutilation have all been used by cartels in the past as warning signs or “ways to instill fear and intimidation” in the people.[9]

A month later, it is still unclear why the police shot at the students in the first place. Some say the police attacked “under the belief that the students had kidnapped the drivers and buses”[10] while others point at the mayor’s connection to the Guerreros Unidos (Warriors United) cartel. People claim that the mayor of Iguala, José Luis Abarca, “is not very far from this organized crime group, that he tolerates it, or is directly involved.”[11] His wife, Maria de los Angeles Pineda Villa, has familial ties to the cartel group with 3 of her brothers as members.[12] The media has given Pineda Villa the name of “Lady Iguala”[13] and have connected her to the attack on the “normalistas” as that night she had organized a party to “increase her profile for an eventual run at the mayor’s office herself.”[14] The police attacking the students could well have been an attempt to keep them away from Pineda Villa’s event, using her connections in the Guerreros Unidos to do so.

The Ayotzinapa Normal School also has a history with the mayor of Iguala, with the students conducting protests regularly. Their “long-standing political feud with the mayor and his police”[15] could also be seen as reason for the attack along with their “left-wing political beliefs” that threatened Abarca’s government. To add suspicion, Abarca, his wife, and the chief of police, Felipe Flores Velazquez, have all been missing since the attack, allegedly on the lam. Abarca has officially been removed from his position of mayor and federal forces have “disarmed the Iguala police & have taken over security of the town.”[16] While all of Iguala and all of Guerrero “knew who Abarca was”[17] and rarely trusted his government, the federal government held more promise.

President Enrique Pena Nieto was elected 2 years ago with the promise to put an end to violence in Mexico. The attack on the “normalistas” in Iguala last month poses a major challenge for the President as families of the missing 43 and concerned citizens around the country ask for answers. More than a thousand federal officers have been deployed to search for the missing students[18], but it is not enough. The governments in Mexico are now seen as “narco-governments” with big drug cartels either controlling government officials or “are themselves the government officials.”[19] Students from the Ayotznipa Normal School and their families have been marching in protest over the past month, gathering outside government buildings and fighting with riot police. On October 22nd, masked men with Molotov cocktails stormed and set fire to the main government building in Iguala and looted a nearby shopping mall.[20] The social and political unrest in Guerrero has incited protests and demonstrations in New York, Barcelona, Paris, Chicago, Santiago and many other cities around the globe.

Up to 50 police officers have now been arrested due to their suspected involvement in the September 26th attack and the missing 43.[21] A few members of the Guerrors cartel were captured and confessed to killing 17 students[22], leading federal officials to search for mass graves around the area the attack took place. Since the search began, multiple mass graves have been found, but DNA tests have come back negative for the missing boys.[23] The unearthing of mass graves in Mexico has become common practice since the beginning of the drug war in December 2006. In 2010, a mine shaft was found with 64 bodies inside, most dismembered and some decapitated – the obvious work of drug cartels.[24] Approximately 100,000 people have reportedly been killed since the beginning of the drug war[25], but as more mass graves are discovered, the people of Mexico fear that number is far larger. Tens of thousands of people are still missing in the country[26], their families fearing they may never find their bodies at this point. Chants of “they took them alive, we want them back alive”[27] are being heard in many countries as more people are demanding information on the missing 43 boys. With mayor Abarca and his wife on the run and drug cartels calling the shots in local government, all eyes are on President Enrique Pena Nieto and his federal government in keeping the Mexican people safe as the country enters the ninth year of its bloody drug war.