Midterm Wars: The Establishment Strikes Back—Or Does It? 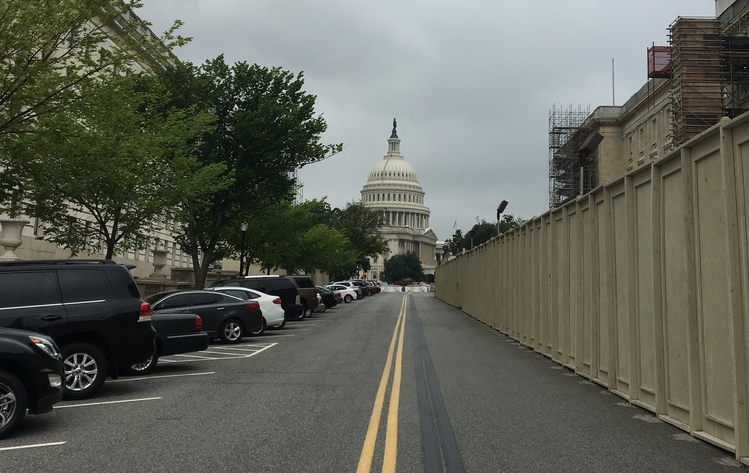 The dominant narrative of the 2016 U.S presidential elections was that of a revolt against “the establishment”, an ill-defined but popular term that conjures images of out-of-touch political elites, backroom deals shrouded in cigar smoke, and scheming patronage networks. On the left, Bernie Sanders railed against the Democratic National Committee, accusing it of showing favoritism towards Hillary Clinton, an allegation that proved not entirely false. The DNC became a bogeyman that allowed Sanders to build his support among disaffected Democrats and independents, especially when paired with trenchant criticisms of Wall Street. On the right, Donald Trump consistently attacked the establishment, to him a system that has facilitated the hollowing out of American communities through deindustrialization and mass immigration. The notion of the establishment loomed large in Trump’s rhetoric and allowed him to make inroads among voters angry with the direction of the country. 82% of general election voters who saw bringing change as their priority in a candidate voted for Donald Trump while 68% of those who believed the country was headed in the wrong direction supported him, lending credence to the theory that the American electorate remains angry and ready to take on the establishment. However, for all the talk of anti-establishment revolt, insurgent challengers since the 2016 election have largely fallen flat.

The May 8th primary elections in Indiana, North Carolina, Ohio, and West Virginia demonstrate the potential limits of anti-establishment populism, especially when delivered through a flawed vehicle.

In West Virginia, a state which preferred Donald Trump over Hillary Clinton by a 41.68% margin, Democratic Senator Joe Manchin is locked in a tense political battle for re-election. Coal baron Don Blankenship entered the race in November 2017, attacking Senate Majority Leader Mitch McConnell as well as Manchin, positioning Blankenship as an outsider opposed to the D.C establishment. However, during his tenure as the CEO of Massey Energy, a major coal company, Blankenship violated safety standards at the Upper Big Branch (UBB) mine, leading to the death of 29 miners and his subsequent imprisonment. In one of the few states where mining remains important, representing 13% of state GDP, as opposed to 2% of national GDP, this should have disqualified Blankenship from gaining traction. Nonetheless, Blankenship attempted to somehow incorporate his lawbreaking into an anti-establishment narrative. The ex-coal baron ran a poorly-sourced commercial titled “US Government Killed 29 Miners”, which highlighted a few peoples’ concerns about mining regulations as ostensible proof that UBB was not Blankenship’s fault and that instead, he was the victim of the political establishment class. The absurdity of this ad was soon surpassed by another commercial, quickly gained notoriety. A few weeks later, Blankenship released another commercial, in which he strangely called Mitch McConnell “cocaine Mitch” and used a racial slur against Asian-Americans. He based his campaign on the Trumpian notion of being a businessman, not a politician, tapping into the anger West Virginians felt at a government captured by special interests and dysfunction. In the apparent vindication of those predicting an anti-establishment revolt in 2018, this rhetoric seemed to work, when in the campaign’s last days, two internal polls showed Blankenship leading his main rivals, Attorney General Patrick Morrisey and 3rd District Congressman Evan Jenkins. Because of Blankenship’s responsibility for the death of miners, this seemed strange, but it highlighted the potential appeal of an anti-establishment run.

However, despite the hype, Blankenship won just four counties, finishing in third place with 19.9% of the vote. Only one of the counties he won, Mingo County, is a heavy-coal mining region, showing that maybe his role in the UBB disaster turned off coal country. Blankenship at first appeared to successfully play the anti-establishment card until final results demolished this narrative. His insurgent campaign couldn’t overcome his track record of endangering workers and his opponents’ credentials.

Nearly 40 years later, and after a few ill-fated and quixotic presidential bids, Kucinich entered the gubernatorial race as an unabashed progressive. His platform included a ban on natural gas extraction by fracking, universal healthcare, and publically funded abortion access, all under the catchy populist slogan “#PowerToWeThePeople”. For years, Kucinich has opposed moderate Democrats, accusing them of rolling over for Republicans and special interest groups. His gubernatorial bid continued this trend, and Kucinich levied a barrage of attacks from the left on his primary opponent, former Consumer Financial Protection Bureau chief Richard Corday. Kucinich additionally gained the endorsement of Bernie Sanders-aligned group Our Revolution, attesting to his support from much of the anti-establishment left wing. However, like Blankenship, Kucinich’s history made him anathema to the electorate.

In 2017, Kucinich spoke to a pro-Syria group for $20,000. The group Kucinich spoke to, the Association for Investment in Popular Action Committees, is closely tied to the pro-Syrian regime Syrian Solidarity Movement. While he returned the money, this incident nonetheless hinted at Kucinich’s potential sympathy for Bashar al-Assad, who employs chemical weapons against civilians. Adding to these fears was the fact that Kucinich, alongside controversial Hawaii 2nd District Representative Tulsi Gabbard, visited al-Assad in 2017. Even weirder was Kucinich’s link to Fox News, the media darling of the American right wing. For years, Kucinich appeared as a commentator on Fox News. He praised Trump’s inaugural address and perpetuated President Trump’s rants about a hidden ‘deep state’ thwarting his administration. While by itself, praising President Trump’s inauguration is not damning, it seems uncharacteristic for a self-proclaimed progressive. Like Blankenship, Kucinich’s performance in the primary was embarrassing. He finished with just 22.9% of the vote, losing by a nearly 40% to Richard Cordray and winning no counties, losing his home county of Cuyahoga by a 14.2% margin.

Beyond these two examples, insurgent campaigns have not found much success in 2017 and 2018. In Illinois’ Republican gubernatorial primary, conservative State Senator Jeanne Ives came within 3% of defeating incumbent Governor Bruce Rauner. However, only 26% of Illinois residents view Governor Rauner favorably, and just 49% of Republicans do. Ives’ inability to defeat a governor unpopular even with his base doesn’t bode well for the narrative of insurgent victory. Also in Illinois, left-wing Democrat Marie Newman, backed by anti-establishment groups like Our Revolution and Justice Democrats, lost to incumbent Congressman Dan Lipinski by 2.4%. Her campaign was touted as a sure success for the left wing of the Democratic Party, but the culturally conservative 3rd Congressional district delivered victory for Dan Lipinski once again. The fall of anti-establishment candidates continued through more elections; pragmatic veteran Gina Ortiz Jones beat Our Revolution endorsed Rick Trevino 67.9% to 32.1% in the Texas 23rd District primary, former US Senator Mike DeWine defeated right-winger Mary Taylor by a nearly 20% margin in the Ohio Republican gubernatorial primary, and former Congressional staffer Liz Watson won almost every county in Indiana’s 9th District in her primary against Our Revolution backed Dan Canon.

Even what some have touted as an anti-establishment success, the slim, surprising victory of nonprofit executive Kara Eastman over former Congressman Brad Ashford in Nebraska’s 2nd Congressional District, did not reflect a massive populist insurgency. While Ashford possessed an endorsement from the establishment Democratic Congressional Campaign Committee (DCCC), Eastman possessed support from other corners of what might be considered ‘the establishment.’ She even touted the backing of the Douglas County Democratic Party Chair, Crystal Rhoades, who leads Nebraska’s largest county party. Moreover, she picked up endorsements from some mainstream labor unions like the Operative Plasterers and Cement Masons Local 538. Her platform, while decidedly more progressive than Brad Ashford’s, reads like a standard left-leaning Democratic one, omitting the fiery rhetoric of a Bernie Sanders-style outsider. Ashford was outworked and outflanked to the left, which on one hand represents a victory for the progressive wing of the party, but doesn’t necessarily mean that anti-establishment forces are taking over. Nonetheless, in this moderate suburban Omaha district, a left-leaning candidate may not be the best fit, leading political rating agencies to downgrade the Democrats’ chances after Eastman’s win. What some leftist Democrats might erroneously claim to be a win for the insurgent left may turn out to be more of a liability than anything. At this point, though, nobody knows what surprises a Democratic wave might bring.

Perhaps the problem facing insurgent populists is that more often than not, these candidates’ records are tarnished by eccentricity, extremism, or enigmatic positioning. Candidates running against the establishment often clash with pragmatic elements of their parties. But have the Trump/Sanders insurgencies simply been absorbed into the partisan mainstream? After all, rhetoric that once posed a threat to the partisan establishment has now largely been co-opted by this same establishment. Take, for example, Donald Trump’s constant exhortations to ‘drain the swamp’. This catchy slogan has become a generic Republican refrain, employed by mainstream candidates like now-Kansas Congressman Ron Estes, who falls far from being anti-establishment in his voting. This trend mirrors the fate of the Tea Party, once considered an outsider force bent on taking down established Republicans and eventually co-opted into the extant party brand. After an initial upsurge of success from 2010 to 2012, Tea Party primary challenges began to falter as incumbent Republicans employed Tea Party rhetoric and moved right on the issues. The direction of the Republican Party shifted course from George W. Bush’s ‘compassionate conservatism’ to a more purified strain of small-government conservatism. On the Democratic side, a similar trend emerged after Bernie Sanders’ astoundingly strong primary performance. Previously moderate, establishment bulwarks like New Jersey Senator Cory Booker and the Center for American Progress now support single-payer universal healthcare, a left-wing idea touted by Bernie Sanders in 2016. Many members of Congress who introduced a $12 minimum wage bill in 2015 now back a $15 minimum wage. These leftist policies gained traction among establishment Democrats when mainstream partisans realized that adopting progressive policies could pacify agitated activists.

It could be that co-optation represents a victory for anti-establishment forces. After all, their goals are becoming more tangible as mainstream members of each party advocate for them. Simultaneously, though, the recent defeats of anti-establishment candidates appear to represent a loss for the movement. The co-optation of left-wing and Trumpian ideals respectively allows members to insulate themselves from primary challenges. While it once appeared possible that both parties would face populist upheaval, the electoral verdict remains decidedly negative for anti-establishment forces, although the policy verdict is more hopeful.