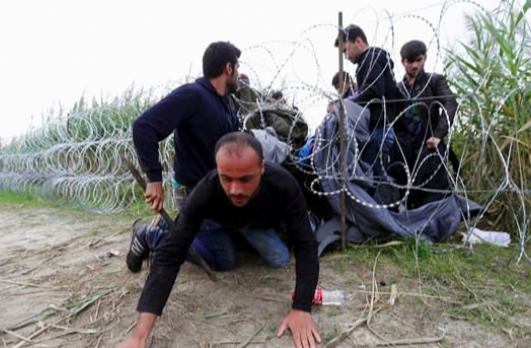 After undergoing significant modifications since it was first announced in November of 2015, the EU-Turkey Joint Action Plan has officially gone into effect as of Monday, April 4. The controversial accord has provided for the first wave of deportations of irregular migrants, with nearly five-hundred to be returned from Greece to Turkey by the close of this week. The rushed implementation of the readmission agreement by Greek officials comes as a firm declaration from Brussels as well: the backdoor to Europe is now shut. However, reports reveal that the plan may not be as significant of a deterrent as initially hoped. Since the deal came into effect, an additional 4,000 migrants have arrived on Greek shores.

Following the approval of the Plan by the Greek Parliament on March 20, migrants who arrived illegally in Greece after this date face deportation if they fail to apply for asylum, or if their application is rejected after processing. As part of the “One for One” program negotiated by EU leadership, for each refugee returned to Turkey, European states have pledged to resettle another whose asylum paperwork has already been processed, thus adding to the mounting number of Syrians who have been promised sanctuary since the outbreak of the Civil War nearly five years ago. Germany has pledged to accept 40,000 refugees over the next few years, France has set a quota of 30,000 and Portugal nearly 10,000. The other twenty-five EU member states have yet to announce their share of the distribution program, with the United Kingdom declaring it will formulate a separate plan. However, migrants without “legitimate” claims to asylum in Europe potentially await deportation once more, this time at the discretion of Turkish officials.  The first boats left Greek ports Monday evening, carrying mostly Afghani and Pakistani males to Dikali, a city along Turkey’s Aegean coast that officials have determined will be the main processing cite for the duration of the program.

From a logistical standpoint, the implementation of the plan has not been progressing as smoothly as initially hoped. Reports reveal that Greek officials are overwhelmed merely by the sheer number of people they have been tasked with managing. The bankrupt state has been placed under yet more financial strain since closure of the Macedonian border trapped an unexpectedly high number of migrants on the Greek side. Mustering the resources and facilities necessary to provide for these “visitors” has proven to be quite the challenge. Supplementary support or monetary compensation promised by Brussels has yet to materialize. Frontex, the EU border agency, had initially pledged to deploy 2,300 officials to assist Greece for the Plan’s April 4th start date, yet less than 10 percent have reported for duty. For those who have arrived, Greece has struggled to provide the required lodging and professional equipment. Additionally, only eight Frontex control boats have been stationed in Greece amid concerns that migrants are opting for migration routes traditionally favoured by North African economic migrants that now leads smugglers to disembark on the shores of Italy. It should come as no surprise to EU officials if this route rises in popularity in the summer months: migrants will now make the calculation that, should they place their lives at risk, the journey to Italy presents a greater hope for access to Europe, given that significant barriers to admission have now been erected along the Greek route—both literally and through bureaucratic means.

Since the Joint Action Plan was announced, Greek officials have been working to quell the discontent simmering among the detainee population after a computer system malfunction on March 19th prevented many new arrivals from exercising their right to apply for asylum. Grumblings amongst the migrants began following the closure of the Greece-Macedonia border late this winter, but have intensified as of late. According to reports published by The Guardian and the UNHCR, “rioting and rebellion” by desperate migrants ensued as news of the Joint Action Plan reached holding camps, triggering great concern regarding public security from Athens. At retention centers on the island of Chios, rioting destroyed the wire fencing that enclosed camps, in addition to processing facilities and the equipment used by the Greek government to provide relevant immigration paperwork. A testament to the lack of resources the Greek government has at its disposal,thirty security personnel at the site of the chaos in Chios were responsible for monitoring 1,800 migrants. Similar mayhem ensued at the Athenian port city of Piraeus and along the Macedonian border, where approximately 11,000 people have amassed since the border closure. Although Athens has expressed its concern following these events and has suggested that Brussels temporarily provide additional support and resources to aid in containment and processing measures, EU leadership has yet to formally respond.

The EU stands reliant on Greece’s ability to process the migrants and Turkey’s ability to manage them for an undetermined period into the future. However, it is clear that Turkey is also not fully prepared to bear the burden of the readmission program: no formal processing centers, holding facilities or other relevant infrastructure have yet been constructed in Dikali. Curiously, local authorities have pledged to the community surrounding Dikali that there are no plans to construct permanent settlement camps for those migrants who have been approved to remain in Turkey as they await admission to Europe. No one has yet asked Turkish authorities where these people are to go, or if they are to be transferred a third time to preexisting refugee camps along the Syrian border. Adding to international concern is the fact that Turkey has been deemed a “safe third country” within the terms of the Joint Action agreement, thus guaranteeing refugees the right to sanctuary in Turkey. But the recent spike in PKK attacks on “soft targets”, both within the Kurds’ traditional strongholds in eastern Turkey and in the more prosperous cities of the west, brings this notion of “safety” into question. The situation is all the more grievous given senior PKK officials’ recent declaration that, “at this stage in [their] fight”, they are willing to employ whatever means necessary in order to further their cause.

Adding to this delicate dynamic are reports that Pentagon officials have ordered the dependents of American military and diplomatic personnel home amidst security threats in the western areas of Adana and Izmir. Incirlik Air Base, located in Adana, is the most active American facility in the region, providing a staging post for the bulk of the Western air sorties against the Islamic State. German officials have heeded similar security concerns following intelligence reports warning of a looming terror threat on diplomatic facilities.

Apart from security concerns on the ground, the most worrisome development for the EU leadership will be a recent Amnesty International report released last Friday. According to unnamed government sources and witnesses in Hatay Province, the Turkish government has allegedly been returning thousands of unaccompanied Syrian minors back to their war-torn country since the implementation of the Joint Action Plan: a clear violation of the principle of “non-refoulement”, which states that the state cannot return persons to areas where their lives or freedoms are in direct danger. Although the Turkish government has denied Amnesty’s reports, this behaviour stands in contravention not only of international law, but also of the EU-Turkey agreement in return for which Turkey has gained significant financial and political concessions in recognition of its humanitarian engagement. President Erdogan insists that Turkey “has not turned its back” on Syrian refugees. Nevertheless, the EU leadership has yet to formally comment on Amnesty’s allegations. It can be assumed it most likely will not unless more substantive evidence materializes. Brussels realizes it is gambling on Turkey in order to ensure the success of the Joint Action Plan. Hence all confrontation will be avoided unless more egregious violations come to light. If, however, the report does prove accurate, then what could be more egregious than returning unaccompanied children to the crater of human misery that is Syria?

Europe’s social and political climate has changed significantly since the ink dried on the finalized plan on March 18. European popular sentiment against Syrian refugees has intensified at a seemingly exponential rate. Recent German state elections delivered a significant blow to Chancellor Merkel’s CDU, offering a public verdict against her liberal migration policy, Europe’s most accommodating. Both the far-right, anti-immigrant Eurosceptics of the “Alternative for Germany” (AfD) and the ultra-liberal “Green Party” gained significant ground in this past election. The rise of the far right and left should signal to Merkel the failure of her democratic faction to produce the results the public truly desires. But this sentiment is accumulating not just within Germany, but across other European states that have received less media attention. Xenophobia and mounting Islamophobia will only intensify as the details surrounding the March 22nd attacks in Brussels and the mysterious death of a security guard at a Belgian nuclear facility are made available to the public. Between taming public anger and attending to the EU’s humanitarian duties, Europe’s leaders have been caught in quite the political and moral predicament. Whichever force emerges triumphant will shape not just the future of European domestic politics, but that of the EU itself.