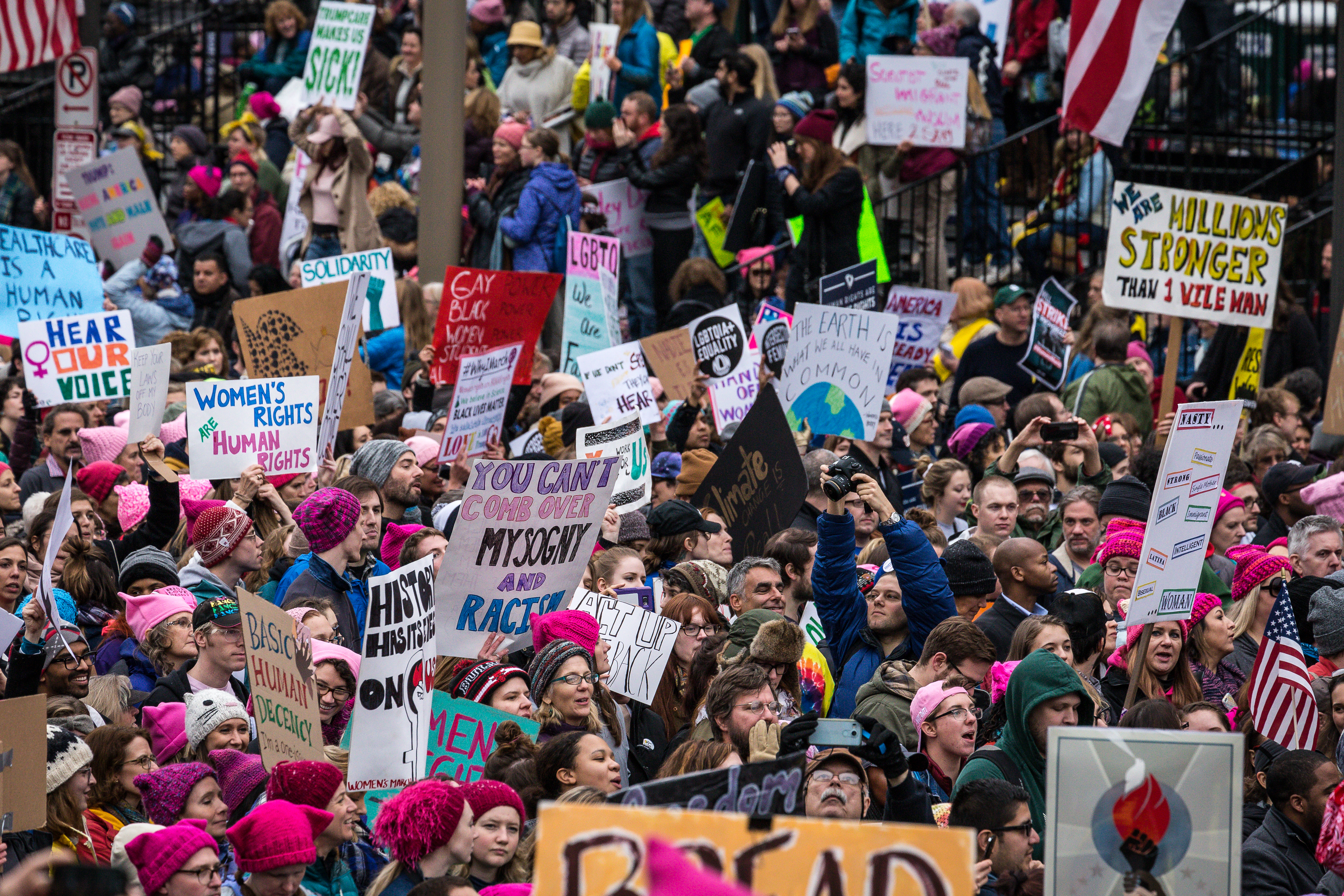 #pussygrabsback. #pussypower. #nastywomen. #whyimarch. #girlpower. Such were the incensed battle cries of women from across the world that echoed across the glittering cacophony of Instagram and Twitter last weekend following the Women’s March on Washington. If you were to place yourself in any one of the marches happening on the 21st of January, you would have seen people of all ages, races, genders, and religions all marching for the same purpose—to stand in solidarity in sending a message to the Trump government that “women’s rights are human rights.” This solidarity was a marked and apparent theme, from the bright signs, the flashy media coverage—and yes, to the eccentric pussy hats worn by young and old. Solidarity does not guarantee change, however. While its glitz and glamour did draw significant attention to women’s rights, the Women’s March, although well-intentioned, acted more as a façade for real change rather than the uplifting vehicle for reform it was proclaimed to be.

The end goal of any march ought not to be solely to bring about an increased awareness of specific issues, but to trigger political change. A simple change in ‘societal mentality’ is hugely insufficient—clearly it would be a much too abstract and idyllic form of ‘change’. No, real change is garnered through the passing of legislature and is something that is tangible with concrete effects. Of course, the natural argument would then be that such a march is necessary to create an environment in which real change can be forged. The flaw in such an argument, however, would be presuming that the current government is even marginally open to women’s rights change in the first place. Creating a social environment for change that is not in line with Trump’s ludicrous political mindset is certainly possible, as we have seen with the breadth of the march. Such a social environment unfortunately falls short as soon as it encounters his impermeable and dogmatic ego; as a result, it fails to translate into a political environment with the necessary seeds for effective legislation. Given his illustrious past of name-calling and sexual insults aimed at women, it is evident that gender equality and advancing women’s rights are not— and will not—be a priority at all for his administration. And this, clearly, is what the Women’s March fails to recognize. It is wonderful and progressive in principle, but occurred in a political climate destined to stymie true change.

What makes a protest march effective? If we refer to the work of Dr. Jacquelien van Stekelenburg of Vrije Universiteit Amsterdam, one of the world’s leading protest participation experts, there are two main points that make a march effective: if the protest causes major problems, and whether the political environment is favourable or not. The first point is a non-issue in the case of the Women’s March, since it was large-scale, peaceful, and positioned perfectly for maximal impact. But the second point is where it fails to be effective. According to Stekelenburg, a favourable political environment is broken further into four parts: “a democratic regime, a programmatic party system, a polity open to the challenger’s’ claims, and political allies’ support.” The first and the fourth sub-points are mostly covered, given the democratic nature of the political system and clear Democratic support. However, the second and third sub-points are where the Women’s March movement encounters difficulty. The new government certainly isn’t programmatic by definition or practice thus far, and Trump’s administration has not been remotely open to protesters’ calls for change.

In fact, policy in the polar opposite direction—that is, to oppress women’s rights—has even arisen a mere five days after the march. Just last week, Trump signed an order commonly referred to as the ‘global gag rule’, which limits funding to women’s and family health care providers around the world and aims at decreasing access to safe abortions in a warped attempt to justify his base’s pro-life ideals. This idea, however, is severely misguided: statistics have proven that each time the gag rule is reinstated by a Republican administration, abortion rates actually increase—unsafe abortions, mind you—strikingly coupled with an increase in maternal deaths.

Even with all the grandeur and breadth of the Women’s March—the media coverage, the celebrity endorsements, the likes on Instagram, the number of people who clicked ‘going’ on Facebook, and the almost obnoxiously bright pink pussy hats—the blatant ineffectiveness of the march still pervades reality. And it’s a sad reality. Without the accomplishment of real political change for women’s rights, all that glitz and glamour will amount to nothing more than rhetoric. If pushes for structural and legislative change do not follow, the march will have been an utterly superficial display of change and progress, and will have masked the real change that is still needed for gender equalisation.

With the Women’s March we also see a certain commercialisation of feminism. Companies such as “FCKH8” sell t-shirts aimed at the younger generation of feminists, screen-printed with large slogans such as “F-bombs for Feminism”. There is something very wrong about businesses profiting off of a culture of systemic sexism that has continually oppressed women. And although one may argue that any increased awareness is beneficial towards the movement, the “feminists” who are onboard only now, solely for the trendiness,” only serves to add to the superficial noise. “F-bombs for Feminism” do not detonate with political mechanisms for substantive change, no matter how flashy they are.

Although it is estimated that 3.2 million women marched across the United States in solidarity on January 21st, with at least 440,000 estimated in Washington D.C.—three times more than the reported inauguration crowd—the unfortunate reality is that for women’s rights progress, political change is required. That is something the march cannot easily guarantee, despite its glamour. Such a pressing need is even hidden to an extent by the spectacle. Ultimately, no matter its effectiveness or nature, one thing is certain: we cannot allow the fire ignited by the march to die down.We need to now harness these ‘F-bombs’ to incite the political change we need.