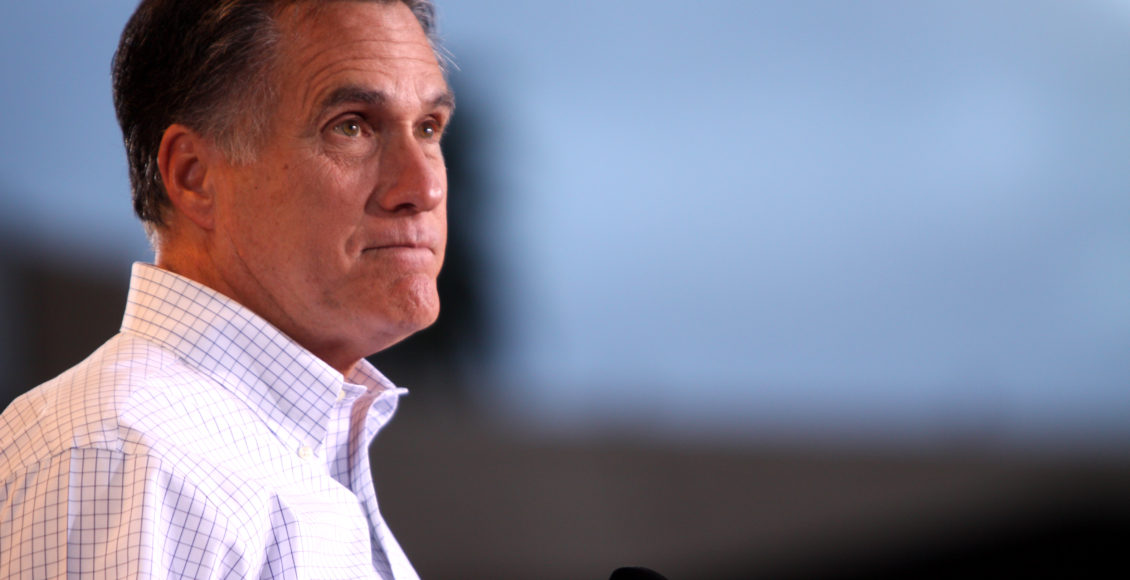 On February 5, 2020, the United States Senate acquitted Donald Trump on both impeachment charges that were brought against him by House Democrats. Although disappointing for Democrats, this outcome was predictable. Given that the majority of Senate seats are held by Republicans and that a two-thirds majority is required to remove a president from office, it was always extremely unlikely that this would mark the end of the Trump presidency. Throughout the proceedings, members of the Republican Party expressed support for Trump. If some admitted that his actions were wrong, they insisted that they were not criminal. Mitt Romney, a Republican senator from Utah and two-time presidential candidate, chose to go against his party.

Romney stood apart from his Republican colleagues for most of the impeachment saga, swiftly causing an outpour of opinions from all sides. He was among the first Republican figures to strongly condemn Trump’s behaviour and admitted, early on, to being on the fence about whether it warranted impeachment. When transcripts of  Trump’s phone call to Ukrainian President Volodymyr Zelensky surfaced, Romney was quick to call the president’s actions “wrong and appalling”. As the proceedings carried on, Romney stuck to his initial skepticism and was one of two Republican senators to vote in favour of hearing witnesses ⁠— including John Bolton, Trump’s former National Security Advisor ⁠— during the Senate trial. Then, moments before the final vote was cast, Romney took to the Senate floor to deliver a surprisingly moving speech, addressing his faith and ultimately breaking his silence about the choice he was faced with. He would vote to convict the President on one article of impeachment ⁠— abuse of power.

When the news broke of Romney’s vote, conservative media outlets and politicians were quick to pounce on his decision. While it did not change the outcome of the trial, the senator’s bold stance against the president came as a shock to many in Washington. Once a powerful figure in the Republican Party, he is now at odds with many fellow conservatives who are unafraid to speak out against him. During her popular segment on Fox News, Judge Jeanine Pirro suggested it was time for Romney to “get the hell out of the United States Senate.” Even his own niece, Ronna Romney McDaniel, who also happens to be the Chairwoman of the Republican National Committee, quickly distanced herself from him. And, in typical Trump fashion, Donald Trump Jr lashed out at Romney on Twitter, demanding that he be expelled from the GOP.

Mitt Romney is forever bitter that he will never be POTUS. He was too weak to beat the Democrats then so he’s joining them now.

He’s now officially a member of the resistance & should be expelled from the @GOP.

By breaking rank with his party, Romney knew he would engage in a lonely fight against the Trump administration. The president has, time and time again, shown that he values nothing more than complete, blind loyalty. Those who fail to meet this expectation usually face Trump’s public outrage, which often is enough to significantly impact their career in Washington. When addressing the Senate, Romney acknowledged this reality, highlighting that he was “sure to hear abuse from the President and his supporters” ⁠— yet, he chose to vote to convict. In Trump’s Washington, where going against the President often means being blacklisted, why would a man like Mitt Romney put his political future on the line?

As he read through the pages of his speech, it became clear that his decision ultimately came down to obligation. Honouring his faith to Mormonism and his oath to uphold the Constitution have been the guiding principles of his reflection. Romney was clearly saddened by the situation; on various occasions, he seemed to be on the brink of tears, pausing repeatedly to regain composure. While his conscience might very well have been what tipped the scales, such reasoning lacks the political calculus that usually goes into the senator’s political moves. Since being elected governor of Massachusetts in 2002, he has been described by many as a political chameleon, tailoring his views to benefit his own career.

Perhaps the most fitting example of this pattern is his on and off relationship with Donald Trump. Back in 2012, during his own presidential campaign against Barack Obama, Romney sought Trump’s endorsement ⁠— and got it. Just four years later, he delivered an anti-Trump speech urging citizens to vote strategically in the hopes of denying him the Republican nomination. Still, when Trump began building his cabinet, he publicly considered Romney for Secretary of State, a position which he ultimately offered to Rex Tillerson. Nevertheless, the senator’s wife, Ann Romney, assured journalists that her husband would have accepted the job had he been offered it. Since his election to the Senate in 2018 ⁠— again, after a Trump endorsement ⁠— Romney has re-emerged as a leading critic of the president. In light of this back-and-forth, which ebbs and flows following what is beneficial for Romney at a given time, voting to convict Trump might have been a calculated risk.

Vehement criticism from conservative media outlets and the Republican party might damage Romney’s national reputation, but what truly matters is the opinion of voters in Utah. His faith-based argument for voting to remove Trump from office resonated with Utahns, 55% of whom identify as Mormon. Following his vote, the Salt Lake Tribune titled its editorial “Mitt Romney’s Profile in Courage” and thanked the senator for honouring his faith. Even if this support fades, Romney is not up for re-election until 2024. By then, headlines painting Romney as frustrated and jealous will be long gone.

His vote also seems to have attracted praise from liberal media, who abundantly used the words “courage” and “bravery” to describe Romney’s decision. This support is peculiar, seeing as the senator has been a staunch conservative for decades. When he first ran for president in 2012, liberal media focused on missing tax records from his days at the head of a private investment firm, on his pro-life values, and on his incessant criticism of the Obama administration. Praise was nowhere to be found. If anything, this newfound admiration for Romney shows an unprecedented willingness to overlook key facts in the hopes of finding an ally against Trump. Nevertheless, the coverage helps build a positive narrative around Romney that will not go unnoticed.

We can only speculate what Romney’s true motivations are for challenging the Republican consensus in the impeachment vote. Preaching conscience over party may have been a way to, once again, reinvent his political persona or simply a last-ditch effort to attack a man who managed to achieve what he never could. And, of course, there’s always the possibility that Romney truly did vote his conscience based on religious and moral objections to Trump’s conduct, and not to personally spite the president. Regardless of what compelled him to vote against Trump, his actions and the response they have triggered highlight profound shifts underway in the American political landscape. Privileges associated with being part of the establishment have, by all accounts, faded. Ten years ago, his heavyweight status would likely have sheltered him from attacks from within his own party. Today, he stands largely alone in fighting for the moral high ground that used to be at the core of the Republican discourse.

The surprisingly intense reaction prompted by his vote in both left-leaning and conservative media also sheds light on a disturbing reality. In the Trump era, it has become abnormal for an elected official to follow due process and come to non-partisan decisions. Painting Romney as a hero or a Republican gone rogue only reinforces the narrative that to go against party line is to be one of a kind. This is dangerous. When he asked for additional testimonies, considered the available evidence and reached a personal conclusion, Mitt Romney was acting as a juror in an impeachment trial ⁠— no more, no less. This should not be seen as exceptional, nor should it be depicted as deplorable; it should simply be the norm.