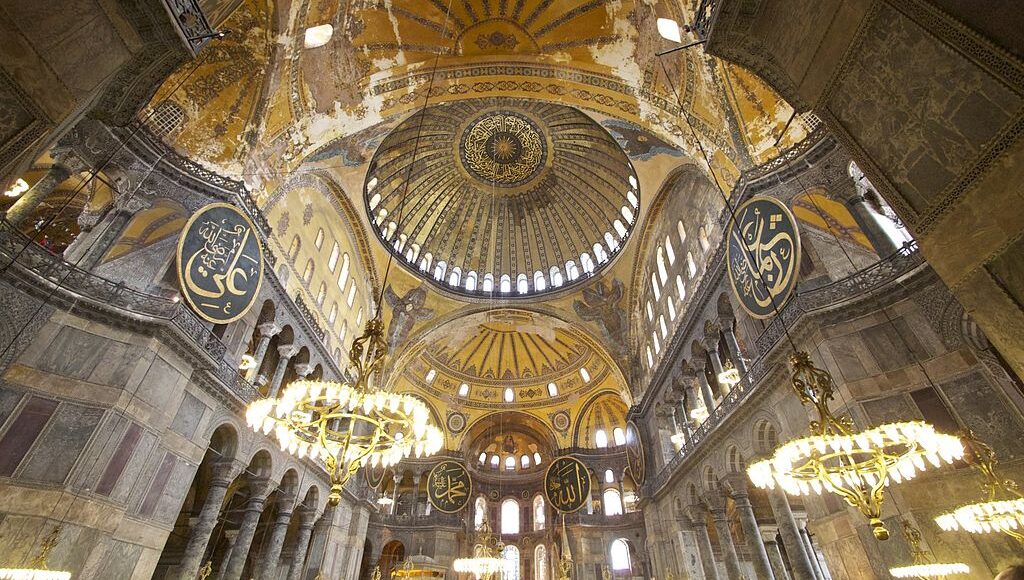 On July 10, 2020, the Turkish Council of State passed a resolution to revert Istanbul’s fifteen centuries-old Hagia Sophia museum into a mosque. This controversial decision has reverberated internationally. The re-conversion demonstrates that under the Justice and Development Party (AKP), the dynamic between Turkey’s religious institutions and government have changed drastically, with ever-increasing permissiveness towards a rollback of secularization. Beyond its domestic frontiers, this decision is also indicative of the government’s attempt to instrumentalise Islam as foreign policy leverage.

Proudly anchored in the historic district of Fatih, Istanbul, the Hagia Sophia stands as a monument that seems to transcend history. Built on the Golden Horn, the Hagia Sophia was the gem of the Eastern Roman Empire’s imperial capital. Straddling two continents, Constantinople served as an important nexus for trade, and the administrative and cultural capital for more than a millennium. Just as the city was at the physical centre of the Empire, so was the Hagia Sophia regarded as the metaphysical “centre” of its orthodoxy.

Spanning centuries of occupation, the Hagia Sophia represents a profound change from antiquity to the modern world, while also signifying dynamic continuity. This house of worship was the culmination of years of meticulous engineering, and the superposition of two other destroyed churches. With its harmonization of traditional Hellenistic architecture with Christian character, new concepts of beauty were defined, heralding a new cultural epoch.

Even after the rapid collapse of the Byzantine Empire, the Hagia Sophia remained a cherished cultural site. When the Ottomans conquered Constantinople in 1453, the church was converted into a mosque. The grandeur of Hagia Sophia was not lost on Sultan Mehmet II, who proclaimed the site as the new imperial mosque of the Ottoman Empire. Accordingly, the site bears features that reflect its history of diverse occupation.

In the wake of the First World War, the Republic of Turkey emerged as a nation-state successor to the Ottoman Empire. With the reforms of President Mustafa Kemal Atatürk, the new nation drafted a secular constitution on Kemalist principles inspired by Western laïcité. For both political and philosophical reasons, the new constitution dissolved the caliphate, and ushered in widespread secularization. Thus, after serving more than 500 years as a mosque, Atatürk officially transformed the Hagia Sophia into a museum in 1935.

The then-dilapidated mosque underwent a major transformation from a house of worship, and a symbol of imperial religious authority, to an institution of global cultural heritage. By assuming a new and cosmopolitan identity, a delicate balance had to be struck in preserving its duality as both a defunct house of worship and an institute of culture. In this conversion, mosaics that were previously veiled were open to the public, which facilitated the study of the site as a monument of universal historical value.

Yet, new concerns loom large over the site’s current identity. Turkish President Recep Tayyip Erdoğan has reversed its cosmopolitan status by reverting the Hagia Sophia into an active mosque. This decision demonstrates the paradigm shift taking place in Turkey as the government pursues an explicit policy of Islamization. His Justice and Development Party (AKP) has been accused of reshaping Atatürk’s vision of a secular, liberalized Turkey, into a republic of religious orientation.

Based on a court decision with presidential decree, Erdogan has changed the status of the Hagia Sophia with the consent of a religious populace to whom he wishes to pander. His party’s base was built when the Republic was thrown into political turmoil in the 1990s, after which the AKP emerged as a beacon of stability. In the early 2000s, the AKP, a party that had once separated from other Islamist movements, was readily acknowledged for its religious liberalization, and accredited for overcoming an economic crisis.

However, Turkey’s secular principles have suffered curtailment over decades, and the AKP’s long domination is symptomatic of this. Significant legislation has been introduced to promote a more pious, and religiously oriented society, discernible in the Directorate of Religious Affairs (i.e. Diyanet):  the state-controlled institution that is designed to administer the “neutral” regulation of religious affairs in the country. The AKP has transformed this nominally neutral entity into a political apparatus that exerts nationalist and pro-Islamist rhetoric over the state. Although its “neutral” function had been undermined in the past, the Diyanet has expanded its purview to things like issuing halal certificates, broadcasting religious programs, and commenting on social issues — strategically employed to legitimize AKP policies via religious sanction.

In addition to AKP’s shift to a decisively more Islamist party line, the ideology of the party has taken a marked shift towards Turkish nationalism and embodying a foreign policy that has been described as Neo-Ottomanist. The decision to revert the Hagia Sophia into a mosque is somewhat of a culmination of religion becoming more accepted in the body politic, with the explicit rededication of the mosque to “the souls of all who left us this work as inheritance, especially Istanbul’s conqueror [Sultan Mehmed II]”.  Not only has the Turkish government instilled a spirit of religiosity in its educational and ideological landscape, but in the physical landscape as well. More than 17,000 new mosques have been built by the government since 2000.

In 1991, a small Muslim prayer room was added to Hagia Sophia complex, accommodating those who wished to pray at the site whilst retaining a religiously neutral identity favourable to all stakeholders. With the Hagia Sophia’s new status, the site becomes a symbol of national and religious retrenchment by changing its fundamental identity to the singular ends of worship. This gesture represents more than the mere exercise of sovereign right. By emphasizing a robust Muslim nation, Turkey may also be seeking to challenge the geopolitical order of the Middle East, and emerge as a powerful antagonist to regional powers.

Nonetheless, Erdogan affirms that the Hagia Sophia will remain exalted as “the common heritage of humanity”, and “embrace everyone in a more sincere and original manner”. Be that as it may, the intrinsic nature of this historic site has been refashioned to be the cultural patrimony of one nation; it has been conformed to a singular narrative, where in reality it belongs to a far more entwined history. In fact, the mosaics themselves will be covered by curtains or lasers during the Muslim prayers, which Christians regard as iconoclastic infringement upon the original religious character of the site. Erdogan’s actions therefore claim an us-vs.-them Christian-Islamic binary to rally national support. Naturally, this decision has drawn international reaction, with dismay expressed from Greece and Cyprus, who threatened Turkey with sanctions. The United States, Russia, the Vatican, and UNESCO will also be reviewing the structure’s World Heritage Site status.

For a building that extols ‘Holy Wisdom’ (i.e. Hagia Sophia), perhaps it would be wise for its grandeur to be appreciated on a universal scale. For a monument that spans centuries of use, one should hope that the multiplicity of historic ‘voices’ residing within its sacrosanct walls have an equal chance to be heard. As a working mosque, however, great uncertainty remains on whether it will be deprived of the transparency needed to showcase and preserve its multi-narrative past. What is certain is that the AKP has monopolized on its status as a political symbol to strengthen its agenda. In a city that lies at the crossroads, the Hagia Sophia has been steered in a new direction, departing from its role as a symbolic anchor of secular democracy, peace, and universalism, towards a narrowing horizon.

The featured image “Hagia Sophia Interior” by Dean Strelau is licensed for use under CC BY 2.0.