Movies for the Working Class 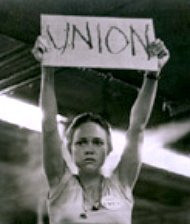 To go a little off of what I had done a few weeks ago here is a list of some movies that are sure to make you want to rise up and defeat the oppressive capitalist plutocrats that are the modern powers that be (in no particular order). Sorry for all the Western-centric films that are mostly in English; if you know of any other films I should see from other parts of the world please let me know!

Starting off the list is this Italian labour classic that won 5 Oscars and began as a premier at the 35th Congress of the Italian Socialist Party.

Set in 19th century Turin, the film describes working conditions during the time where workers young and old would work in the early mornings until the late nights. After a workplace accident where a textile worker’s hand gets mangled, workers decide to demand that their 14 hour workday get shortened by one hour to avoid exhaustion (seems fair, right?). The management refuses and then a long struggle ensues making for a tense, dramatic and totally watchable film.

Another movie about textile workers, Norma Rae tells the story of the titular character as she becomes increasingly involved with the union movement because the poor health her family is in because of the factory they work in.

The famous scene where Norma Rae writes the sign “UNION” and stands on her worktable until all machines are silent is actually based on a real event during the life of union activist Crystal Lee Sutton, who the movie is based off of.

This 1987 film follows the events leading up to the “Battle of Matewan”, where detectives from the Baldwin-Felts detective agency (who were trying to evict miners) engaged in a firefight with local miners.

The film is set in 1920 (when the events took place) and tells the story of how in a response to the attempt to organize into unions, the Stone Mountain Coal Company tried to cut miners’ pays and replaced them with African American workers. These African Americans first labelled as scabs would eventually come together to fight alongside the labour unions.

Below is a clip from one of the most well-known scenes from the film that delivers this wonderful quote, enjoy!

“You ain’t men to that coal company, you’re equipment!”

Based on a true story, “Pride” depicts a group of gay and lesbian activists who raised money to help those affected by the British miner’s strike of 1984. An alliance that eventually form the “Lesbians and Gays Support the Miners” campaign.

Below is a clip I’ve included in a previous blog post about music from the labour movement. It’s a nice little clip of a rendition of the classic labour hymn, “Bread and Roses” from the film.

The only silent film on this list, Strike was directed by renowned Soviet director Sergei Eisenstein, director of the Soviet classic,The Battleship Potemkin.

The film starts out with (quite predictably) a powerful quote from Vladmir Lenin as backdrop: “The strength of the working class is organization. Without organization of the masses, the proletarian is nothing. Organized it is everything. Being organized means unity action, unity of practical activity.”

The film revolves around a factory strike in 1903 in pre-revolutionary Russia and their suppression by the owners of the factory.

The clip below is probably the film’s most famous. Throughout the movie uses animals as metaphors but none are as powerful as this scene. Attempting to show the suppression of the strike and subsequent slaughter of the workers, footage of cows being slaughtered are cross-cut over it (WARNING: this scene is not for the faint of heart):

Starring Sean Connery and Richard Harris, this 1970 film tells the story of the true story of the Molly Maguires, a secret society of Irish miners in Pennsylvania that was set up to fight their oppressive bosses. It was a box office failure but still has a place in this socialist blogger’s heart.

This 1971 biopic is about famous labour activist and songwriter Joe Hill who was originally born in Sweden. The movie follows Hill from his travels as a poor immigrant in New York to his involvement with the Industrical workers of the worlds to his subsequent execution where he was convicted for murder. The film went commercially unavailable for years but was brought back for our viewing pleasure by the National Library of Sweden this year!