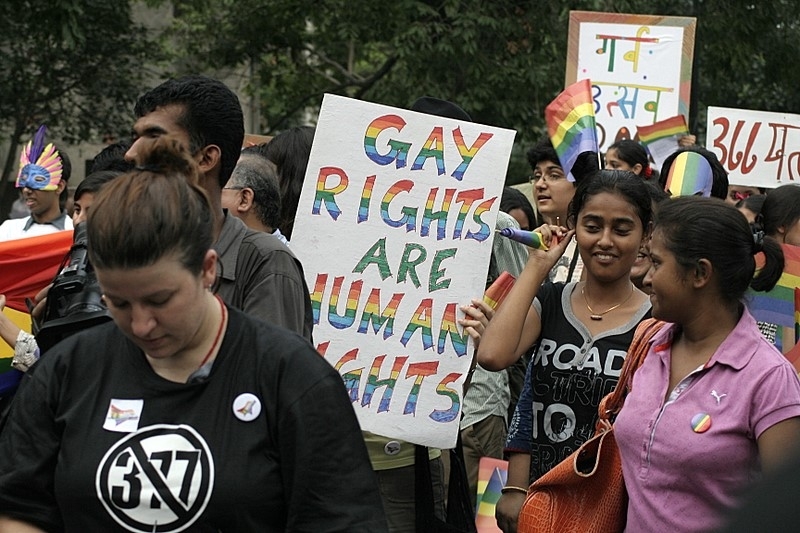 While the fight for legalization of same-sex marriage continues in most of the United States and other nations, this progress towards an acceptance of Lesbian, Gay, Bisexual, Transgender (LBGT) rights is at a standstill in other places. Many African countries, such as Sudan, Nigeria, and Angola, have laws prosecuting homosexuals with extreme punishments of imprisonment, and even the death penalty. These countries are not the only ones where the law and society reject deviations from heterosexuality, perceiving same-sex relations as “abnormal”. India, too, does not seem to be making much progress in terms of gay rights. Moreover, the past few years have witnessed a fundamental backtracking in the legalizations of consensual gay sex.

Section 377 of the Indian Penal Code, dating back to 1861, states that homosexual acts are unnatural and must be prohibited. In 2009, the High Court of India declared Section 377 unconstitutional and a violation of basic human rights. This was a cause for celebration for the population of homosexual men and women in India, as well as gay rights activist groups. This celebration was short-lived, however, as in 2013 the Supreme Court overturned the 2009 ruling. The reasons given included that an amendment or repeal of Section 377 should be decided by Parliament. The Supreme Court sided with the opinions of a wide majority of Indians (mostly conservative religious and political groups), making homosexuality illegal again, on the basis of “public morality and Indian cultural values”. Consequently, the gay population of a so-called secular India faced renewed fears of condemnation, running the risk of up to ten years of prison if caught engaging in consensual same-sex activity.

In India, the law is not alone in putting homosexuals at a disadvantage. Perhaps a change in the law must stem from real change in the way of thinking. Despite celebrations after the 2009 ruling, a seemingly widespread social stigma against gay sexual relations still exists within Indian society. Homosexuality is perceived as a mental deficiency rather than a natural preference, and coming out to friends and family will, in many cases, lead to social isolation.

This sort of public rejection was seen in the case of Manvendra Singh Gohil, a past prince who, as the first person of royalty to come out, was disowned by his family and shunned by a majority of the population. As a representative of a socially marginalized group, Gohil made it his mission to advocate for basic human rights and sexual health for the gay community. The NGO he started, the Lakshya trust, represented a commitment to fighting the spread of HIV/AIDS, an issue that was being increasingly neglected as gay sex was made a taboo subject following the reintroduction of an anti-gay law. Aside from the Lakshya trust, the disowned prince initiated various other projects to support the gay community. One of these is the establishment of a pink cottage, a house designated to provide a safe haven for gay men, where they could spend time comfortably, away from social criticism and legal punishment.

The most recent anti-homosexual incident in India has caught a large amount of attention from the public. Ramesh Tawadkar, an Indian minister in the state of Goa, announced controversial plans for the treatment and medication of homosexuals, with the ultimate goal of “[making] them normal”. With groups of the form of “Alcoholics Anonymous”, he claimed that he would be providing a safe space for gays to be treated medically, portraying them as “patients” of a particular mental or medical disorder.

Ban Ki-Moon, the Secretary-General at the United Nations, publicly condemned the antiquated views reflected in the laws regarding homosexuality. He denounced these perspectives, shared by many conservative Indians, and the laws they had led to, saying these were responsible for breeding harsh intolerance. Offering his speech in New Delhi, he captured the attention of the many activists that had taken renewed interest after the above-mentioned Tawadkar incident.  His views called for revoking of the ban on consensual same-sex relationships, advocating for universal equality in the process: “I staunchly oppose the criminalization of homosexuality … I am proud to stand for the equality of all people — including those who are lesbian, gay, bisexual and transgender”. He also made sure to remind the government of the reasoning behind the 2009 ruling, which had made the 1861 law unconstitutional: “I speak out because laws criminalizing consensual, adult same-sex relationships violate basic rights to privacy and to freedom from discrimination”.

With a public order given by the Secretary-General of one of the largest multinational organizations worldwide, it is likely that the laws regarding homosexual relations will be reviewed by the Indian government in the next few months. The 7th annual gay pride parade, which took place in New Delhi in the fall of 2014, symbolizes significant attempts at change, but this change is yet to be seen in the legal and political world. Despite the enormous economic advancements that India has made in the past decades, bringing it closer to the status of a developed country, this progress has not been paralleled in the social sphere.