NATO, Gaddafi, and the Arab Spring 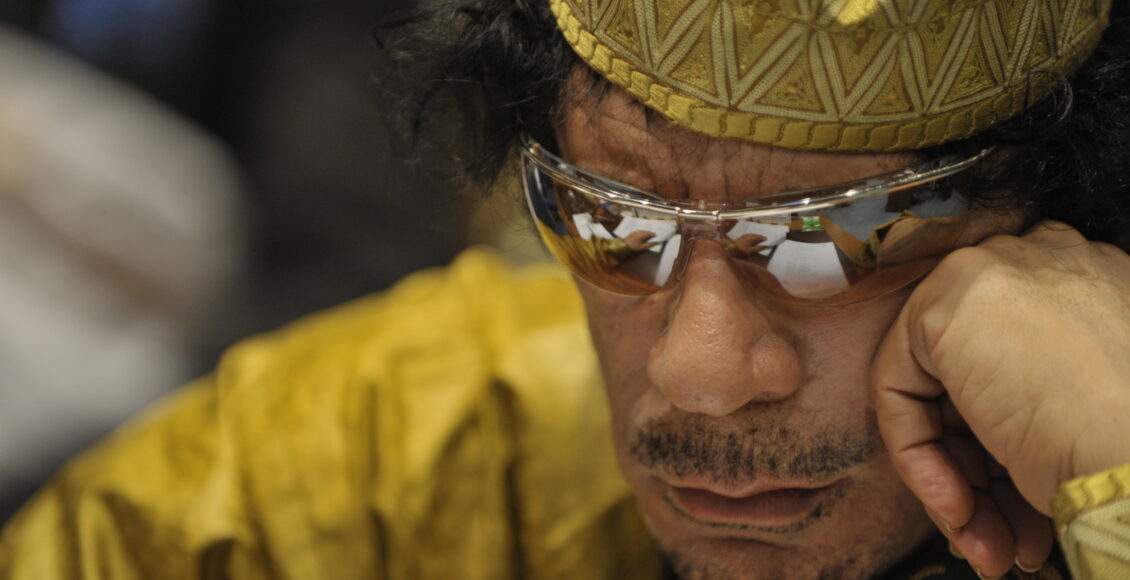 During the Arab Spring in 2011, protests erupted in Libya as people demanded dictator Muammar Gaddafi’s removal. When he came to power in 1969, Ghaddafi was a charismatic yet eccentric and unpredictable leader who controlled Libya for 42 years. The West viewed his death in October 2011 as another “victory” for democracy in the Arab Spring, alongside the removal of Hosni Mubarak in Egypt. In reality, Gaddafi’s death was largely a result of foreign intervention rather than an indigenous uprising. NATO and its regional allies had a strong interest in Gaddafi’s removal, leading to a highly effective military campaign to end his regime.

On February 15, 2011, protests against repression and food shortages began in Benghazi. Two days later, Libya had its “day of rage;” a wave of protests erupted in cities around the country. Gaddafi responded by instructing the military to attack protestors. The protests continued, escalating into a full-scale insurgency, now known as the First Libyan Civil War.

Though fighting against Gaddafi’s regime, the rebel groups were often extremely violent and unpredictable. According to Amnesty International, Libyan rebel groups were responsible for numerous human rights violations, including ethnic cleansing and the systematic kidnapping and murdering of dark-skinned Libyan residents they claimed were pro-Gaddafi mercenaries from West Africa. Many Libyans interviewed during the time said they preferred living under Gaddafi than under the constant threat of rebel groups, as Gaddafi’s regime was at least predictable.

As the Civil War escalated, Al-Jazeera was responsible for the majority of international reporting on the conflict. Al-Jazeera, owned in part by the Qatari government, portrayed the conflict to the international community in a way that vilified Gaddafi while letting violent rebel forces off the hook. They published several articles that pushed accusations against Gaddafi’s forces, corroborated by little to no evidence. It also reported that Gaddafi was using air power to attack protestors, a claim that both the US State Department and International Crisis Group later contradicted. Furthermore, Al-Jazeera reported that Gaddafi’s soldiers were given Viagra and ordered to systematically rape civilian and rebel women. An investigation by Amnesty International contradicted this claim, concluding they found insufficient evidence to support it.

On March 17, the UN authorized NATO and its regional allies in the Gulf Cooperation Council (GCC) to impose a no-fly zone over Libya. The resolution clearly stipulated that the operation should prioritize protecting civilian lives. It also authorized an arms embargo on belligerent forces and the freezing of all Libyan authority’s assets. The ensuing intervention campaign consisted of primarily French, American, British, and Qatari forces.

Despite the UN’s clear parameters regarding foreign intervention in Libya, it was clear that NATO and the GCC were more concerned with removing Gaddafi than with protecting civilian lives. The strikes carried out by the US, Britain, and France all seemed to disregard the directive of keeping civilians safe, as they carried out attacks that often intentionally harmed Gaddafi loyalists. Furthermore, Britain, Italy, France, Jordan, Qatar, and the UAE later admitted to sending special forces into the region, even though it was not allowed under the UN resolution. Qatari special forces, many of which received secret training from the French, later admitted to having led much of the rebellion, advising and planning key battles in the fight against Gaddafi. Despite NATO and GCC’s blatant disregard of the UN resolution, the international community still generally supported the intervention. They maintained that the intervention was a purely humanitarian mission, preventing any backlash or opposition from their own citizens.

After evading attack for many months, Gaddafi was eventually found in a drainpipe by a rebel group, captured, killed, and buried in the desert in October 2011.

The West was far keener to assist in the Libyan uprising than any other country during the Arab Spring. While the NATO intervention claimed a humanitarian purpose, NATO failed to intervene in other countries, such as Syria, where protests were also met with brutal crackdowns. To understand the West’s involvement in the 2011 Libyan civil war, it is necessary to look at Gaddafi’s relationship with foreign powers throughout his time in power.

After coming to power, Gaddafi was extremely unfriendly and distrustful of the West. The West wanted access to Libya’s vast oil reserves, but Gaddafi’s nationalist and protectionist stance made contracts unaccessible. As a result, Western powers were interested in removing the dictator from power. Throughout the1980s, the Reagan administration fabricated stories about Gaddafi to turn the American public and international actors against him, hoping to justify a coup or attack. Britain went so far as to cooperate and work with the Libyan Islamic Fighting Group (LIFG), a terrorist organization connected with Al-Qaeda, to weaken Gaddafi’s rule.

In the early 2000s, however, Gaddafi began to open Libyan oil markets to the West, striking deals with the US and various European Nations. As he thawed economic relations, the West’s relationship with Gaddafi shifted considerably. Gaddafi was seen in Paris and New York shaking hands with prime ministers and celebrities as he was given a warm welcome into their countries.  The West now considered Libya a key ally in protecting its interests in both the Middle East and Africa. Libya became a “priority market” for European arms producers. In 2009 alone, these producers sold an estimated $500 million USD of German, French, British, and Italian arms to Libya. A raid of the regime’s offices in 2011 uncovered a letter written in 2007 by Tony Blair—the Prime Minister of a country that had recently partnered with an Al-Qaeda cell to weaken Gaddafi — to Gaddafi himself, fondly signed “Best Wishes Yours Ever, Tony.” The same year, Gaddafi allegedly financed Nicholas Sarkozy’s presidential campaign, dumping €50 million EUR to assist his victory in France.

The cooperative relationship was short-lived, as Gaddafi’s regime began to turn its back on its deals with the West. After signing concessions with Libya, ExxonMobil and Total both entered into agreements with unfavourable terms, in which they were forced to front billions of dollars to Gaddafi’s regime. In 2009, Gaddafi threatened to renationalize Libyan oil while giving a video conference lecture at Georgetown University. The regime extorted Italy, threatening to send mass numbers of migrants across the Mediterranean if they did not agree to invest $5 billion USD in Libya. They made oil concessions and deals with NATO adversaries Russia and China. Finally, in early February 2011, weeks before the uprising, the regime announced it would officially divest from British and American deals.

As the Libyan Civil War began, the West saw an opportunity to remove an erratic leader and finally secure access to Libyan oil. In an attempt to re-assert French presence in Africa, as well as his own political position, Sarkozy was caught using planes meant for humanitarian aid to transport executives from large oil firms like Total to meet with rebel groups and make deals. Britain similarly admitted to forming a “Libyan Oil Cell” to strategize obtaining access to Libyan oil. Italy and Qatar also tried to secure favourable standing with Libya’s potential leaders, funding a Libyan interim government, the National Transition Committee (NTC).

The Arab Spring and following rebellion came at an opportune time for the West to dethrone Gaddafi, who, in addition to being an erratic, nationalist dictator, had now also betrayed the West and cost them millions of dollars. NATO, along with its regional allies, contributed to his removal using its military, political, and economic influence. NATO maintained that its intervention was purely humanitarian. In reality, NATO wanted to remove Gaddafi and finally access Libyan oil. Their mission was widely successful, as Gaddafi’s death is still seen as a “victory” of the Arab Spring rather than an example of illegal foreign intervention.