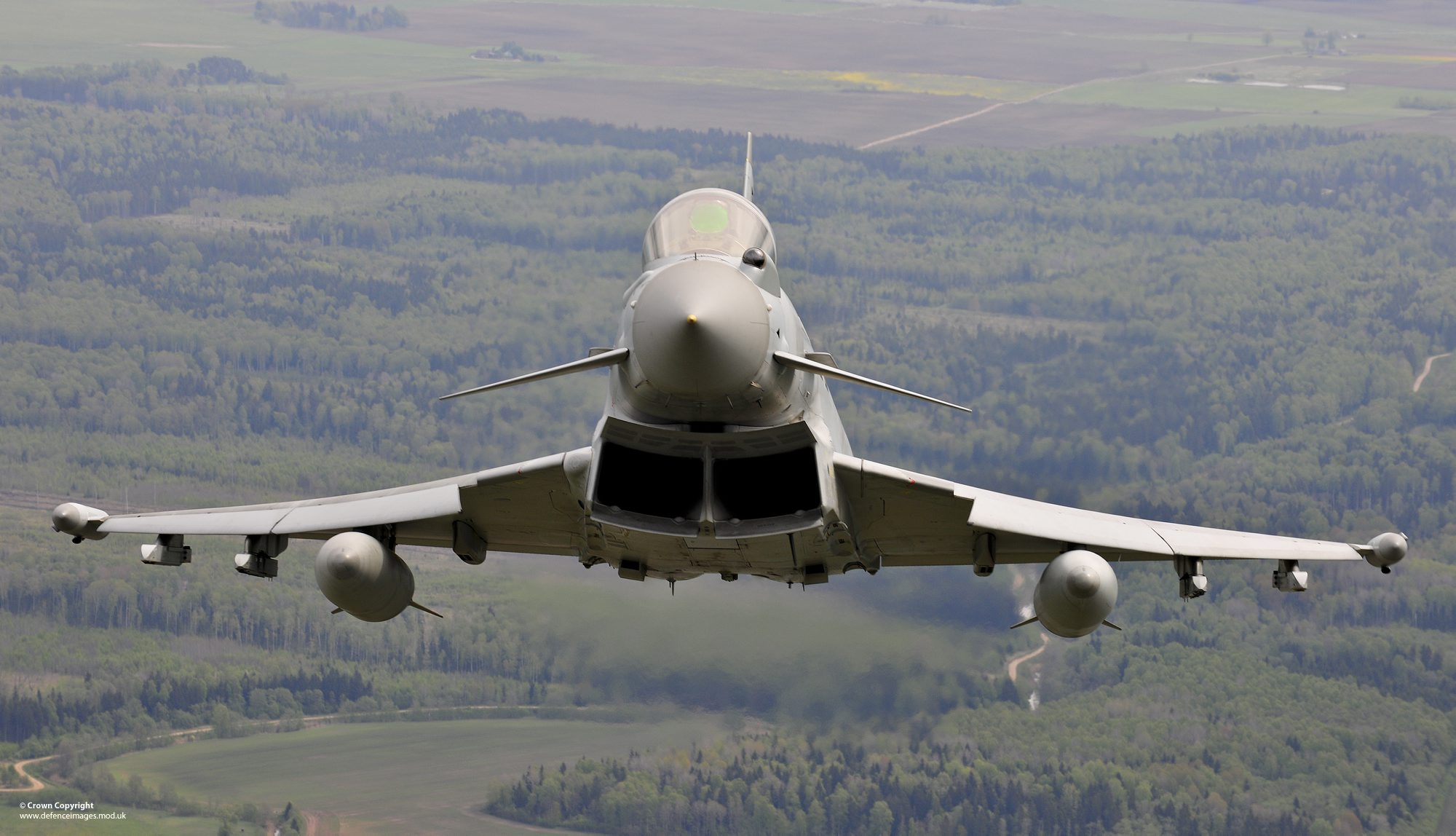 A British RAF aircraft over Lithuania, in the context of the NATO Baltic Air Policing (BAP) mission. NATO has increasingly engaged in Baltic security deployments since the 2014 Russian annexation of Crimea. https://flic.kr/p/nTnCME
Share

“Actions speak louder than words.” This is the rather mundane turn of phrase then-PM David Cameron used at the North Atlantic Treaty Organization (NATO) Warsaw summit in July 2016 to describe the 2017 Enhanced Forward Presence (EFP) deployment of 4,000 troops from 16 contributing states to Poland and the Baltic states. Underlying this common idiom is the assumption that an action conveys the same meaning to all parties involved, an assumption which clearly does not hold in the case of NATO’s military deployments in Russia’s near-abroad.  Once again, NATO’s deployment showcases the West’s failure to consider the policy-implications of divergent Eastern and Western approaches to security.  Whether this indifference is due to a genuine or feigned ignorance of Russian security demands matters less than the substantial consequences of this indifference for those in Putin’s backyard. As Mutually Assured Misperception escalates East-West tensions, diplomatic spaces should be reinvested for meaningful and constructive dialogue to be enabled: at the very least, East and West would know what they disagree about.

At the July 2016 Warsaw Summit, and in an effort to reaffirm signatory states’ commitment to collective security under Article 5 of the Treaty, NATO declared its intention to establish an Enhanced Forward Presence (EFP) in Eastern European member states. As one of the largest deployments to Eastern Europe since the end of the Cold War, the EFP plans to station 4,000 troops from 16 contributing states out of the 28 allies by the end of May 2017. The decision further specifies that four multinational battalion-size battlegroups will be organized in four Eastern member-states (Latvia, Lithuania, Estonia, and Poland), under the leadership of four Framework Nations (Canada, Germany, the United Kingdom, and the United States, respectively).

The objectives of the Presence are to strengthen NATO’s deterrence and defence posture in the Baltic region against a perceived Russian threat, as well as to foster cohesion and inter-operability of the Alliance’s multinational troops. In Warsaw, the EFP was designed as an unambiguous demonstration of “Allies’ solidarity, determination, and ability to act by triggering an immediate Allied response to any aggression”. British Defence Secretary Sir Michael Fallon explicitly referred to an “increasingly assertive Russia” as the reason behind NATO’s forceful demonstration of collective defence.

Since the beginning of 2017, British, Danish, French and German troops have started setting up the Presence in Poland and the Baltic states. On 18 March 2017, 120 British troops and 300 vehicles arrived in Estonia, and were joined on 21 March 2017 by 50 French troops and technical equipment. In total, 800 British troops and 300 French troops will constitute the backbone of the Estonian battlegroup. The vehicles and military technology include Challenger 2 tanks, infantry-fighting vehicles, self-propelled artillery pieces, drones, RAF jets, tanks, as well as high-precision long-range missiles, known as Guided Multiple Launch Rocket Systems.

The EFP stands in clear continuity with NATO’s efforts to make a show of military might. In June 2016, NATO’s Anakonda-16 concentrated 30,000 multinational troops as well as vehicles, aircrafts, and ships in a large-scale 10-day-long military training exercise on Polish territory. The exercise was largely carried out to reassure east European allies against the backdrop of ongoing violence in Ukraine’s Donbass region. The operations inevitably added to tensions in the region: in October 2016, Russia deployed nuclear-capable Iskander missiles to its Kaliningrad naval base – a Russian exclave between the states of Lithuania and Poland, Kaliningrad’s position on the Baltic Sea is of paramount geopolitical significance. In spite of the obvious red flags, more than 100 Belgian troops were deployed in January 2017 to Klaipeda in order to establish the EFP – Klaipeda is a Lithuanian town no more than 60 kilometers away from the Kaliningrad exclave.

The EFP has stirred debate and controversy both within NATO and contributing states. Many have contested the decision reached at the Warsaw Summit, and recommended caution as the West is clearly infringing in Russia’s backyard. German ex-Foreign Minister and incumbent President Frank-Walter Steinmeier has repeatedly and vocally warned against NATO’s “warmongering” and “sabre-rattling.” In fact, he believes NATO’s manoeuvres will prove counter-productive to regional security, increasing the risk of escalating tensions with Russia: “Whoever believes that a symbolic tank parade on the alliance’s eastern border will bring security is mistaken.” Emphasizing the importance of NATO’s ‘second pillar,’ he further declared that ambitions to deter Russia from the Baltic region would be fatally unsuccessful if diplomacy and dialogue are disregarded while the Alliance’s military muscle is flexed so explicitly. Dialogue and cooperation will prevent the situation inflames further. Steinmeier was notoriously rejoined by UK Labour leader Jeremy Corbyn as the latter expressed concerns about “the escalations of tensions” and the “return to a cold war mentality” linked to the deployments. For Corbyn, de-escalation can only occur if de-militarization is undertaken on both sides of the borders.

As a response to such declarations, NATO spokesperson Oana Lungescu reaffirmed that deployments were inherently “defensive, proportionate, and in line with [NATO’s] international commitments,” and referred to the NATO-Russia Council as a space for dialogue and diplomacy. There was no mention of the suspension of cooperation in the Council, effective since the Kremlin’s 2014 annexation of Crimea. Nor was there any consideration for Russia’s continued declarations making clear that the presence of NATO troops in its near-abroad is categorically interpreted as threats to its national security.

Divergent conceptions of security are at the root of the East-West misunderstanding, security dilemma, and escalation of tensions. In a telling example, Norwegian Joint Headquarters Commander Lt. Gen. Rune Jakobsen has recently developed Norwegian airborne capacity based on the assumption that “if we leave a vacuum, [the Russians] will fill it.” In contrast, Russia has repeatedly made clear that its notion of national security encompassed the creation and maintenance of vacuums, or ‘buffer zones’ between East and West. Russian re-imperialization policies also speak to the Kremlin’s strong resolve to ‘protect’ its near-abroad from integration into the West’s sphere of influence. Ultimately, Russia’s increasingly inflated understanding of ‘security’ will not long coexist alongside blatant demonstrations of force in its backyard such as the one being currently deployed under the EFP. The question that remains to be addressed is whether Mutually Assured Misperception will take the world back to Mutually Assured Destruction. In any case, as long as neither NATO countries nor Russia make an effort to create and sustain constructive dialogue, it seems the Baltics are set on an increasingly rocky and disquieting path.

In addition, US President Trump’s incessant tweets on and blatant ignorance of NATO have only further spiked general dread and anxiety among northern and eastern European states, who feel more threatened than ever since the end of the Cold War. In turn, the generalized state of anxiety further reproduces and reinforces perceptions of Russian threats and aggressions: increasingly, we see Cold War discursive element reappearing in official declarations. For example, UK Armed Forces Minister Mike Penning insisted that “Russian aggression” justified the Alliance’s deployment of military might in the EFP. As can be expected, misperceptions and rising tensions will only continue to reinforce one another in a vicious cycle. Mutually Assured Misperception seems inevitable under such conditions, and its implications will weigh most heavily on Polish, Estonian, Latvian, and Lithuanian citizens, as increasingly tougher stances are taken on both sides of the borders.

What it all Means

Actions do not always speak louder than words; in fact, they can very much work against one’s best interest if they are misunderstood by other parties involved. Intentions are much easier to get across through words when actions convey different meanings to the parties involved. A military deployment can be interpreted in widely different ways, depending on one’s understanding of ‘national security’. By contrast, diplomacy provides space for interpretations and meanings to converge through dialogue. NATO’s disproportionate emphasis on the demonstration of military might in the Baltics and in Poland can only lead to further misperceptions and escalation as it comes into clash with Russia’s imperial ambitions and enlarged notions of ‘national security’; reinvesting diplomatic spaces for dialogue will be crucial to minimize the security implications of these fundamental misperceptions.