Navigating the Trump Administration: The Show-Womanship of Nikki Haley 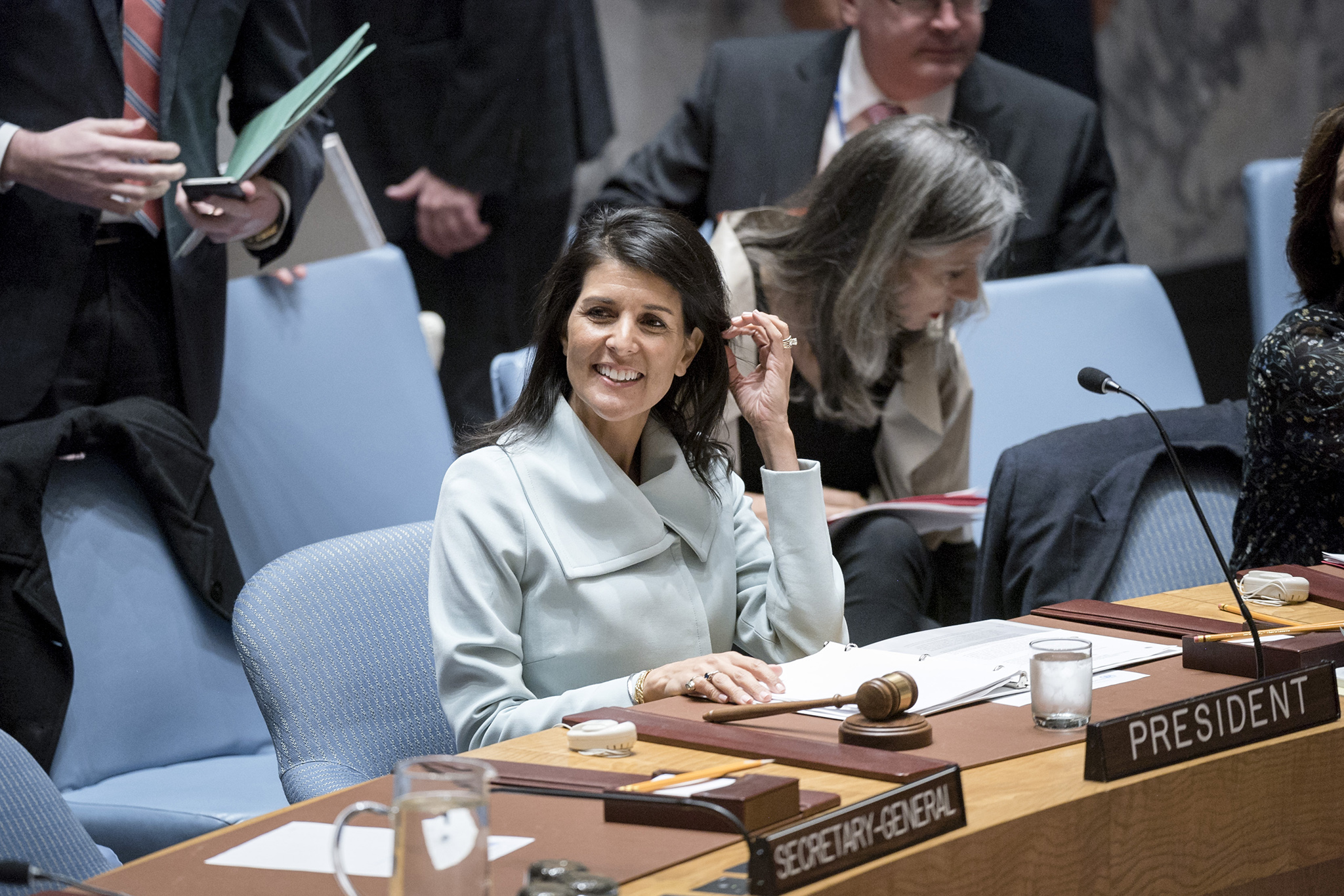 Once a vocal critic of Donald Trump and his bid for presidency, UN Ambassador Nikki Haley has since emerged as a pivotal member of President Trump’s foreign policy cadre. The first female governor of South Carolina and daughter of Indian-immigrant parents, Haley’s role in the new administration is somewhat of an enigma. In addition to her status as one of very few women of colour in the new administration, she consistently diverges from President Trump’s foreign policy positions. For example, she has maintained a much more hawkish position towards Russia over conflicts in Syria and Ukraine. Despite the obvious dichotomy between the two, the administration has not taken significant measures to reign in her actions and statements, raising the question of why she has been able to operate with such independence. Her nonalignment is significant given that many close to the administration, including Steve Bannon and other National Security Council staff, have been removed for disagreeing with the President.

There are three explanations that may shed light on her conduct. First, it is possible that Trump has assented to, or at least not flatly opposed, Haley’s divergence from the official line because projecting a “traditional” conservative agenda on the international stage is helpful to the administration. Haley is able to soothe traditional American allies and Trump skeptics abroad. Second, the continued incongruence between Trump and Haley is a result of general administration dysfunction, with the UN office taking advantage of empty positions in the State Department to shape policy outcomes. Lastly, Haley has demonstrated her ability to thrive in the limelight. Unlike her domestic counterpart Secretary of State Rex Tillerson, Haley has not shied away from the media. As an avid consumer of televised news and a larger than life media presence himself, President Trump may appreciate Haley as a political personality and see this similarity as a way to bridge their differences. Her success thus far highlights the importance of political show-womanship in navigating the new administration.

Nikki Haley’s career began in earnest when she broke into the “good ol’ boys” club of South Carolina politics, beating a long-time Republican senator for the governor’s seat in 2011. In an article written after her election, the Atlantic argued that Haley’s political platform hailed a more inclusive and alternative variant of GOP politics, emphasizing whistle-blowing and anti-corruption, while remaining true to the tenets of market-oriented and small government conservatism. She is many of the things that establishment republicans would have hoped to channel in 2016 if Donald Trump had not emerged to dominate the election. Paul Ryan, among others, has made glowing comments about Haley and her future in the Republican party.

As UN Ambassador, Haley has adopted traditional conservative foreign policy talking points when it comes to conflicts in Syria and Ukraine, support of long-time U.S. ally Israel and commitment to the NATO alliance. Politico reporter Eliana Johnson writes, “Haley’s tenure is otherwise noteworthy for how utterly quotidian her pronouncements would be in the course of any other Republican administration. She has made a point of reassuring traditional American allies like Britain and France… and of putting the nation’s adversaries on warning.” Towing the traditional line, Haley has remained committed to upholding human rights by condemning authoritarian regimes abroad, despite Trump’s willingness to work with figures such as President el-Sisi of Egypt, who has come under harsh criticism of human rights groups.

At the UN, Haley’s foreign policy position and pragmatism in diplomacy have helped mitigate the fact that President Trump is nominally against almost all multilateralism. She has proven to be a competent and flexible negotiator, such as in her efforts to scale back U.S. financial support for United Nation peacekeeping operations. The episode underscored Haley’s ability to compromise and the willingness of other foreign diplomats to work with her. This is an asset given that traditional global partners are wary of what the Trump administration portends. She has excelled at striking a balance, simultaneously offering criticism of the United Nations while still supporting international cooperation. This is particular significant given that she is almost entirely without previous foreign policy experience. Although the two are often out of sync, Haley is helpful for the Trump administration. The “normalness” of her conduct at the UN has helped her achieve the administration’s goals, such as spending cuts to expensive UN projects, albeit at a slower pace than the White House would like.

The personnel vacuum left at the State Department has also contributed to Haley’s independence. Dysfunction within the administration continues as over 50 percent of State Department jobs listed on the agency’s leadership chart are vacant or filled by temporary employees. The UN office exercises greater power than usual by taking advantage of this situation. While the UN Ambassador is subordinate to the State Department, the Washington Post reports that Haley’s staff often sidesteps the department when it comes to policy issues. Responding to the Department’s weak bureaucratic capabilities, policies covering a wide range of foreign policy issues are crafted by Haley’s office in New York and then cleared by the White House. State Department officials recently responded with an email to Haley’s office, urging the United Nations Ambassador to clear her statements with Washington and stick to the foreign policy “building blocks” set out by the agency.

The last piece of the Haley puzzle is possibly the role of her political personality. Like President Trump, the UN Ambassador has a flare for theatrics. Journalist Dan McAdams notes that “Trump seems supremely cognizant of the fact that he is always acting. He moves through life like a man who knows he is always being observed.” In choosing members of his administration, President Trump appreciates the value of a media personality – think of Kellyanne Conway’s television presence during his campaign and early administration; Haley draws some similarities. In the past three months Haley has taken on an unprecedented public role for a UN Ambassador, making frequent media appearances and generating buzz with her snappy one-liners. “I wear heels, and it’s not for a fashion statement. It’s because if we see something wrong, we are going to kick em’ every single time,” she said at a recent conference for the American Israel Public Affairs Committee. She promised early on that she and her staff would be “taking names” of those “who don’t have [America’s] back” at the United Nations.

The recent chemical weapons attack in Syria highlighted Haley’s pivotal public presence compared to that of Secretary of State Rex Tillerson. Tillerson has described himself as “not a big media press access person” and has consented to very few interviews since assuming his position. After the Assad regime in Syria used chemical weapons to carry out a strike that killed dozens of civilians in early April, Haley departed sharply from President Trump’s stance, stating that regime change in Syria is a top priority for the United States. Haley displayed photos of Syrian children that had been injured or killed during the attack in an emotive and highly publicized speech at the UN. Haley seemed to be ahead of the curve when President Trump, surprising most, ordered a targeted strike against an airfield in Syria in response to the chemical attacks. Mixed messaging continued when Tillerson appeared to directly contradict Haley, stating that the administrations policy towards Syria had not changed. Recognizing her clout with mainstream Republicans and the efficacy of her public appearances, perhaps President Trump is hesitant to curb her independence, even if it prompts him to stray from his articulated position.

The episode speaks to the importance of cultivating a media presence in order to remain influential in the new administration. Chris Cilizza for CNN comments “what we learned in the campaign is that Trump aides…would purposely go on TV if they wanted to make sure Trump got a particular message. They knew – and know—how much cable TV he watches and quickly grasped that the best way to reach him oftentimes was to go on TV.” Cilizza points out that the episode with Syria then speaks to Haley’s ability to leverage her public presence in a way that can have real foreign policy implications. Personality politics have come to define the Trump presidency, and in the case of Nikki Haley, it is possible they matter more than differences in policy.

While President Trump may appreciate Haley’s boldness and ability to thrive in the limelight, she runs the risk of overstepping boundaries. The personal relationship between the Haley and President Trump is hard to read. Haley has continued to rise in the administration, recently being added to the National Security Council, yet Trump took a swipe at her during a recent UN Security Council meeting. After asking if everyone liked her and thought she was doing a good job, Trump reminded them that “otherwise she could be replaced. Right?” He quickly added, “No we won’t do that. I promise. She’s doing a fantastic job.” However, with FBI director James Comey fired on Tuesday for his alleged misconduct during the investigation into Hillary Clinton’s email, it is clear the White House is willing to reshuffle senior officials as it sees fit. Nikki Haley has played her cards well, but she is not immune to the volatility of the administration and her independence may be challenged in time.