The Never-Ending Fight to Save Chicago Schools 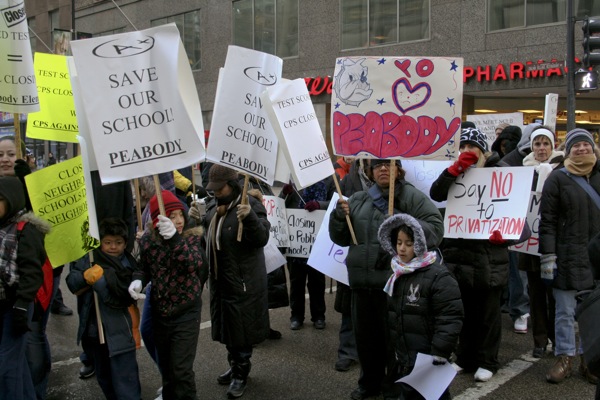 The City of Chicago, led by Rahm Emmanuel, shut down 50 Chicago Public Schools (CPS) in 2013. In the five years since the massive shuttering of elementary and high schools, there has been a moratorium on school closings in Chicago. However, the new year brings new threats to schools – the moratorium is up in 2018.

At the end of last year, CPS announced new plans for closings and consolidations in 2018. Although there are fewer proposed terminations than in 2013, there would still be an extensive displacement of thousands of students. The biggest closings would be of four under-enrolled high schools on the South Side of the city. Harper, Hope, Robeson, and TEAM Englewood high schools, which are all in the Englewood neighbourhood, would be shuttered and the student bodies would consolidate into a new $85 million high school campus that CPS says would open in 2019. The students currently attending the high schools would have to attend different schools for the interim year before the new campus opens.

There have been a wide array of responses to this proposal. CPS CEO, Janice Jackson, is in favour of the plan because currently “kids are only offered the basic minimum,” but by pooling the resources of the schools she believes they can have a more valuable high school experience. Additionally, the four schools are each under-enrolled presently, so CPS thinks general efficiency in the schools could be improved by consolidating. It is not clear where all the funds for this new campus would come from, but presumably some would come from the consolidation and closing of the four high schools.

The Chicago Teacher’s Union (CTU) stands against the proposal and believes the neighbourhood and its students would be better served by investing the money into improving the four current high schools. This could include physically innovating facilities, buying new supplies and books, and expanding after school programs. The CTU filed a grievance with Janice Jackson on the matter.

Most importantly, students from the four high schools have been relentlessly protesting the closure and consolidation plan for many months. They held a sit-in and protest at the December 2017 CPS board meeting and passionately made pleas for their schools. (You can see live tweets, pictures, and videos from the protest here.) Many students have expressed concern over the interim year, having to travel far to go to school and splitting up from their friends and teachers for a year. Both CTU and student protestors have highlighted the fact that these school closings disproportionately affect Black and Latinx students, forcing them to go to further effort to get their education every day. This was also true of the 2013 school closings, which were majorly on the South and West sides and mostly affected Black and Latinx students and families.

The CPS board does not vote on the school closings until next month. Hopefully, come February the board will honour the students’ voices and allocate the money to the existing high schools and not force them to relocate.