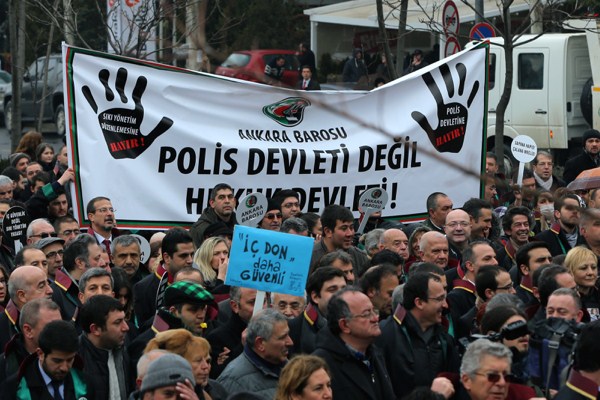 Thousands of members of Turkey’s Bar Associations march to the Parliament with a banner that reads “The state of law, not state of police!” in Ankara, Turkey, Feb. 16, 2015 (AP photo by Burhan Ozbilici).
Share

It is rare to witness politicians, who are usually collected and eloquent, to fistfight one another over political matters. Nonetheless, the heated debate about the homeland security bill proposal, also known as the “Legal Package To Protect Freedoms”, in Turkey has the capacity to turn the parliament into primitive chaos. The Justice and Development Party (AKP), the current pro-Erdoğan ruling party in Turkey, views the new security bill as a retrospection of the Kurdish riots that happened last October 2014. As the new proposal surfaces, the articles about extending police power and expanding domestic securities raise eyebrows. The AKP justified that the bill serves as a precaution for future domestic riots; the opposing legislators argued the bill imposes political threat to society. Appeal to moderate of the proposal was also rejected by the current Turkish president, Recep Tayyip Erdoğan. Considering past records of the Turkish government suppression, concerns were raised on the potential risk brought by the bill for turning Turkey into police state.

The worries of the gradual change in Turkey are not far-fetched. The proposed bill does entrust enormous amount of power to the police force in numerous ways, which any slight mishandling can easily evoke problems. The bill unleashes the power to police officers to arrest, detain individuals for 48 hours and to perform strip or car search, all without prior court approval. Under the current Turkish law, police can “only capture but not detain” and they do not have the power to search you or your car without a warrant. It is arguably reasonable for police not to have superiors’ authorization for car or strip search if it is done under strict disciplinary procedures. Nevertheless, the authority for police to capture and detain people according to their “criminal suspicion” instinct provides opportunities of exploitation. Not only does the bill give opportunities for police to seize their power without proper and careful judgment, there are no solid disciplinary guidelines for the police to follow. Intuition of a suspicious person can be entirely subjective. For what guidelines are the police going to follow for detaining people? For what reasons and under what circumstances will the police need exercise this power? Providing unsupervised powers to police is particularly vulnerable to political exploitation, especially under Erdoğan’s rule when journalists and even teenagers who criticized him have been either jailed or testify for “insulting him”. Police are tools for the governing party to purge dissidents not in favour of the regime. 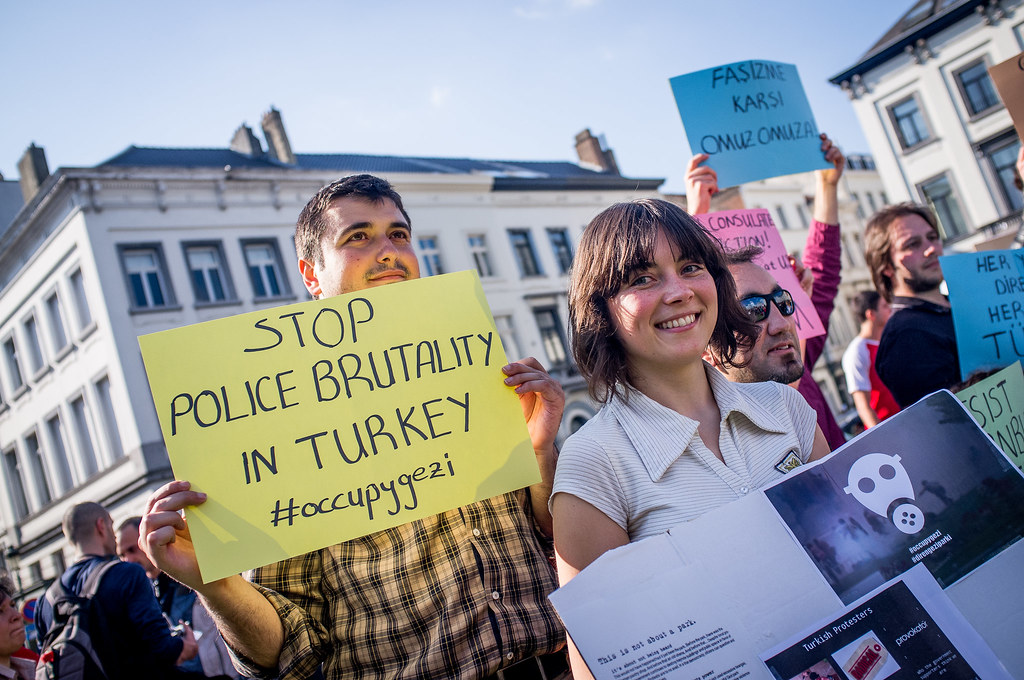 The police are also empowered to capture people who hide their face in a protest. What does this has to do with the bill’s goal to prevent chaos during demonstrations? One can only speculate that this article functions for psychological purposes. Not being anonymous discourages protestors to do things that are extreme without being noticed. They are more conscious of being recognized. Though the argument itself stands, it seems weak and inadequate to justify police arresting those who intentionally hide their faces. In fact, this article is merely unnecessary if the reason to propose this article was purely psychologically driven. There could just be an amendment to describe what is categorized as dangerous acts during protests, a guideline to peaceful rally, and only those people who intentionally stir up violence can the police arrest them. Therefore, the real intention for APK to put forward this article is questionable. What is the purpose to force people showing their bare faces when participating in protest? If it is psychological, is this an article to cast fear upon those who are daring to criticize?

Furthermore, the bill implements 48 hours wire tapping without judiciary allowance. Without court authorization implies a lack of supervision displaying the policy’s major weakness. Whoever in charge of eavesdropping no longer needs to conduct thorough investigate and collect strong evidence to defend the act of wire-tapping. There are no superiors monitoring the appropriateness and duration of wiretapping. Who knows if the wiretapping has been 18 hours or 48 hours when no one is supervising the surveillance? The concept “to act first before approval” is getting repetitive throughout the bill. It seems to as if there is a hidden political agenda for proposing surveillance faulty jurisdiction supervision. With the history of purging unwanted criticism under Erdoğan’s rule, perhaps the article has a psychological target – casting fear as a source of indirect censorship. In fear of being wire-tapped, people are more conscious of their everyday conversation over political matters for instance openly criticizing Erdoğan that may eventually end up with an arrest or interrogation. More importantly, Turkey, with the rank of 154th in World Press Freedom Index, is one of the “biggest media prison for journalists, especially those who express views critical of the authorities on the Kurdish issue”. One wonders if the press is the actual main target of the wiretapping article – to indirectly censor the media with psychological pressure – reminiscent of the police state of 1984.

Some may have the desire to argue psychological censorship through wiretapping is a wild guess, and yet censorship is undeniable part of the new bill’s goal considering that one of the article is allowing immediate Internet blockage. It limits the access of information on the Internet. The bill states the Telecommunication Directorate (TIB) have the authority to decree blocking of a website if classified “illegal” by the government, again, without judiciary authorization. Social media websites – a usual platform for criticizing current ruling party – can easily be labeled as “illegal” by the Turkish government. What is mean by “illegal” is entirely in the government’s full manipulation, evidently shown in the Twitter ban in 2014 that is eventually lifted two weeks after the constitutional court ruling for the violation of freedom to expression. Needless to say the block and the incidents happened a year prior the proposal of the new bill, passing this arbitrarily written article is very risky for a government so intolerable to criticism. Not only is it breaching freedom to express, it is endangering the public’s access to information. If this article did pass, only the government’s approved information will be available to the Turkish population. This article is proposed with political motives.

On a brighter note, the Turkish public still holds power in their vote for the next election. Nonetheless, it is difficult to say if Turkey will drastically proceed in developing police state characteristics of tightening free press and intensifying censorship under the new proposed security bill. Ironically, the “Legal Package To Protect Freedoms” does not seem to provide protection to freedom but annihilation.