Northern Triangle Youth: Where Can They Go Now? 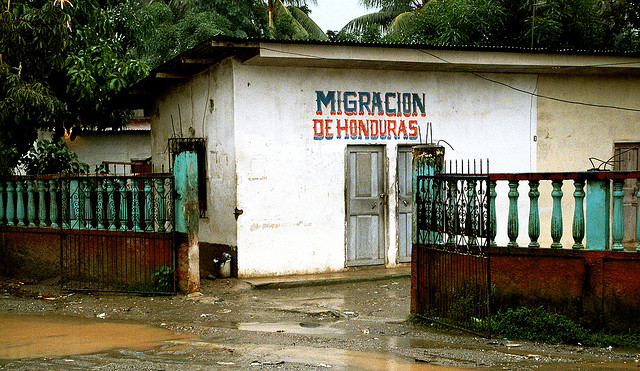 The past few years have seen an unmanageable increase in migration from Central America, especially the Northern Triangle, into the U.S. through the southern Mexican border[1]. The Northern Triangle consists of the “triangle” countries, namely Honduras, El Salvador, and Guatemala. People in these three countries have had to adapt to a lifestyle of fear. They are facing increasing gang violence accompanied by an ascending number of murders, on top of the violence, poverty, and unemployment that were already existent there[2]. Young, parentless minors are being coerced into joining gangs, risking death if they refuse or attempt to separate themselves from these gangs[3]. The two largest gangs that have established themselves in the Northern Triangle are Barrio 18 and MS13[4]. Facing such risks, a majority of minors are making the long and dangerous trip to the Northern border, a trip along which they could just as easily be killed, but which they would prefer “to remaining at home.” [5] Their hopes are soon crushed when they realize they are not as welcome as they thought they would be at the American border. Contrary to what they had been told through various rumors of “preferential treatment to minors”[6], they are not allowed legal entrance into the country and are instead detained for an undetermined amount of time at the border[7].

The various gangs, mainly Barrio 18 and MS13, are the core problem of this displacement of minors. What are their origins? These gangs were first formed in the U.S., the very country that is now refusing to protect the ones affected by the repercussions of this extreme violence. During the period of civil wars in El Salvador and Nicaragua, many young immigrants moved to the U.S., particularly near the area of L.A[8]. There, they were greeted with much antagonism from pre-established gangs formed by the resident Mexican-American and African-American groups[9]. With the imperative of “fighting back,” the Central American groups retaliated by forming a gang of their own, which came to be known as Mara Salvatrucha[10]. It eventually split into two factions: MS-13 and MS18 (also known as 18th Street or Barrio 18)[11]. Following a change in immigration and deportation laws in the U.S. authorizing deportation of “’criminal aliens’” who have previously been convicted for a crime, many young immigrants who were part of these gangs were sent back below the Mexican border[12]. Not wanting to go back to their war-torn countries, they set up in Honduras, Guatemala and even El Salvador[13]. There, they reconstructed the world they had come to know in L.A. They completely took over neighborhoods in various cities while the police and government stood on the side, lacking both the will and the power to control them.[14]

This increased gang violence has had negative impacts both in the countries that are directly concerned and the U.S., the latter facing an increasing number of refuge-seekers. Many world reports have noted that Honduras is now home to the world’s murder capital, San Pedro Sula. According to the United Nations, it had the highest homicide rate in 2012, and a 2014 homicide rate of children under 17 that increased by 77 percent from the same time period in 2013[15]. Cities in El Salvador are also rank high in international murder rates. In addition to the momentum carried south from L.A., gang violence has gradually been expanding due to the Mexican drug cartels that are using Honduras as a base. Lacking strong drug laws and home to an organized gang system, this country represented a haven for the Mexican drug trafficking organizations, away from the stronghold of the War on Drugs in Mexico[16]. On top of its physical effects, gang violence also badly affects the psychological state of the citizens of the Northern Triangle countries. “I dream about being able to walk down the street without looking over my shoulder thinking someone is about to kill me,”[17] explains a young Honduran man.

As previously mentioned, the impact of gang violence is also felt in the U.S.: the Texas-Mexico border is overflowing with young unaccompanied minors[18], all looking for a future where killing or being killed is not constantly a possibility. An article written in July of this year states that about 57,000 migrants, mostly unaccompanied minors, have come to the U.S. border since January[19]. A shocking contributing factor to this problem is the stories that they are being told back home. In Honduras, there is a false idea that Barack Obama has put in place laws that allow for minors to enter the country without many barriers[20]. Unfortunately, for economic reasons, this is not the case. “In the United States, many officials see the drug problem as basically one of health, as how much it costs to treat an addict and stop them getting involved. But for us [Hondurans] it is life and death”[21] The Central American immigration crisis is somewhat amplified by the immigration and refugee policies of the Obama administration.

On October 1st, Obama’s new refugee plan was approved and put in place[22]. This directive, although revolutionary at first sight, simply allowed for unaccompanied minors to apply for legal refugee status through what the government calls “in-country processing[23].” With this new plan, minors who already have relatives holding legal refugee status in the U.S. (this part of the plan unfortunately excludes a vast majority of the minors attempting to cross the border) are able to apply for legal status from home before engaging on the dangerous travel route up to the border[24]. Although it appears that more immigrants will be granted legal status, the U.S. administration clearly states that, “the number of total visas granted to refugees would remain constant”[25]. This plan’s main aim is in fact the redistribution of refugee slots internationally. With an increasing demand from Syrian refugees, the U.S. had to cut back on allowed refugees from Central America, allotting more slots to Syria as well as a few more to the Caribbean and other Latin American countries[26]. Because of this issue, the U.S. has been urged to see Honduran and other Northern Triangle refugees as refugees of armed conflict[27] (represented here by gang violence). Organizations that advocate refugee rights also “proposed a processing system where asylum claims could be reviewed in Central America,” to allow for those qualified to obtain refuge away from their home nations[28].

With this recent change in U.S. policies regarding Central American immigration into the U.S., the situation will surely be under watch. Meanwhile, the youth of the Northern Triangle are doing their best to stay alive by compromising with the powerful forces of the L.A.-born gangs.