Oh No, O’Toole: A Crisis Looming for the Tories? 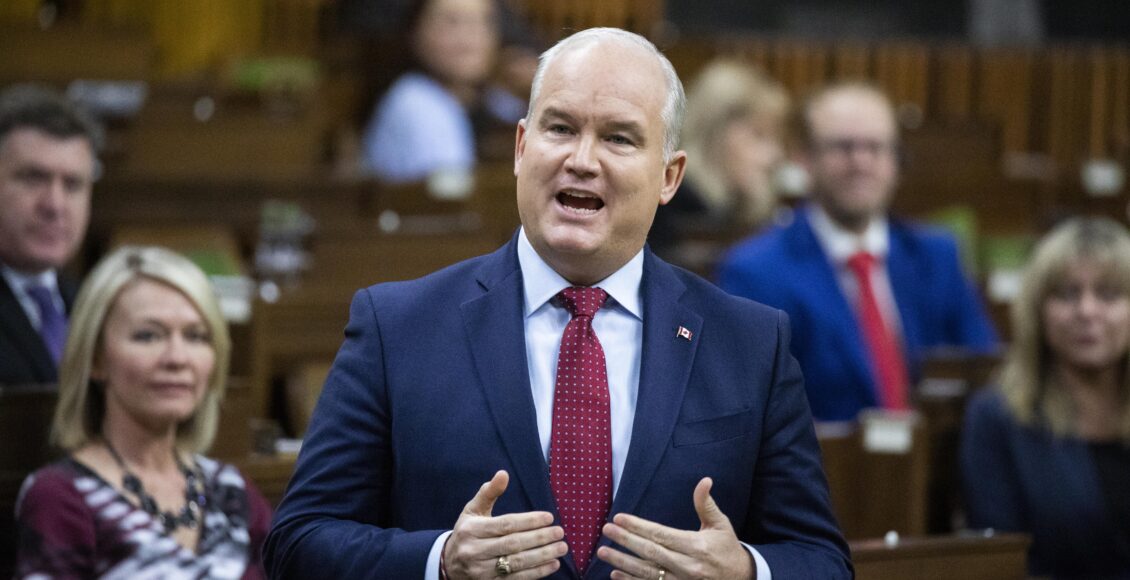 Tensions are high within the Conservative Party of Canada (CPC). After seven months of Erin O’Toole’s leadership, the Tories are in a troublesome state, with popular support below the 30 per cent mark. O’Toole is currently the most unpopular federal political party leader in Canada and there are reports that his unpopularity among the electorate is mirrored within the caucus. O’Toole’s inability to forge out a clear strategy, inept handling of various crises, and oscillation between populism and moderation could lead to the Conservatives tearing themselves apart once again.

The CPC was established in 2003, following the merger of the Canadian Alliance (CA) and the Progressive Conservatives (PCs). The current ideological rift within the CPC can be traced back to these two parties’ different interpretations of conservatism. The PCs were moderates, relatively supportive of liberal positions on social issues, with a base rooted in Eastern Canada, whereas the CA was socially conservative, uncompromising, and almost exclusively supported by Western Canada. Since its foundation, the CPC has been shaped by a constant state of compromise.

Electoral defeat in 2015 led to the departure of Stephen Harper as party leader. After two years of interim leadership by Rona Ambrose, the party eventually selected its new leader in 2017. Among a crowded field of candidates, Andrew Scheer emerged as a compromise candidate and narrowly won the leadership race. However, despite winning the popular vote, the CPC failed to oust Justin Trudeau’s Liberals in 2019. Amidst widespread calls for resignation, Scheer resigned from party leadership a few months later.

The 2020 leadership race pitted four candidates against each other: Peter MacKay, Leslyn Lewis, Derek Sloan, and Erin O’Toole. MacKay, having served as the PCs’ last leader and in high-profile cabinet posts under Harper, was the frontrunner. He believed that the CPC had “missed an open net” in 2019 and argued that lingering social conservatism within the party had been the main factor behind this defeat. In contrast, Lewis campaigned on social conservatism and Sloan appealed to the hard-right fringes, espousing conspiracy theories and accepting endorsements from the People’s Party of Canada.

While O’Toole had previously run on a centrist platform in 2017, MacKay’s position as the natural choice for moderates pushed him to switch gears in 2020. He labelled himself as the “true blue” candidate, adopted populist rhetoric with vague promises such as “combatting cancel culture,” and used “Take Back Canada” as his campaign slogan. While Peter MacKay ran a positive and more conventional campaign focused on the party’s future, O’Toole’s campaign was heavily targeted against MacKay himself.

In the end, O’Toole managed to defeat MacKay thanks to his second choice status for supporters of Lewis and Sloan, the latter of whom received support from O’Toole when he became embroiled in a racism scandal involving Chief Public Health Officer Theresa Tam. As a relatively unknown politician, O’Toole had a key advantage: a lack of preexisting baggage and the opportunity to shape public opinion in his favour. However, according to data from opinion polls, it appears that he has failed to seize this opportunity.

Having advertised himself as a true conservative despite being quite moderate, O’Toole found himself in a tricky position. Unable to develop a clear plan on handling the COVID-19 pandemic or the economy, he instead diverted time and effort towards issues such as the decline of the French language in Quebec. In an attempt to emulate the electoral victories of Donald Trump and Boris Johnson by securing the blue-collar vote, O’Toole partially abandoned the traditional economic policies of the CPC and turned towards a more populist narrative. Vague messages promoting labour unions and economic nationalism replaced free market and free trade policies.

During the COVID-19 pandemic, O’Toole and Pierre Poilievre, his presumptive pick for Finance Minister should the CPC form a government, were quick to criticize Trudeau’s spending, emphasizing the fact that the working class would bear the burden of increased deficit for the next decade. Their rhetoric took a conspiratorial turn when they began alluding to the “Great Reset,” a conspiracy theory perpetuating contradictory accusations of Liberals being socialist and of working for elites and financial corporations. At some point, Conservative MP John Brassard shouting “George Soros!” at Finance Minister Chrystia Freeland in the House of Commons.

Throughout the fall of 2020, O’Toole continued courting social conservatives. He allowed a free vote on banning conversion therapy, and remained silent in response to controversial remarks from a handful of MPs. In a move that further divided the party, O’Toole criticized Ontario Premier Doug Ford for his strict response to the COVID-19 pandemic, and praised Alberta’s Jason Kenney’s approach. Ford currently enjoys high approval ratings, while Kenney is facing a rebellion within his own party. O’Toole hit a new low in December with his defence of Egerton Ryerson and the residential school system. Andrew Scheer, in comparison, had expelled Senator Lynn Beyak from the party for similar remarks in 2018.

The US Capitol riots of January 6, 2021 forced a sudden shift in O’Toole’s rhetoric and positioning. He immediately released a declaration rejecting far-right presence within the CPC. Days later, he expelled Sloan from the caucus for accepting donations from a white supremacist during the leadership race. Given O’Toole’s prior support of Sloan, this move was perceived as hypocritical by some. He also reshuffled the shadow cabinet, notably stripping Pierre Poilievre of his role as finance critic. Poilievre was replaced by Ed Fast, a Harper-era cabinet minister with a much softer approach. While Fast immediately succeeded in passing a multi-partisan motion supporting the tourism and airline industries, the CPC’s right-wing saw Poilievre’s demotion as another betrayal by O’Toole.

As the CPC’s virtual convention begins, it is rumoured that many MPs are demoralized and unhappy, with analogies being made to the caucus revolt against Stockwell Day in 2001. Despite spending seven months as party leader, O’Toole’s strategy and policies remain unclear. Moderates are disillusioned with his divisive attitude and constant flip-flopping, whereas right-wingers feel betrayed by the recent developments involving Sloan and Poilievre. Social conservatives are as organized as ever after mobilizing online, and have managed to replace prominent moderate Tories such as Mark Mulroney and Stephen Lecce as convention delegates. In reference to his mobilized base, Sloan has stated that his “shadow will loom large” at the convention. Further exemplifying the party’s factional division, Peter MacKay has made it clear he will not attend the convention,

By dabbling in populism and social conservatism for short-term political gain, Erin O’Toole has opened Pandora’s box, and is now struggling with the forces unleashed. He has lost the confidence of the caucus and the electorate, and his actions have left him with many enemies but very few allies. Although he may survive the convention, current political trends point to another electoral defeat for the CPC. As tensions mount, the acute need for a shift towards centrism and the growing influence of social conservatism within the party will become incompatible. The pressure from two opposing factions could tear apart the conservative marriage forged by MacKay and Harper 18 years ago.

Featured image: Erin O’Toole speaking in the House of Commons. Photo by Erin O’Toole, licensed under the public domain.