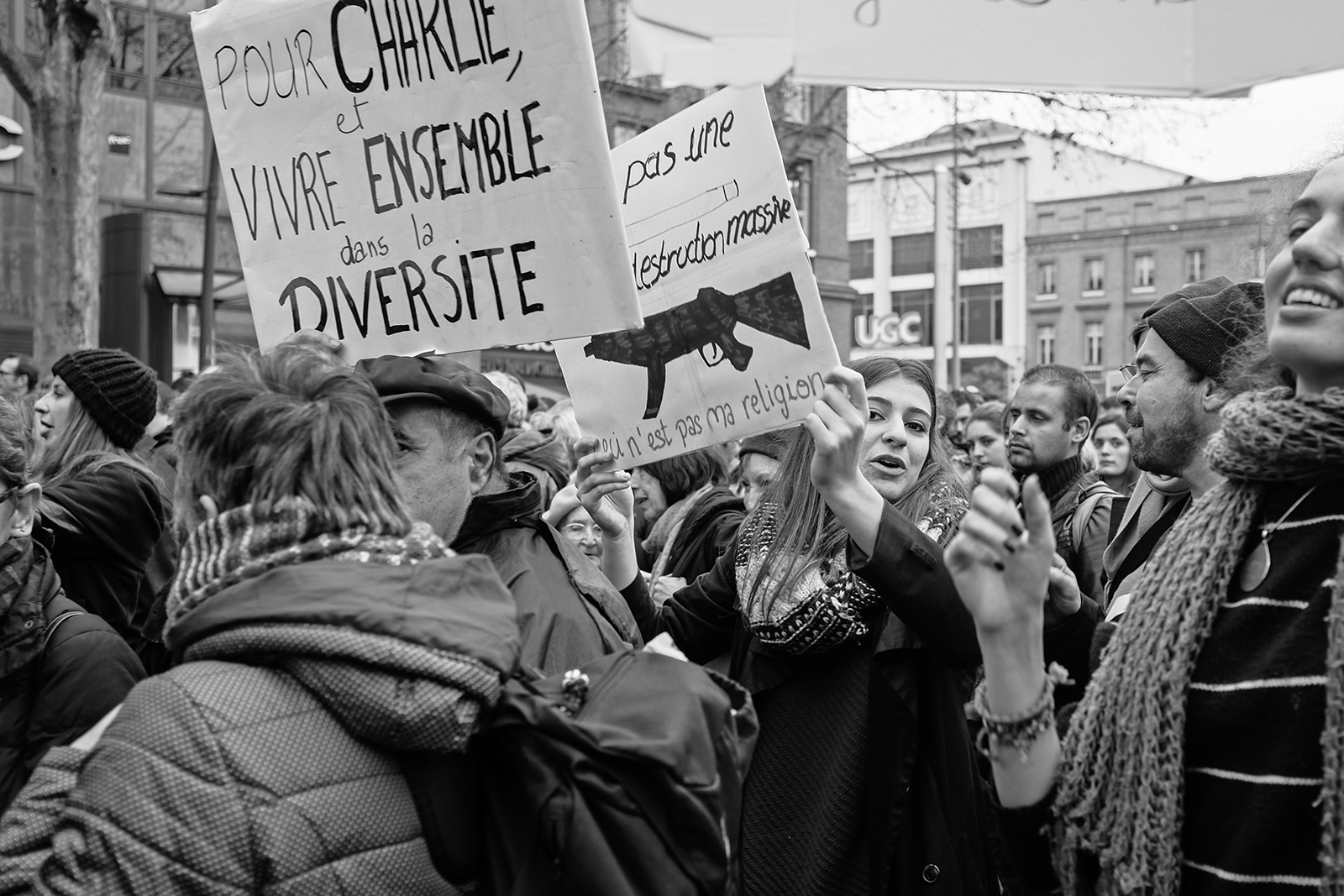 As French comedian Jamel Debbouze portrays it, France is not a blatantly racist country, but rather a “scared old lady with a large heritage, who needs to be reassured”. The old lady in question has recently felt a tremendous blow to her freedom of expression and national security, and is still quivering in the aftershock. The recent terrorist  attacks at the Charlie Hebdo office in Paris and a kosher supermarket have both underlined and triggered a new wave of tensions between religious/ethnic minorities and the larger French community.

Indeed, the impact can be seen not only in the French population and in the way its politicians have reacted, but also on the rest of the European community. Even the peaceful kingdom of Sweden has seen instances of violent outbreaks, as four mosques were set on fire in a week’s time. Back in France, Manuel Valls, the French Prime Minister, has even spoken of “a territorial, social and ethnic apartheid” when speaking of sensitive areas in France, something he had already brought up during the 2005 riots in the Paris area. His statement has provoked many commentaries, as it implies a huge failure in French public politics. Indeed, “segregation” would no longer only be suffered, but also implemented by French policy. There have therefore been several reports of vandalizing acts, with words of hate such as “dirty Arabs”, “murderers”, and the infamous “Je Suis Charlie” slogan spray-painted on mosques. In response to this and the attempted burning of a mosque in Poitiers, the Imam of Drancy deplored that “In the same way that these crazy people have done this [the terrorist attack] in the name of Islam, other crazy people have committed this same type of acts in the name of patriotism”.

Indeed, France has an established history and culture with deep roots, making it all the more difficult for certain citizens to see new elements assimilate themselves in French society. The nation has also historically been an example in terms of democracy, starting with the French Revolution and the writing of the Declaration of the Rights of Man and the Citizen in 1789. It seems that the Charlie Hebdo incidents, combined with the hostage crisis that occurred two days later, have galvanized the international communities’ attention and compassion for the French people. These incidents have also brought back to the table the country’s struggle in dealing with its immigrant population and its acceptance of religious diversity. Secularism in France has developed an almost “fanatic” stance itself, as it takes an extreme position in narrowing any possibility for debate around the question of religion, making it a taboo.

As Charles Taylor has elicited in The Meaning of Secularism, the French notion of ‘laïcité’ [secularism] is constructed around the management and control of religion [1]. In order to understand this, we must analyze the meaning of the French Revolution trinity: “liberté, egalité, fraternité” and look at it through a modern lens. The question of the hijab is an example that underlines the issue of liberty and equality in a contemporary debate. The law that forbids the wearing of the hijab in public was put into execution on March 11, 2011. Indeed, the notion of equality would suggest allowing citizens the choice of wearing the hijab[2], although the case made against it has cast doubt on whether this dress code was a “free act”[3]. The wearing of such a ‘signe ostentatoire’ [a material object used to transmit a certain message]  was seen as more of a hostile expression against the Republic than an act of piety. But can the French justly codify such aspects of a religion, especially Islam, which it often considers as alien to its own culture? Does it have the necessary tools to rightfully do so? The other question that Taylor enunciates in the context of the modern state is “What/whom is this state for? Whose freedom? Whose expression?”[4]. The France we know today has a population of 3.5 to 5 million Muslims; out of which at least 2 million have French citizenship; most of whom have immigrated after the Second World War, and later in result of the decolonization of Tunisia and Algeria.

After the official separation of the church and the state in 1905, the Constitution of 1958 clearly states: “France is an indivisible, secular, democratic and social republic. It guarantees equality before the law for all citizens without distinction of origin, race or religion. It respects all beliefs.”[5] The issue today mainly revolves around how we can apply such ideals to a France that is more diversified than ever in its mosaic of cultures and religious beliefs.

Minorities in France, most importantly the Jewish and Muslim communities, have experienced the latest January events with fear, anguish and confusion. As we commemorate the 70th anniversary of the Holocaust, many French Jews fear a relapse of antisemitism in Europe. For several years now, antisemitic acts have been repeatedly carried out throughout the country, including several shootings. For example, a man gunned down four people in 2012, including three children, in front of a Jewish school in Toulouse. Furthermore, one of the two hostage crises in Paris following the Charlie Hebdo attack took place in a kosher supermarket, also ending in four deaths. A France Inter reporter asked Marceline Loridan-Ivens, one of the last 200 Auschwitz survivors, whether she believed that the French people would be out in the streets if the victims killed fifteen days ago had been Jews [referring to Charlie Hebdo and the hostages]. Mrs. Loridan-Ivens’ firm answer was a chilling “No.”. In response to the growing fear felt by the Jewish community, French national security has multiplied its measures of protection for public areas at risk, such as synagogues, in front of which several policemen can now be seen patrolling. This last weekend, it was Denmark’s turn to be the target of terrorism, with the attempted murder of the controversial Swedish cartoonist Lars Vilks and the killing of a man outside of a synagogue, allegedly perpetrated by the same man. In response to the accumulation of these antisemitic acts, Israeli prime Minister Benjamin Netanyahu called on the Jewish people of Europe: “This wave of attacks will continue, I say to the Jews of Europe – Israel is your home“.

On the other hand, the Muslim community in France has also expressed concerns regarding their security. They speak of their fear to attend prayer, to be attacked in the streets because they are wearing the hijab, or simply for looking “Arab”. The Muslim community and French political representatives urge the population not to confuse these acts of terrorism perpetrated by extremist individuals ‘in the name of Islam’ with the rest of the Muslim population. The ‘post-9/11’ world in which we live in has seen Islam, and geographically the Middle East more specifically, as the media’s favorite targets. Islam in particular has been pointed at repeatedly in cases of terrorist acts, so much that the word itself is now commonly (and mistakenly so) directly associated with acts of terrorism carried out by Muslim extremists. Muslims in France are therefore ‘hostages’ of these preconceived confusions between a religion and individuals acting on their own accord, justifying their acts in the name of a religion they have interpreted for themselves.

As history demonstrates, in times of fear people tend to respond to violence and hate with even more violence and hate. As the Imam of Drancy also stated, “we must fight drawings with drawings, words with words, not with blood”. In the context of France, which is struggling to maintain a safe and inclusive space for its population while defending its principles, we must ask ourselves: how can France reconcile its ideals of secularism and laïcité with the reality of its citizens’ diversity? It appears that the old lady of France will have to grab her fears by the horns: questioning the political and intellectual taboos that have put ethnic and religious questions back on the table.