One Team, One Dream: The Current State of College Football 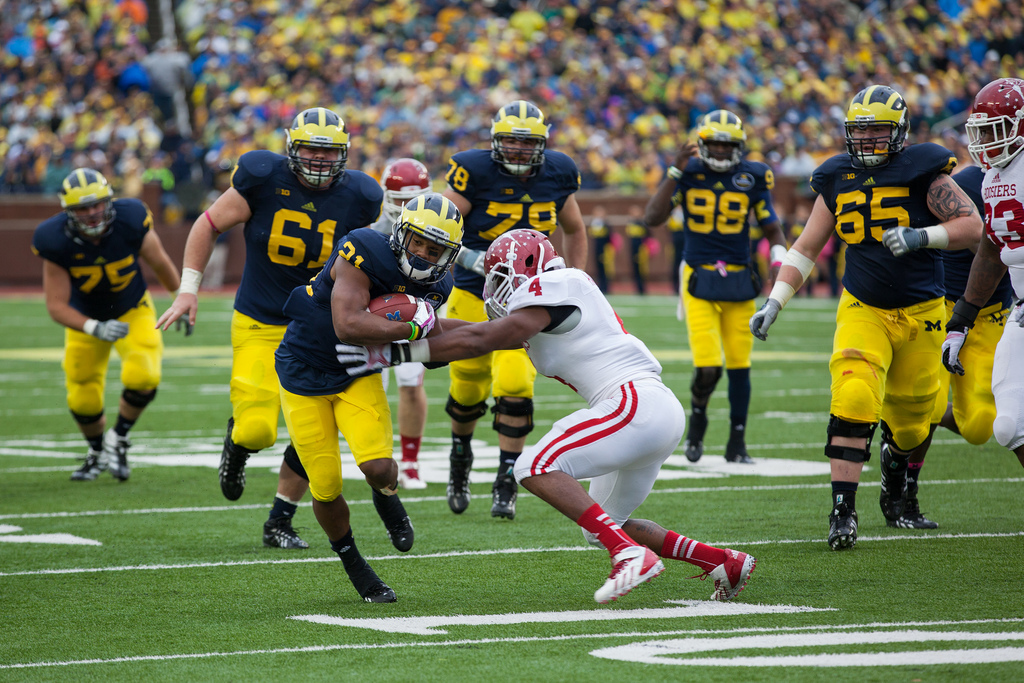 A major US industry has recently reached the billion-dollar-a-year threshold, thanks to the widespread popularity of its principal product. Competitors all across the nation vie for domination of the market. Executives are given salaries in the millions of dollars, and persistent growth is observed. The workers in this industry, however, are subject to harsh working conditions, in which they run the risk of serious injury each shift. Unless they are among the tiny minority who meet a certain standard of productivity, their careers are extremely short and precarious. While they are offered an incentive to work, they are not paid a wage, and only around two-thirds truly take advantage of this incentive. Worst yet, they have almost no voice in the workplace, despite being essential to the success of the product. Sound like a familiar situation? Of course, I’m talking about NCAA football.

From an outside perspective, it may be hard to grasp the sheer significance of college football to American life. The figures, however, don’t lie — $1.045 billion in total revenue was generated in 2017. The most valuable college football team (Texas) was recently estimated to be worth $129 million. Coach Nick Saban of the University of Alabama collected an annual salary of $11 million in 2017, with several others not far behind. The University of Michigan stadium can seat 110,000 people, more than any stadium in the NFL.

Given the sheer scale of NCAA football, one would expect to see significant benefits for the players. Upon investigation, however, this is simply not the case. The prospect of a lucrative career in the NFL is a statistical near-impossibility for most players, as the NCAA itself has estimated that only 1.5% of college football athletes go on to make the pros. Officially, the NCAA touts education as its main priority over athletics. Even though around 150,000 scholarships are provided to first and second-tier athletes (‘Division I’ and ‘Division II’) each year- only 2% of high-school athletes are offered an athletic scholarship and only some result in a degree. While rising in Division I (nearing 80% in recent years), graduation rates for Division II athletes have stagnated at around 50% for the past decade.

Football players in the NCAA are regarded as student-athletes and not employees, and as such receive few benefits outside of their scholarships. All student-athletes are required to be insured, usually through their own plan or with their parents, with the school plan acting as secondary insurance. The lack of an NCAA-wide insurance policy and the variance in coverage from school to school has resulted in players covering certain expenses out-of-pocket when their primary insurance plan did not. Since players are only covered for as long as they are on scholarship at the school, the college football insurance structure has also raised concerns about the costs and effects of long-term injuries, including concussions, which tend to linger for years beyond the initial incident.

NCAA football scholarships generally include room and board, tuition, and books, but student-athletes do not receive a salary. There are strict prohibitions on any forms of gift-giving or the provision of non-scholarship benefits to athletes as illustrated by past controversies. Following a 2010 investigation, The University of Southern California received one of the harshest sanctions in NCAA history as the school had, among other infringements, procured housing, a car, and other gifts for the family of star running back Reggie Bush. In the wake of these violations, USC was required to vacate its 2004 national championship title, and Bush himself returned the prestigious Heisman Trophy, an award that recognized him as the most valuable college football player in 2005.

The mercilessness with which the NCAA has been willing to punish infractions is indicative of its firm defense of the student-athlete designation through official policies. In the eyes of many football players, however, the ‘student’ aspect of this designation holds no weight. Outspoken NFL star Richard Sherman has been vocal about the heavy emphasis top schools place on the ‘athlete’ half; in situations where football practice and class time come into conflict, athletes are expected to attend practice. Though he is now among the elite few of the NFL, Sherman describes how his personal account balances sat in the red for most of his time in college, forcing him to make difficult financial decisions: as Sherman notes, “You gotta make decisions on whether you get gas for your car, or whether you get the meal for the day, you know, you got one of the two choices.”

College players have taken up their grievances with the culture of NCAA football through various means, none more high-profile than the unionization drive at Northwestern University a few years ago. Led by former player Kain Colter, a petition to unionize the football team was brought to the National Labor Relations Board in 2014. A ruling by the regional NLRB sided with the players, declaring that they met the criteria for employee status and were entitled to collective bargaining rights. Despite optimism on the part of labor, a 2015 appeal by the university ultimately reversed this seemingly landmark decision; in its ruling, the national NLRB refused to exercise jurisdiction over the case. This decision was guided by fears that the designation of players as employees could destabilize the entire college football system, while also noting that it would be unusual for a single team to be granted union status, given that unions in pro sports leagues represent the entire player base rather than each team. In light of the setback, Colter pressed on with his efforts by continuing to work with the College Athletes Players Association (CAPA), an organization intent on advocating for the interests of college athletes across the country. Priority issues for the CAPA include fairer medical coverage, a greater emphasis on graduation, and reducing the number of concussions in college football.

It is quite clear that the current state of affairs in NCAA football is in need of the exact sort of reform the NLRB was unwilling to permit. Without the players, the sport would not exist. Affording these players rights and fair representation is by no means a drastic measure, and it is, in fact, common practice in most major professional sports leagues across the nation.The NFL Players Association negotiates collective bargaining agreements for pro football players, as does the NHL Players Association for hockey and the MLB Players Association for baseball. There is no doubt that with enough support and organizing, a college football players’ union could serve the same function, and win similar victories.

In the spirit of the apprehensive NLRB ruling, some may fear that a union for college football would mean a union for all NCAA athletes, regardless of school or sport, which could have implications for non-profitable sports programs. Even if this were ultimately occur, however, there are many avenues for compromise. One option, popular in the major pro sports leagues, would be to incorporate a revenue-sharing model, paying athletes according to the revenue generated by their sports. This could ensure that athletes in such disciplines as football would receive their fair share of compensation. This would also ensure the survival of less lucrative sports programs, whose feasibility may otherwise be threatened while meeting the primary demands of athlete-activists: medical coverage, academic support, and a democratic voice in the workplace.

Next fall, another season of NCAA football will kick off, and within months will generate hundreds of millions of dollars in revenues. Uncertain as the season’s football outcome may be, one result is already known: the players will not see a dollar.