Opening the Floodgate of Money in Politics 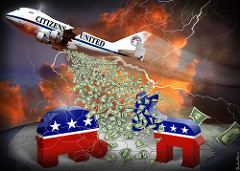 In 2010, Citizens United v. Federal Election Commission overturned restrictions on corporate spending in elections. Echoing popular opinion, Justice Kennedy rationalized the decision by asserting that “independent expenditures do not lead to, or create the appearance of, quid pro quo corruption.” This decision and subsequent cases obliterated a century of campaign finance laws. The resulting proliferation of Super PACs opened the floodgates for unlimited amounts of money to be poured into political campaigns, benefiting a handful of special interests threaten to dominate political funding. 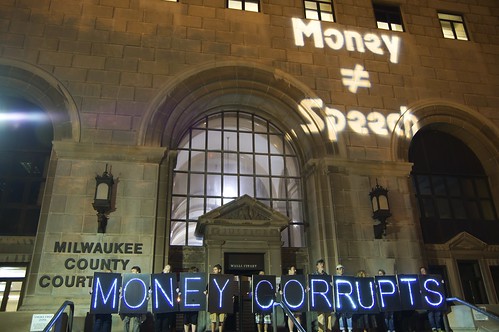 Money creates the opportunity for corrupt dealings and just one exposed scandal will result in public outcry, plummeting confidence in the government and the widespread perception of corruption. Following the Citizens United decision, there has been an outpouring of media accounts reporting on outside spending. The questioning of the U.S. media casts doubt on the integrity of elected officials and the competence of the regulations meant to prevent their corruption.

The Citizens United decision and subsequent cases following the same logic cleared the way to pour unlimited amounts of money into the election campaigns. In McCutcheon v FEC, Justice Breyer argued that the decision, “creates a loophole that will allow a single individual to contribute millions of dollars to a political party or to a candidate’s campaign. Taken together with Citizens United v. Federal Election Comm’n, 558 U. S. 310 (2010), today’s decision eviscerates our Nation’s campaign finance laws, leaving a remnant incapable of dealing with the grave problems of democratic legitimacy that those laws were intended to resolve.”

A New York Times analysis of the 2016 presidential election shows that 156 families are responsible for more than half the money raised in the 2016 presidential campaign. This flow of money from corporations, unions and the wealthy to electoral campaign is drowning out the voices of the average voter and smaller donors. The huge monetary investment in elections is creating a circus of politics, forcing politicians to juggle the demands of their benefactors with their duty to their constituents. In addition, with party politics, constant scrutiny and a whole slew of other difficulties, it is comprehensible that politicians hardly seem to get anything done.

While there’s nothing inherently wrong with campaigning, the flood of money pouring into the elections has turned campaigning into an arms race. With every candidate trying to one up each other they’ve forced the American public to face a blitzkrieg of ads. Moreover, in attempting to be inventive and original, overzealous candidates have turned campaigns into circus acts: selling flip-flops and eye charts, and posting videos of making machine gun-cooked bacon and blending a cell phone.

The increasing length of the presidential campaigns is absurd and their increasing cost even more so. Not wanting to fall behind, politicians will take the necessary measures; whether it’s starting earlier, buying even one more ad, or offering another novelty item. Unfortunately, this strengthens the control of large donors have on their politicians by increasing the monetary burden of campaigns.

Earlier in the race, Donald Trump boasted about how he refused money and even accused some of his rivals of being “puppets” controlled by their donors. During a news conference, he said, “I used to be the king of [money in politics]…I know the system better than anybody. The fact is that whether it’s Jeb or Hillary or any of them, they’re all controlled by […] the special interests, the lobbyists and the donors.”

In the first GOP presidential debate, Trump said, “Hillary Clinton, I said be at my wedding, and she came to my wedding. She had no choice because I gave to a foundation.” Despite the attention caused by his inflammatory remarks on subjects such as race, gender, and class, Trump casts a stark light on the effects of money in politics.

However, even he might be feeling the strain of the election on his wallet as Trump revealed in a filing to the Federal Election Commission. The vast majority of the money he raised and spent this summer came from what he called “unsolicited contributions”. Even Trump won’t turn away the support of Super PACs, which can accept unlimited donations. Politico reported that Trump attended a fundraiser for the Make America Great Again PAC last month. The Daily Beast noted that some of the consultants listed in the PAC’s filings were lobbyists. 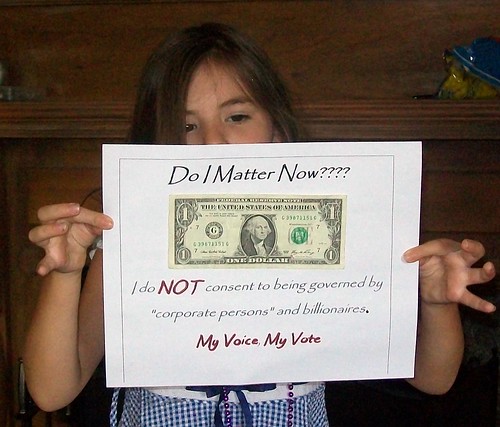 While the Citizens United decision resulted in the proliferation of Super PACs, this came with the condition that they stay totally independent from a candidate’s campaign. However, as Trump and the Make America Great Again PAC showed, the reality is that there can be a lot of ‘coordination’ between Super PACs and campaigns, such as attending the PAC’s fundraiser.

The Federal Election Commission sets the rules for what activities are considered independent or ‘coordinated’ with a campaign. Unfortunately, the FEC rarely provides clear guidance.

A majority vote is required for an advisory opinion but since both parties appoint three of the FEC’s six commissioners, consensus is difficult. Since the implementation of Citizens United, the FEC is repeatedly deadlocked on important questions about coordination and independence. As a result, the FEC is allowing conduct that permits campaigns to work extremely closely with Super PACs without fear of sanctions.

Elections are a no win situation, except for the corporations. Politicians are forced to lead long, expensive campaigns whose main source of funding is corporations or a few wealthy individuals. These donors can choose to donate unlimited funds through a Super PACs, which work in close coordination with campaigns. Or they can donate through non-profit, tax exempt groups which may hide the identity of their donors.

While those favoring less regulation contend that campaign donations are a form of free speech, it seems that they are in fact stifling the very politicians who are supposed to safeguard our rights.

Then the question is not whether money results in corruption, rather if one believes their politician will stand for the needs of the people in spite of the demands of their donors? The FEC and all the campaign finance laws were there to hold politicians accountable. Citizens United made that more difficult. They were contingency plans in the face of human error. Without a solid safety net, the country is just waiting for the next Watergate scandal to come barreling over.