Opening Up Old Wounds – Political Instability in Bosnia and Herzegovina 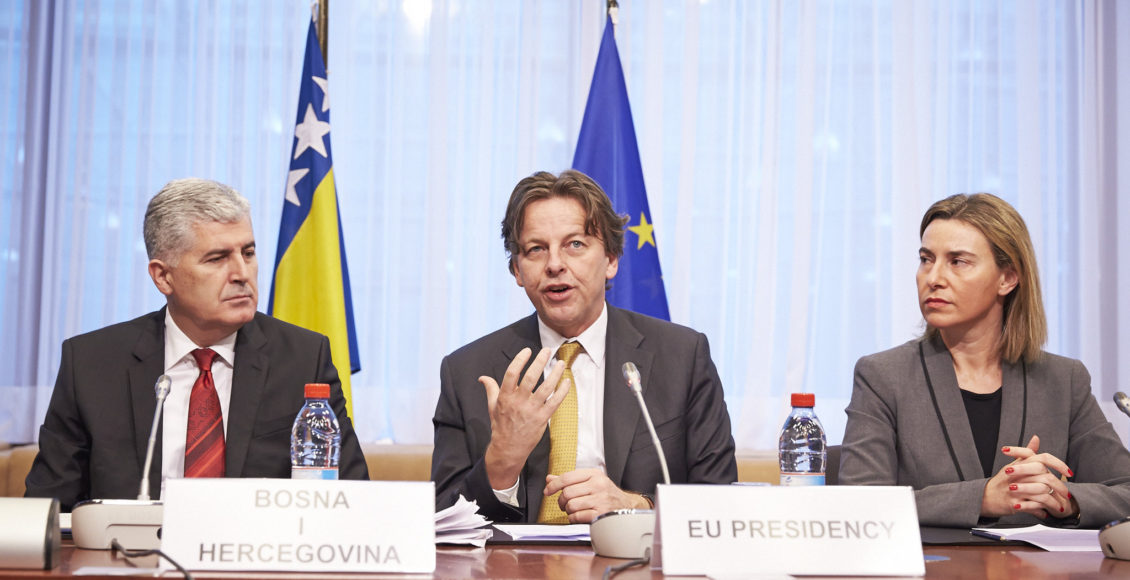 The past week will be remembered as a historical landmark in Bosnia and Herzegovina’s (BiH) accession to the European Union. Or at least it would have been had there not been an anti-constitutional referendum held by one of the state’s two political entities. In the span of five days, BiH witnessed one of its brightest, the acceptance of the country’s membership application by the European Council, as well as its darkest moments, the Republic of Srpska (RS) holding a successful referendum on the future of the entity’s “national day”. The polar opposite events reflect just how clouded this country’s future has become and serve as a serious challenge to stability in a region that has not been at peace for more than fifteen years. The situation is beginning to smell a lot more like the 90s with each headline.

Yet again, skeletons of the war in Bosnia and Herzegovina are being brought out to light by those who began it all in the 1990s. For those in favour, or secret admiration, of Banja Luka’s illegitimate referendum on the Republika Srpska Day, Saint Stephan’s (January 9) represents a Holy celebration for all Christians; as for the rest of the country and region as whole, it is a reminder of the day Bosnian Serbs declared their independence from BiH in 1992 and the preceding conflict that claimed nearly 100,000 lives and misplaced millions.

Senior European officials have called on institutions of Bosnia and Herzegovina to resolve this issue and respect the rule of law through established legal processes and the existing constitutional framework. On Saturday, September 24, the Constitutional Court temporarily banned the holding of the referendum and confirmed the unconstitutionality of the so called “Day of the Republic of Srpska” due to its discriminatory nature towards Croats and Bosniaks. Under the terms of the Dayton Accords, decisions of the Constitutional Court are final and binding, therefore the RS authorities’ insistence to implement the referendum is “a drastic violation of the Accords, the demolition of the rule of law and a threat to the stability and survival of the state, but also seen as a possible rehearsal for a future referendum RS’s secession.” Nonetheless, the referendum was held and passed by an overwhelming majority of 99.8% in favour of the question.

The Republika Srpska President Milorad Dodik’s obvious and continued disregard for state institutions further devalues the central government and pushes the meaning of Dayton to new borders. Just last December, the RS Ministry of Interior decided to unilaterally halt all cooperation with the BiH General Attorney’s Office and bar State Security Agency (SIPA)’s access to RS files after SIPA arrested five RS police officers for war crimes. The list of Dodik’s disregard for Dayton continues after the referendum. The Croatian population in Republika Srpska saw the most drastic decline in the post-war years as the population dropped from roughly 200,000 to barely 10,000 today. Dodik’s government has done less than minimum required to help Croatians and other minorities return to their homes, while even those brave enough to come back to their abandoned towns suffer from institutional discrimination. In the week leading up to the referendum, the RS national assembly promised to allow Croatian youth in the county the Pelagicevo education in their mother tongue, a right guaranteed by Dayton. On the morning after the referendum, Croatian youth attended school only to discover that they would not be receiving new books in Croatian nor a new teacher, but that they would have to continue the rest of the school year in Serbian.

As the situation continues to escalate, prospects for stability in BiH appear dismal. The High Representative for BiH reserves the right to “remove from office public officials who violate legal commitments or in general the Dayton Peace Accords”; however, invoking this power and removing Dodik render the potential risk of only escalating the current turmoil.

President Dodik’s ultimate goal is none other than the dissolution of BiH, which he has made clear on numerous occasions hitherto; despite issuing several ‘serious warnings’ the international community continues to turn a blind eye. Certainly there is reason for concern for the High Representative for BiH Valentin Inzko when the RS President claims that “in a nutshell, Bosnia [and Herzegovina] is a miniature Yugoslavia and we [the Serbs] are being forced to accept something that does not work anywhere, anymore.” After the referendum votes had been counted Sunday night, Dodik spoke to thousands gathered on Banja Luka’s main square where he declared “RS a country […] with effective government and […]people who want a Republic“. As emotions from Sunday’s referendum settle, RS leadership has already pledged to reinstate a RS anthem and coat of arms, despite previous Constitutional Court rulings on the illegality of both. It would be interesting to see what Mr. Inzko would say if perhaps the leader from his native Carinthia had such views of Austria. Would he turn a blind eye if the police of Carinthia disobeyed orders from Vienna? Or would the world stop and watch as the Austrian Constitutional Court’s rulings get tossed in the bin? For some mind boggling reason, the international community continues to be a bystander as Dodik and his SNSD party govern the RS as an independent country.

The European Union seems far too busy with the European integration of other countries in the region that they seem to have forgotten about the country that needs their help the most. The High Representative of the European Union for Foreign Affairs and Security Policy Frederica Mogherini issued a press release prior to the referendum in which she called all sides to ease tensions and work together on long overdue reforms. Is Brussels not concerned about a clear breach of the Dayton Peace Accords? Turns out Europe is not the slightest bothered. Serbia is currently in full swing with accession negotiations and has received significant praise from the European Head of Enlargement Johannes Hahn. The newly elected Prime Minister Aleksandar Vučić went from a Milošević regime propagandist in the 90s to Serbia’s largest europhile. Juncker and his gang have endeavored to pull Serbia away from Moscow, yet despite these efforts the country remain in between both polls.  Vučić has distanced himself from ethnopolitics in BiH by withholding open support for the referendum nor condemning it. The Prime Minister’s complacence is not a reflection of opposition to Dodik, but rather a calculated appeasement to the brass in Brussels. While the EU praises Belgrade’s efforts to cooperate, it does not respond when the Minister of Foreign Affairs Ivica Dačić mocks the decision of BiH’s Constitutional Court. Dačić responded to a letter from the former Bosniak War Commander Sefer Halilović warning the international community of a possible armed conflict should the referendum vote pass. Minister Dačić’s address echoed propaganda paroles from the 90s when he commented that “the Constitutional Court could change at least one line in its decision. But they did not care to compromise, instead (the ruling) was an excuse for war plans, for what the Muslims are obviously planning (…) Serbia will not allow an attack and the destruction of Republika Srpska.” Sounds rather inflammatory given that the Minister of Foreign Affairs was responding to a retired military personnel with no army to command and no political power.  Tabloids in Serbia have been flooded with sensationalist titles claiming Bosniaks are preparing to attack RS, reinforcing MFA Dačić’s promise to defend the entity. Furthermore, Dodik believes Halilović’s word should be taken as proof of Bosniak plans to kick out his people from BiH. Sabre rattling happens on a near daily basis in BiH, but it is one thing when Dodik’s parastatal commits the deed and another when it’s coming from the Foreign Minister of a neighbouring nation. In trying to pull Serbia towards the EU and away from its traditional Russian partner, the Union has formulated an appeasement policy that is beginning to take the contours of 1938. Lest we forget the lesson learned from sacrificing the fortunes of others in a far away land for the good of our own short term peace.

It is unlikely an armed conflict will break out. Bosnia and Herzegovina shares a border with the EU and NATO and neither actor would allow bloodshed so close to home. Then again, the world said the same about Ukraine  before the ongoing conflict broke out. Nonetheless the damage caused by this referendum will be irremediable. Milorad Dodik has spent years testing the limits of the international community and has finally dealt a crippling blow to the outmoded Dayton Peace Accords. This referendum will only perpetuate the downward spiral of what little stability endures in the deeply divided Bosnia and Herzegovina today. This is Bosnia and Herzegovina, a state in the heart of Europe where ethnic entrepreneurs can sidestep the rule of law, and brinksmanship is expected at every election season. What will come next in the madness that is BiH? Nobody can predict the path the country will take from now, but one thing is sure: the days of a peace treaty constitution are finally over and it is time for change. Let us all hope that this change comes peacefully at most.