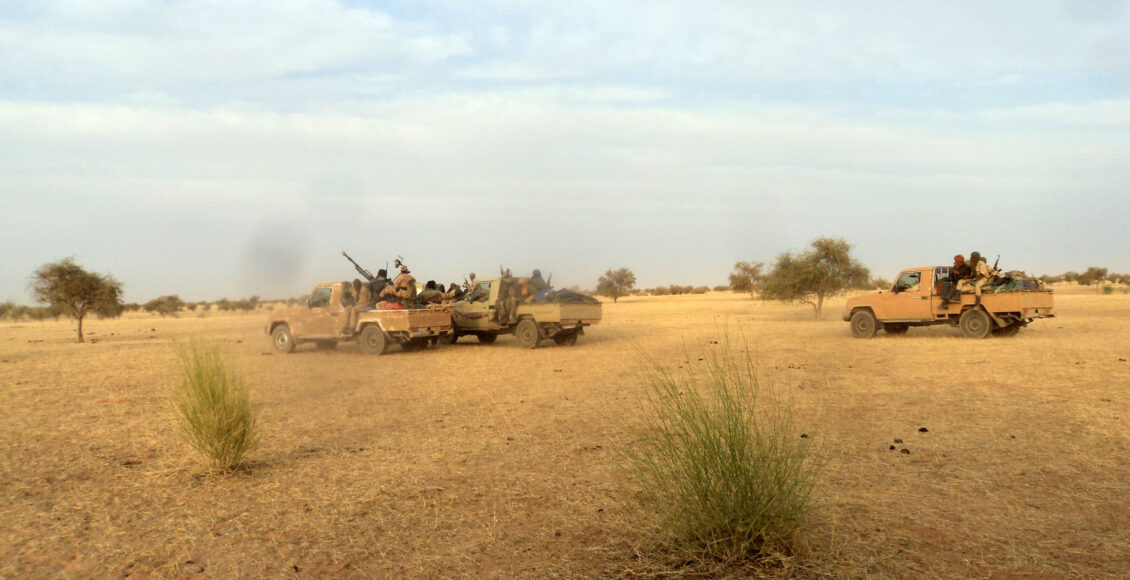 “Armed Islamist fighters race near the Mauritania-Mali border on May 21st.” by Magharebia is licensed under CC BY-ND 2.0.
Share

For the last eight years, French forces have been engaged in “Operation Barkhane,” an attempt to root out Islamic militants in the Sahel. Started in 2014, the operation was initially intended to help Mali reclaim its territory from al-Qaeda-aligned terrorist groups, and more broadly, to drive Islamist militants out of the Sahelian strip, a semi-arid region across North Africa that is an ideal breeding ground for terrorist movements. In June of 2021, President Macron announced an end to Operation Barkhane, stating that France would begin withdrawing most of its troops from Mali in early 2022. The unexpected announcement was celebrated by Malians who resent French military presence in the country and feel that it has only exacerbated its problems. However, many international observers are concerned that France’s reduced role in the Sahel will expand the power of Islamic militants, reducing the security of the region and increasing the likelihood of terrorist attacks in the West. A new actor, Russia, also appears poised to fill the void left behind the end of Operation Barkhane by intervening militarily in the Sahel. This complex situation raises several questions. Namely, why is France withdrawing now? What impact has Operation Barkhane had on the region, and what is likely to occur now that Operation Barkhane is coming to an end?

Security is one of the most important factors driving France’s involvement in the conflict. In the post-9/11 era, France has decided to act as a counter-terrorism pillar in the Sahel region. Mali’s recent turmoil stems from the 2012 military coup that toppled the government. Following this event, jihadist groups from North Africa seized the opportunity to carry out their own attacks throughout the Sahel region and occupied territories. In early 2013, advances by Islamic insurgent groups in Mali continued with the occupation of Konna, located midway between the Islamist-and-Tuareg-secessionist-controlled north and the Malian government-controlled south of the country. Thus, as part of the War on Terror, France decided to intervene in Mali on the grounds that this would help ensure its national security and that of its former colonial territories in Africa.

However, it should be noted that the Sahel is a region rich in natural resources such as uranium, oil, and gas, which French companies like TotalEnergies exploit in specific extraction zones. Critics have argued that France’s intervention in the Sahel is an example of neocolonialism because it reinforces French influence in the region’s political, economic, and military dimensions, infringing upon the sovereignty of affected African nations. Ultimately, France’s involvement in Mali has been driven by a desire to act as a pillar of counter-terrorism by preventing the crisis from spreading to the rest of the region, elevating its international status and relations with its former colony while simultaneously protecting its long-term natural resource extraction.

France’s withdrawal and the reasons behind Macron’s decision

There are several reasons for this change in France’s strategy. One of these reasons is that Mali continues to be wracked with violence. The anti-terrorism efforts of French forces do not appear to have been effective. Mali’s political instability may have also played a role. On May 24, 2021, Mali’s armed forces compelled President Bah N’Daw and Prime Minister Moctar Ouane to resign and dissolve the government. They then installed a transitional government committee more willing to negotiate with Islamic insurgents who control much of the northern part of Mali. After this military coup (the third in a decade), President Macron has been increasingly reluctant to assist the Malian government, as France is vehemently opposed to negotiating with rebel groups. Additionally, the recent deaths of French soldiers have triggered a backlash among the French public, leading to decreased support for intervention in the Sahel.

In response to France’s new approach to the conflict in Mali, Malian Foreign Minister Abdoulaye Diop expressed disappointment, leading to diplomatic tensions between the two states. However, on a civilian level, the announcement of the French withdrawal was celebrated by the population. As Samba Diakite, a cell phone seller in a popular Bamako market, said: “If they leave, maybe people who want to fight for real, without playing politics and without exploiting our wealth, will come to help us.” A large proportion of Malians believe that France’s military intervention is part of a neo-colonial agenda, with France benefiting from the exploitation of resources and profitable trade agreements at the country’s expense.

Regional impacts and new actors in the Sahelian strip

In its attempts to ostensibly secure the region, France has contributed to the underdevelopment of the country and its transformation into a war zone. Following the success of Operation Serval in 2014, French forces decided to remain permanently in the territory to ensure its stability. Its foreign intervention has also led to general political and economic instability, an increase in the flow of refugees to neighbouring countries, and a worsening of the humanitarian crisis – for example, food insecurity has become a significant concern. Thus, it appears that in the long run, France’s costly interference in Mali has not been beneficial as it has brought few visible results and instead has been responsible for negative impacts on the country’s development, sovereignty, and security. Following the May 24 coup and the recent French withdrawal, Mali is currently experiencing political instability that hinders all aspects of its development. According to Nicolas de Rivière, the French representative to the UN, the holding of presidential elections should resolve these multi-dimensional challenges, which will lead to increased international aid contributions. Doctor Mariko, President of the Party SADI, emphasized this point by claiming that “the security issue of Mali can only be solved by a legitimate and legal leadership and not the way of French foreign interests,” further highlighting how France has failed to improve the country’s development condition. In the meantime, Russia is slowly asserting its place to fill the void left behind by France’s withdrawal. While Macron assured that the country would remain engaged through “international alliances between regional states,” Russia’s interference is growing in the Sahelian strip through the presence of the mercenary Wagner Group.

According to Dr. Siegle, director of the research program at the Africa Center for Strategic Studies, “[Russia has] gained unprecedented influence in the [Central African Republic], and ultimately Wagner has been implicated in human rights abuses, extrajudicial killings, rape, and torture,” reflecting the group’s omnipresence in fragile African states and its controversial methods of operation. Russian paramilitaries are reportedly close to an agreement to deploy more than 500 mercenaries on Malian territory to train and advise the local military, protect senior government officials, and fight extremists operating in the north of the country. In the foreseeable future, we can thus wonder how Wagner will influence the key aspects of the Malian conflict and impact the country’s sovereignty and development.

Today, France is at a crossroads where it must decide whether to maintain its controversial and costly influence in the country or cede it to other international actors, such as the Wagner Group, known for their human rights violations. Despite recent changes, the crisis in Mali does not appear to be ending, and its spread throughout the Sahel could have a serious impact on the security of the region and neighbouring countries. Overall, the end of Operation Barkhane will affect Mali and the entire Sahelian region, bringing in new external actors, new questions, and new challenges, of which only time will reveal the results.

Featured Image: “Armed Islamist fighters race near the Mauritania-Mali border on May 21st.” by Magharebia is licensed under CC BY-ND 2.0.