Opinion | A Convoy For Truckers? The Forgotten South Asian Drivers 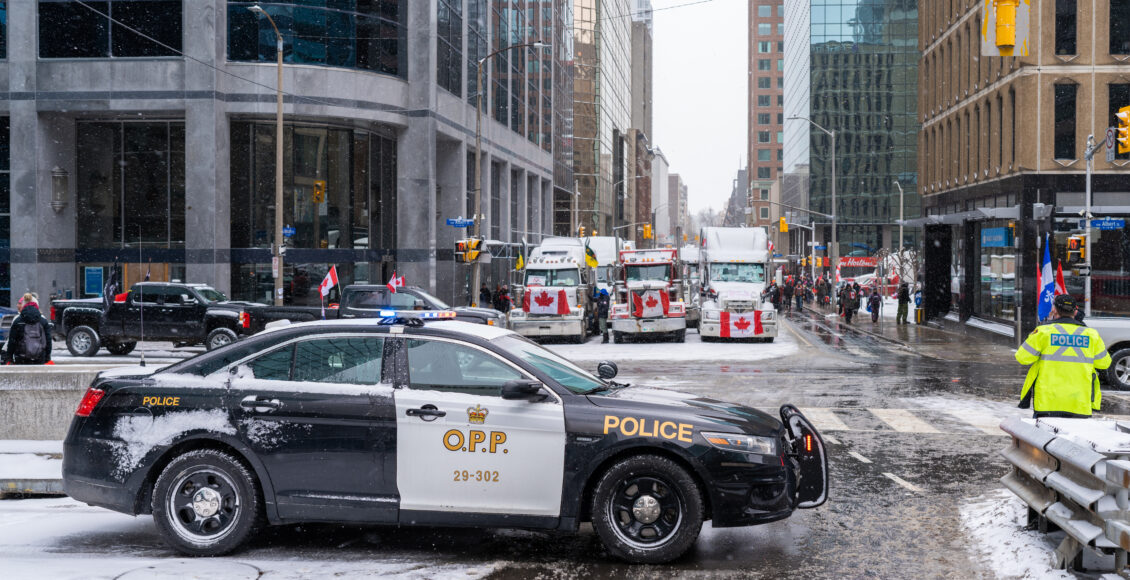 In the past several weeks, news of the so-called “Freedom Convoy” has been the centre of media attention across Canada and globally. What started as protests against a vaccine mandate for truckers travelling across the US-Canada border have since become dominated with images of right-wing extremists from across Canada displaying hate symbols and threats. Protestors have committed acts including dancing and urinating on the National War Memorial in Ottawa, among other national monuments, and displaying swastikas and Confederate flags. Since its inception, the Convoy has become a symbol for the far-right ideology, capturing the national consciousness and claiming to represent the needs of the entire industry. But there’s one group of truckers that is not as represented in these protests, nor are they in favour of the Convoy’s message: South Asian truckers.

With a severe driver shortage, new immigrants have filled the gap facilitating essential trade across North America. Many of these immigrants are from South Asian countries — chiefly India. According to the 2016 Census, Canada has 181,330 truck drivers, with around 33 per cent of them hailing from outside of Canada. South Asians make up 55.9 per cent and 53.9 per cent of drivers in Toronto and Vancouver, respectively. Decent salaries are an incentive to join the industry, with the 2018 yearly average for a Canadian truck driver being $48,744 a year (although experienced big-riggers can earn over six figures). For migrants, this benefit combines with low barriers to entry and the respect that trucking has across India, especially Punjab, where trucking culture is celebrated and drivers are deeply passionate about their work. Canada is no different. Constituting nearly one-fifth of Canadian truckers, South Asian truckers are crucial to the movement of goods and services.

For most of them, the Convoy is a disruption to their source of income. Managing to have blockaded some border entry-and-exit points, it disrupts the livelihoods of those who depend on having steady work to support their families and communities. As Kulpreet Singh, founder of the South Asian Mental Health Alliance, put it in an interview with 5XPress, “This convoy is kind of purporting to represent all truckers, but a lot of South Asian truckers have literally just been working away during the pandemic, trying to keep their family safe.” Many drivers live in households with elderly parents and in-laws, driving heightened willingness to get vaccinated. And like many new Canadians who may not have much in terms of savings or wealth, dependable and steady pay is essential. For the drivers, the vaccine is a way of protecting both their livelihoods and their families, rather than an infringement on freedom. Along with other groups, South Asian truckers make up the nearly 90 per cent of truckers who are vaccinated, begging the question: who exactly do the protests represent?

Despite protestors claiming they represent the entire industry, the Canadian Trucking Alliance has denounced the movement. Further, as Jagroop Singh, head of the Ontario Aggregate Trucking Association, stated in an interview with The Globe and Mail: “Nobody invited me or any South Asian truckers I know. In fact, we don’t even know who the organizers of this protest are. Nobody asked us if we agreed with their demands.”

An Edmonton truck driver says he and other South Asian truckers felt like "hostages" at the Coutts border because of the freedom blockade. @sarahsinthenews finds out how he eventually made it home.#yeg #Coutts #truckers pic.twitter.com/gPJPFeMc9F

A CityNews Edmonton news report highlighting the difficulties the Freedom Convoy has made for South Asian truckers. Via Twitter.

While their demands for removing vaccine mandates and restrictions can be found on the front page of any major domestic news outlet, the flavour of right-wing extremism that is currently on display certainly doesn’t advocate for the real issues facing the industry. Indeed, there are more pressing matters than protesting Trudeau’s vaccine and public health measures. Labour shortages, exploitation, wage theft, and a lack of infrastructure all affect drivers to a much greater extent. What’s more, the protestors overshadow those advocating and raising awareness for these more real and serious issues. “There are protests that have happened locally for road safety, and in Ontario for wage improvements, and for getting support for those drivers who have been exploited,” Singh said in another interview. In a viral video, one South Asian trucker, Lovepreet Singh, begged for a cessation to the blockade, saying, “we don’t feel safe to go via Coutts border [one of Alberta’s crossings]…I don’t know what message they want to give if they want to block their own truckers and ask for freedom.” If the Freedom Convoy cares about truckers’ wellbeing and safety, these issues should be front and center of their message.

At a deeper level, the recent protests are much more than a movement that’s been taken over by right-wing extremists and hate groups. South Asian truckers work tirelessly to provide for their families, not to mention helping to support the economy of the nation by facilitating the efficient movement of goods and services. In 2017, 90 per cent of all freight shipments within Canada were carried by truck, to provide a sense of how essential the industry is to the functioning of the nation. For these truckers, the Convoy represents the loss of future work due to blockades, job insecurity, trucking companies shutting down due to even greater driver shortages, and a plethora of other issues caused by the outspoken minority. For them, the individuals who choose to participate in the Freedom Convoy are more disruptive than any public health mandate. These protests, which self-professedly are for truckers and for the trucking industry, are doing the exact opposite. They are hurting truckers’ livelihoods, drawing attention away from the dangers they face and slowing down industry growth.

Given that almost 90 per cent of truckers are vaccinated, the Convoy could be dismissed as a small, unrepresentative, fringe movement. In every sense of the phrase, it certainly seems like it. Yet, the trucks of this fringe minority, parked outside Parliament Hill, are hurting every other driver who remains on the roads. Their professed concern for truckers is nothing more than a malicious apathy and utter disregard for the true issues of the industry. This malicious apathy draws critical attention away from the real issues that hurt everyone, and especially the South Asian drivers. For them and the rest of the industry, the Convoy has undermined all their efforts to play by the rules: following vaccine mandates and staying on the road in hopes of protecting their families.