Opinion | On “Meeting” Malala: A Review of Influence MTL 2018 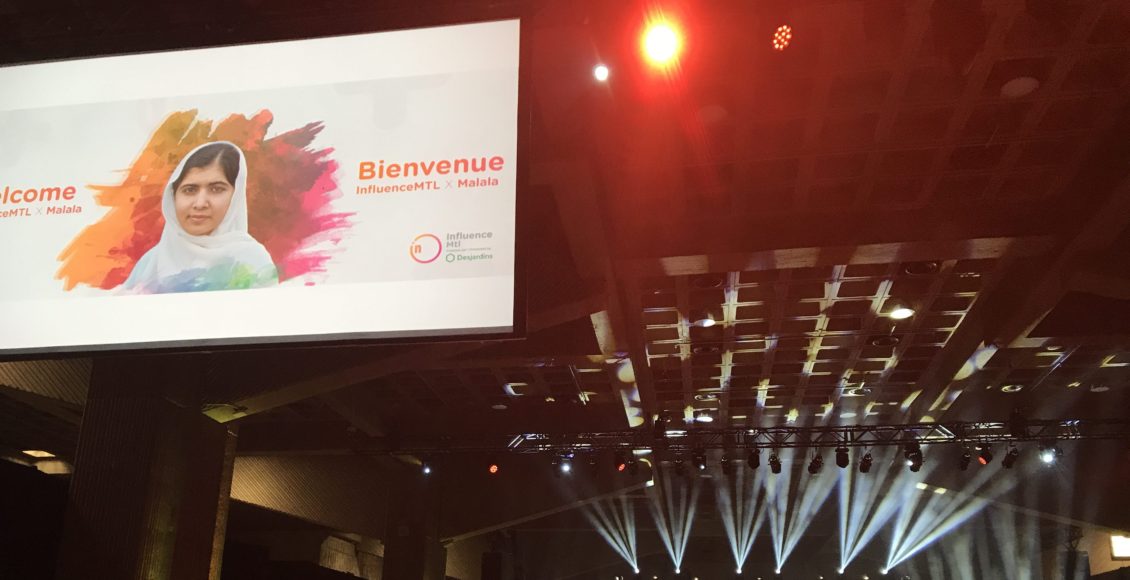 It was late, around 10:45 pm, when MIR Editor-in-Chief, Sarie Khalid, called me. Standing in line at the Basha on Parc Avenue, the last thing I expected him to say was, “Hey, want to speak with Malala tomorrow?” Naturally, my answer was an ecstatic yes. This sudden, thrilling initial tone would characterize the subsequent quest that was covering Malala Yousafzai for MIR. Little did I know, this journey would take me across the city in hot pursuit of the story.

On September 26, Influence MTL hosted their second annual Entrepreneur and Influencer conference, aimed at “promoting and championing Diversity, Inclusion, and Leadership,” spotlighting Malala Yousafzai as a key panelist alongside prominent Quebec businesswoman Danièle Henkel. Having campaigned for girls’ rights to education since she was ten years old, Malala became the youngest recipient of the Nobel Peace Prize in 2014. Simply being in the presence of such a fearless, resilient voice was an incredible honour.

During the much anticipated Q&A panel, Ms. Yousafzai touched on a wide variety of issues ranging from the inclusion of men and boys in the fight for gender equality to the female role models in her life. “Men and boys need to join this fight for equality, it is not just on women. It’s about their daughters, it’s about their sisters, it’s about their wives,” Malala said. “When we educate women, when we give them equality, we are not just helping individuals, we are helping the whole society.” In response to a question posed by MIR, about how we university students can take initiative to mobilize for issues they care about, Ms. Yousafzai said of her own experience “I started speaking up and realised that some people tried to get rid of my voice. Just my voice. They were afraid of it because it was so powerful.” “You do not need to be 45, or 60, or 70 to bring change. You do not need to have qualifications. You can bring change at any age, […] and make this world a better place.”

To my surprise and great excitement, MIR had been given a VIP pass earlier. As such, we were granted exclusive access to a “meet-and-greet with Malala” following the Q&A, as promised by the website’s ticket package page and schedule. Seeing no location listed on the official schedule, though, I sought the answer from an organizer. No big deal. “Oh, I’m not sure there is one.” Bizarre. Determined to get to the bottom of this, I tried again with another organizer. “It already happened in the back, you just missed it.” After several frustrating dead-ends, receiving five to six different responses that ranged from that fact that it simply did not exist to it happening at varying, uncorroborated locations, I had had enough. Never mind the apparent unwillingness to help, the very principle of a promise of a meet-and-greet, something VIP pass holders had paid a whopping $999 for, was in question. By this point, annoyance took over frustration, which had replaced my initial confusion. Finally, I was directed to two organizers who seemed to agree on a location, pointing me to a reception hall nearby Old Port. “You’d better hurry, there are only 20 minutes left.” And so I did.

Not even having time to question the validity of the address, I called an Uber as fast as I could, throwing caution to the wind as I single-mindedly hurled myself across the city and towards the story. It really was tunnel vision at that point, a journalistic urge overtaking any semblance of common sense. When I arrived, however, it quickly became apparent that the event itself was more than disappointing.

The supposed “meet-and-greet with Malala” was nothing more than a glorified networking reception in which not a single VIP pass-holder even had access to her. In trying to take a photo, I was immediately threatened with the confiscation of my phone. Malala was sequestered off to a corner by a protected line of security, more than 5 metres away from the event, where only select personnel could enter, completely nullifying the essential premise of a ‘meet-and-greet’ pass. For a conference that had emphasized diversity and inclusion, this was a low-blow. For VIP-holders who had invested roughly a month’s rent, wherein this event was an explicit promise, this was a lie. As for me, I question the very integrity of the conference’s promises.

Speaking with Global News ahead of the conference, founder Thierry Lindor revealed “Influence MTL was basically started because I would go to conferences and I didn’t find any conferences that were affordable. And the minute you are unaffordable, you lose diversity,” as the rationale for the conference’s creation. To be sure, part of this vision was indeed realized in the wide access to the Q&A panel for all ticket holders, including a limited number of free tickets that were available for children and seniors, but the utter shadiness and organizational ambiguity that followed – not to say the false advertising of the “meet-and-greet” that went against all basic notions of the purported inclusion so heavily preached – reeks of deception.

To this, I urge greater marketing responsibility on the part of Influence MTL. However, I also congratulate them on bringing such an inspirational figure to Montreal and allowing her to touch the hearts of so many. Perhaps the biggest takeaway from the conference for us university students, still, is “young people do care about women […] they are concerned about the environment, they are concerned about climate change […] about racism and sexism. They care and they want to make change […] so, believe in yourself.” This is especially vital at times like these, in which the news cycle has been saturated with what only seems like bad news. We care. And we want to make change.