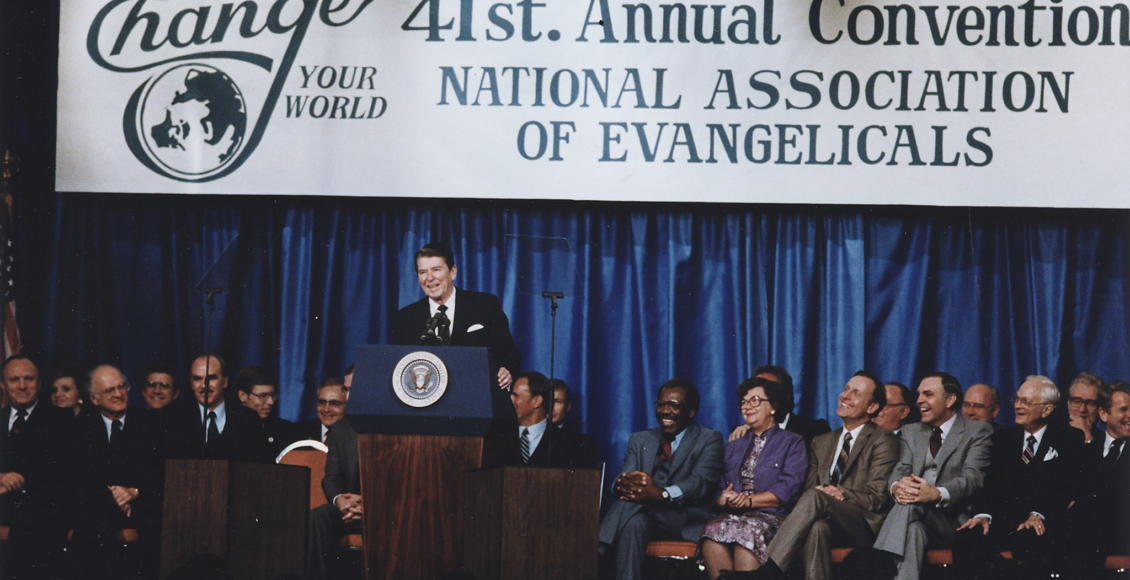 If the Confederacy had really died on April 9, 1865, the Republican Party would not be in power today. Although Robert E. Lee surrendered that day, the failure of Reconstruction by the late 1800s allowed the racial injustice that sustained the Confederacy to fester, poisoning American institutions. Today, this vengeful ghost of the Confederacy lurks in the White House and in the Capitol, whispering to Republican politicians who continue to forestall progress on racial justice. But racism is not simply a partisan issue: it is an American issue. It is a phantom that has infested many political parties throughout American history, from the pre-Civil Rights era Democrats to the Southern Strategy Republicans. Most recently, after the realignment of constituencies during the 1960s, the party of Lincoln (the GOP or Republican Party) became the party that capitalized on that racism to achieve its political ends.

White evangelical Christians, driven by an end-justifies-the means imperative to enforce their fundamentalist moral views over the entire country, have turned the Republican Party into the Confederate spectre’s new host. Of course, evangelical Christianity encompasses several denominations; however, certain sects — such as Southern Baptists — have transformed evangelicalism into a political movement, tethered to the Republican Party and fundamentalist policy positions. With their support, the Republicans have furthered a destructive agenda of corporate supremacy; undemocratic voter suppression; and environmental deregulation. This ongoing relationship between party and sect, birthed in racism and empowered by religious fundamentalism, has eroded American democracy for decades and continues today.

During the 1960s, the successive victories of the Civil Rights Movement agitated southern white evangelicals, who invoked religious liberty to mask their racist motivations. Consider their reaction to the Supreme Court’s 1954 decision in Brown v. Board of Education. The decision outlawed segregation in schools, prompting evangelicals to open private, all-white religious schools, insidiously circumventing desegregation under the auspices of religious self-determination. Although these efforts were later stymied, evangelical leaders also invoked religious liberty in their crusade against the Voting Rights Act and social welfare programs that predominantly benefited communities of colour.

Because newly enfranchised African Americans had begun to vote in large numbers for the Democratic Party and its civil rights agenda, white evangelical leaders like Revs. Jerry Fallwell Sr. and Paul Weyrich condemned it vehemently. In their view, President Lyndon B. Johnson’s Democratic administration had violated local autonomy and supplanted white evangelical Christians with African Americans and Latinos. Naturally, their racist tendencies were one factor, but they also feared that Democratic civil rights initiatives would undermine tenets of their religious ideology. So they turned to the Republicans instead.

The resulting mixture of bigotry and evangelical Christian ideology became the Republicans’ greatest asset, stirred into the vitriolic stew that became Richard Nixon’s “Southern Strategy” in the 1968 general election. Although former Alabama Governor George Wallace (of “segregation today, segregation tomorrow, segregation forever” fame) was the first to press this strategy into service in his own bid to win over working-class whites four years before, Nixon turned racial prejudice into a long-term and distinctly Republican investment. In the words of Kevin Phillips, one of Nixon’s strategists, “the more Negroes who register as Democrats in the South, the sooner the Negrophobe whites will quit the Democrats and become Republicans.”

Republicans like to call Lincoln the father of the Republican Party, but it was really Nixon and this deeply racist strategy that gave rise to its modern incarnation. Phillips’ words were no less than the modern party’s baptismal sermon, cheered on by evangelical onlookers. Today, this racist origin story is often buried in endless debates about abortion and the Second Amendment—legitimate issues of policy that are more socially acceptable. But that is exactly the trick the Republicans pulled.

To win over more moderate conservatives, party officials employed a “tempered conservatism” and advised campaigners to steer away from “extremist” language that was overtly racist. For instance, they often decried “big government” as a euphemism for social programs intended predominantly to help minorities. Winning Republican converts outside of the South required this more tempered conservatism, accommodating Christians who supported anti-abortion legislation but were not racist, and likewise, conservatives who were neither vehemently racist nor religious zealots. Nevertheless, the idea was avowedly to consolidate the greatest number of white ethnic prejudices, including racism, without sabotaging the existing coalition. As a result, racist bigotry was thrust into the cement with religious conservatism, forming the foundation of today’s monolithic Republican Party. As the political chasm widened, the Republican Party became the only party for theologically conservative Christians and political conservatives, while the Democratic Party was characterized as the party of “big government” and minorities of color. In time, white evangelicals came to almost exclusively identify as Republicans.

All of that took time, but by breathing new life into the Confederate spectre by shrouding it in evangelical purity, Nixon sealed the Republican Party’s fate. It didn’t matter that Nixon was tainted by the Watergate scandal of 1972, because Jimmy Carter initially seemed to be evangelicals’ saving grace. But his liberalism quickly incurred their rancor. And it was not a matter of impiety — a “born again” Southern Baptist, he practically preached his way into the White House. It was the fact that he preached a liberal Christianity of respect for the environment and thy neighbour, championing civil rights. Because this jeopardized fundamentalist interests and contributed to further African-American empowerment, televangelists such as Falwell and Weyrich incited evangelicals to demand someone more ideologically conservative — someone who would combat the era’s multiple civil rights movements, from abortion legalization to equal rights legislation.

Their saviour, it turned out, was not Jimmy Carter but Ronald Reagan. And he was ushered into office by Rev. Jerry Falwell’s “Moral Majority” coalition, which was founded in response to Carter’s shortcomings and religious leaders’ growing fears that conservative theological positions were becoming a casualty of the Civil Rights Movement. Established in 1979, the coalition consolidated Christian theological conservatives, who set aside divergent theological creeds in order to fulfill shared political ends. These included reprobating the government’s support for LGBTQ people; overturning the 1973 Supreme Court decision in Roe v. Wade, which legalized abortions; and curbing the mass enfranchisement of African Americans, who voted Democratic and thereby enabled the liberal policies of Democratic politicians. With the weight of the Moral Majority behind him, Reagan’s Republican Party scored victory in 1980. Of course, his fear-mongering about communism, support for libertarian notions of states’ rights, and other classic conservative ideas proved decisive. But it was evangelicals’ disappointment in Carter’s liberalism, and their resentment of the Civil Rights Movement and the movements in its wake, that drove them to the polls.

Fast forward forty years, and it becomes a foregone conclusion that the consequences were disastrous for American democracy. Reagan shredded labour unions, enabled environmental deregulation, and slashed taxes on the wealthy. Subsequent Republican leaders, from the Bushes to Trump, hacked away at American civil liberties, continued gutting taxes on the wealthiest Americans, and strengthened the corporate chokehold over the US—and by extension, the world. The Supreme Court’s 2010 decision in Citizens United v. FEC, which allows corporations to donate vast sums of money to political campaigns, is arguably a consequence of evangelical support for the Republican Party, because they, with the support of their evangelical base, were able to stack the Supreme Court with the right-leaning justices who found in favour of the plaintiff. As a result of this and other measures enacted by the Republicans over the decades, US politics is now rife with corruption, contaminated with “big money,” and as a result, increasingly influenced by powerful donors and corporate interests.

Although the broader Republican Party is largely to blame for these travesties, they would not have come to power without operating as a vehicle for white evangelical interests. What happened in 2016 is a case in point: white evangelical Christian voters turned out at a stunning rate of 81 per cent, pushing Trump over the edge to victory in many battleground states. Considering that the president is infamous for his shameless boasts of grabbing women’s genitalia, alleged adultery, and his history of callous worker exploitation —demonstrably unchristian behaviour — the cynicism underlying the evangelical-Republican axis has never been more obvious. With the support of evangelicals, the Republican Party now threatens democracy itself. Meanwhile, to keep returning the favour, they have delivered on their campaign promises to these same voters, packing the courts with racist fundamentalists who promise to scrap Roe v. Wade, restrict LGBTQ+ freedoms, fuel anti-science agendas, and fulfill other conservative religious priorities. At the same time, racial minorities continue to be held down, not just because they support Democratic initiatives but also because of outright racism that is empowered by the Republican coalition.

In the end, then, the “Moral Majority” really became a majority — or if not an actual majority, a minority propped up by the broader Republican Party, shameless voter suppression, and the Electoral College. Considering that racism descending from the  Confederacy drove the Moral Majority and others to support the Republican Party, and that their support was instrumental in the Republican Party’s success, it stands to reason that the Republicans’ grip over American politics is the residue of the Confederacy in itself. After all, it was the failure of Reconstruction by the 1880s that led to generations of racial apartheid, delaying desegregation until the 1960s and allowing racism to sink even deeper into the American social fabric. Nixon and later Republicans exploited these lingering grievances, rendering evangelicals complicit in the excesses of the Republican Party they helped elect.

America’s real cross to bear is not in restricting access to legal abortions or curtailing LGBTQ+ rights, it is in the task of exorcising the last, racist vestiges of the Confederacy that gave us today’s Republican Party and Trump’s audacious authoritarianism.

Featured Image: “Photograph of President Reagan Addressing the Annual Convention of the National Association of Evangelicals” is from the US National Archives and is in the public domain.