Orban: The New Preacher of Illiberal Democracy in Hungary 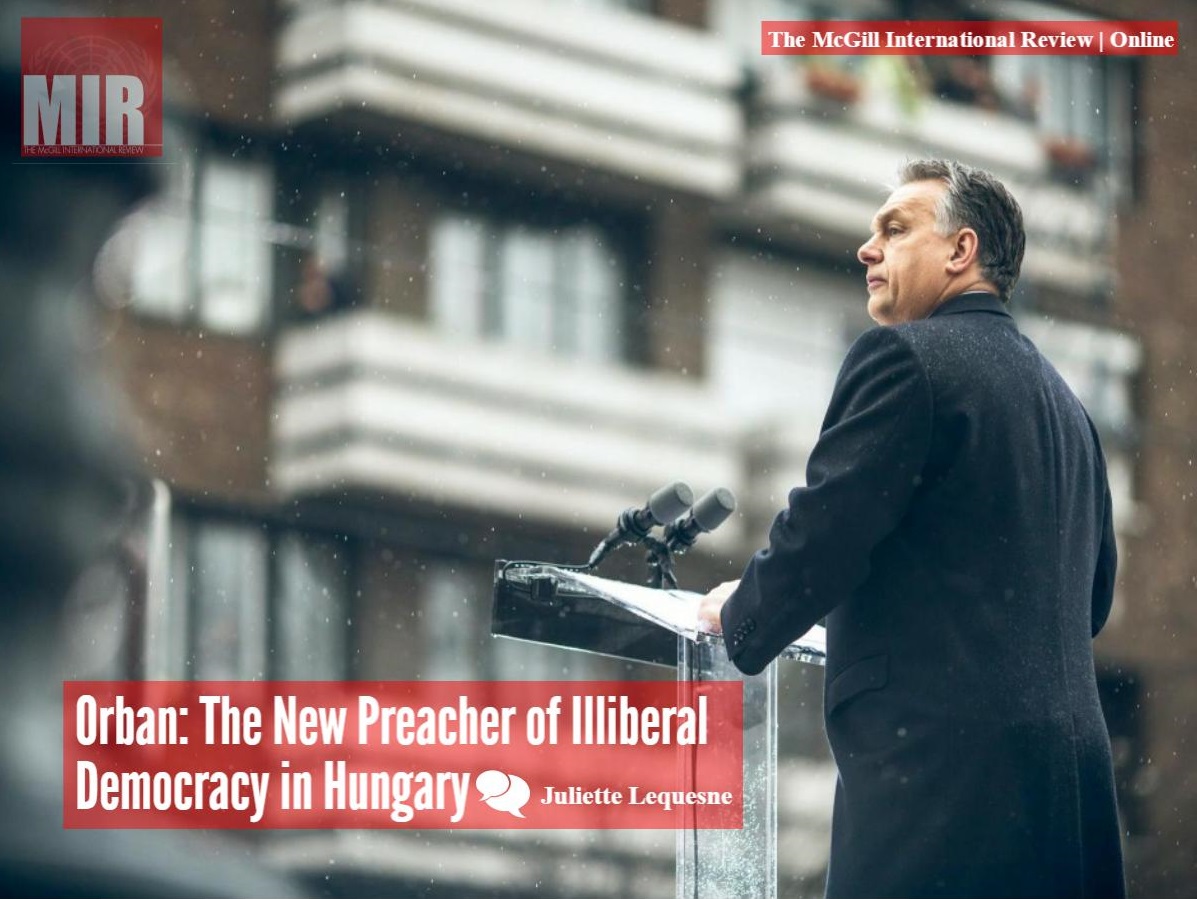 Anyone following Central European politics over the last decade has witnessed the success of populist parties and the weakening of well-established democratic principles. In Hungary, the right-wing Prime Minister Viktor Orban and his party, Fidesz, have been stealing the political stage for the last 15 years and dominating the political process. The recent closure of the independent newspaper “Nepszabadsag” and the constitutional changes following the “migrant referendum” prove that Orban will continue to seek the support of Hungarian public opinion and upset Europe in the process.

It has been 25 years since the end of Communism and 12 years since Hungary joined the European Union, but the euphoria of the newly liberal state seems to be over. Orban himself refers to Hungary as an “illiberal state” based on nationalist principles. Hungary is considered as the first country of the Eastern Bloc to have stood against the Soviet Union in 1956. The revolution was crushed but something remained: the hope that one day Hungary would free itself from Soviet hegemony and establish democracy.
This aspiration finally came true in 1989. One sometimes forgets how young Viktor Orban played a key role in Hungary’s transition from communism to liberal democracy. In June 1989, during a ceremony honouring 1956 martyr

Imre Nagy, Orban delivered a memorable speech when he called for the withdrawal of Soviets from Hungary and for freedom. Many Hungarians admired his courage, yet it also foreshadowed his role as the populist leader; already, he was using the nationalist rhetoric that would propel his rise to  be the head of the country a decade after.
So what happened to the young politician seeking liberal reforms?

In 1988, Orban, along with other young democrats, created the Alliance of Democrats (Fiatal Demokraták Szövetsége), better known as Fidesz. The party was meant to be anti-communist and quickly gained popularity among the new Hungarian generation. In Hungary’s first elections following the fall of communism, the party won enough seats to become the 5th largest in parliament. Despite losing the 2002 elections the party held on and its popularity grew. The young democracy needed to be reassured with nationalist speeches. Fidesz promised economic and social reforms and to provide Hungarian households with benefits, yet solid economic performance and quick consolidation of democracy resulted in rapid and ever-growing backsliding. Viktor Orban turned the Hungarian democracy into a particracy.

The Hungarian Constitutional Court was hailed as a great triumph in constraining the power of the government during the 1990s and had become both a very powerful and democratic internal court in Europe. In 2010, however, Orban returned to power and severely curtailed the power of the Constitutional Court, limiting its ability to act as a check on his legislation.
Fidesz reformed the judicial system, forcing judges into early retirement. The party filled the quotas with their allies, essentially violating informal rules and norms. The Parliament size was cut in half, which redrew the constituencies so that the rural seats (Fidesz electorate) were more valuable than the urban seats.
Last week, the government shut down Hungary’s largest opposition newspaper “Nepszabadsag”. The newspaper website was taken down and journalists’ emails account blocked. The newspaper was critical towards Fidesz and its leaders, and today “the number of journalists willing to expose corruption dwindles, especially outside the safety of the internet”. This was not the first time the government decided to shut down a newspaper, as Orban previously introduced a media council to impose fines on outlets.
Threats to freedom of the press, control over the judicial system, and centralization of the party contribute to the deterioration of democratic principles. Orban’s practices are not overly authoritarian, but he manages to use tactics that make him and his party indispensable.

Recently, Hungary also made the headlines after the party scheduled a referendum on whether Hungary should accept the European Union’s plan to resettle refugees there. Orban’s popularity has grown thanks to his handling of

the migrant crisis. Employing nationalist rhetoric, he is convinced that he is saving European civilization against Islamic threat and plays on historic fears: one should not forget that the Ottoman Empire occupied Hungary during the 16th and 17th century. And Orban is not alone anymore within Visegrad countries. Robert Fico, PM of Slovakia, the PiS government in Poland and even the Czech President Milos Zeman are of one mind concerning the threat against Europe. On October 2nd, the referendum question was phrased in a way that left little doubt as for the outcome of the result–“Do you want the European Union to be able to order the mandatory settlement of non-Hungarian citizens in Hungary without parliament’s consent?”. 98% of voters had chosen to refuse the EU quotas of refugees, but the turnout was 43%, below the 50% required for a referendum to be considered valid. This could be regarded as a small victory for the opposition, who invited people not to vote. However, it also allowed Viktor Orban to come up with a new set of constitutional changes that will prevent the EU from imposing rules on Hungary.

After 20 years when Central Europe tried to “catch up” with the West and “return to Europe,” Orban explicitly claimed that central European countries should not make the same mistakes as Western Europe concerning multiculturalism. Western leaders have their own share of responsibility, as when German Chancellor Merkel and former British Prime Minister Cameron both estimated that multiculturalism was a failure in their countries. The use of nationalist rhetoric and history is key to Orban’s popularity in Hungary as it is in general in Central Europe and the Balkans. Leaders are not able to envisage the present without looking at the past, and many claim that they have been victims of the past. In the case of Hungary, the big shock was the Trianon Treaty of 1920, which reduced the territory of Hungary to what it is now. Orban always stressed that it was an unfair treaty, and has used nationalist discourse to appeal to Hungarian who, due to Trianon, are now living in Romania, Serbia and Slovakia (10% of their combined populations).

The “illiberal state” that Orban and his party have created will continue to rally domestic support, threatening more and more democratic principles. Orban’s claim “that our European Union membership precludes us from building an illiberal new state based on national foundations” speaks to a growing anti-elite sentiment and the belief that the European Union has lost its legitimacy, and you do not have to go far to find another example. Poland’s new government endorses the same populist speeches and recently attacked the constitutional court. Fidesz faces few challengers in Hungary besides the far-right party Jobbik. The next Hungarian elections are scheduled in 2018. There is no doubt that Orban will run for a 4th mandate.