#OscarsSoPolitical: A Brief History of the Academy Awards Ceremony as a Stage for Political Protest 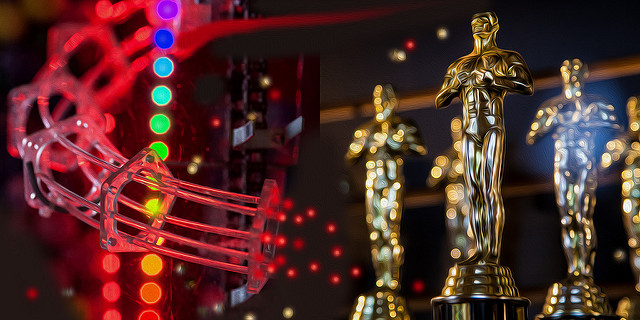 Up until 1973, the annual Academy Awards ceremony, where the Oscars are presented to the most talented of the movie industry, was mainly just that: an awards ceremony for glamorous people living in the bubble of wealth and fame. Then everything changed that year when legendary actor Marlon Brando refused his Oscar for Best Performance by an Actor in a Leading Role for his iconic depiction of mafia boss and family man Vito Corleone in the movie The Godfather.

Corleone is considered Brando’s most famous role, and has become an enduring figure in pop culture. At the time he staged his protest, Brando didn’t know the cultural impact that his performance would leave. However, he knew he was a favourite for the Oscar and decided to make a statement inspired by his activism with the American Indian Movement. Instead of showing up to the ceremony, he sent Native American civil rights activist and actress Sacheen Littlefeather, dressed in full Apache attire, to refuse the award and read a statement condemning “the treatment of American Indians today by the film industry.” Backstage, Littlefeather was warned not to read the full 15-page statement prepared from Brando, and so once on stage, she improvised a one minute speech explaining Brando’s reasons for refusing the award. In the audience, there was a loud mix of boos and cheers. Later, Littlefeather read the whole statement. In the end, the actor has succeeded in getting his message across and, in the process, forever tainted the apolitical atmosphere of the ceremony.

Ever since, the Oscars ceremony was used by celebrities and movie stars to unleash their political personas. Every time, the public would react in a mix of condemnation and praise. For some, celebrities are a group of privileged and out of touch people who should not exploit their prominence to impose their ideas on ordinary citizens. Others point out that celebrities do have an impact in advancing many just issues, from civil rights to climate change. While Hollywood prides itself of being open and liberal, its politics are not always accepted. More often than not, Oscars’ night political statements become riddled with controversy. In 1978, actress Vanessa Redgrave provoked another controversy when accepting the Oscar for Best Supporting Actress in the movie Julia. For context, earlier during the year, Redgrave produced and narrated a documentary entitled The Palestinian, in which she defended actions by the Palestinian Liberation Organization. The Jewish Defense League criticized the Academy in response to her nomination. Upon receiving the award, Redgrave congratulated the Academy for not succumbing to “Zionist hoodlums.” The audience was still in shock, when screenwriter Paddy Chayefsky went on stage and addressed the actress saying: ”I am sick and tired of people exploiting the Academy Awards for the propagation of their own personal political propaganda. I would like to suggest to Ms. Redgrave that her winning an Academy Award is not a pivotal moment in history, does not require a proclamation, and a simple ‘thank you’ would have sufficed.” Years later, in 1993, while presenting an award, actress Susan Sarandon and actor Tim Robbins condemned the US government for what they called a stigma against people with HIV. Both actors known for their left leaning activism had been warned not to speak politics, but they chose to ignore the warning. As a result, the producer of the Oscars has banned them from presenting again.

Sometimes, the message is more of a call for positive action than a condemnation of policy. For example, in 2015, after playing a divorced mom struggling with her relationships and the upbringing of her children in Boyhood, Patricia Arquette accepted the Oscar for Best Supporting Actress. Her speech called for gender equality and for the elimination of the gender pay gap, not only in Hollywood but for every job in the country, and was widely lauded for its progressiveness.

This was all great, until controversies caught up with the Oscars’ institution. The 88th and 89th ceremonies in 2016 and 2017 respectively, not only were Oscars hosts, presenters and recipients more politically vocal, but the institution and its process both came under fire for their own politics.

Last year’s Oscars are overwhelmingly remembered for the hashtag #OscarsSoWhite, as the lack of diversity in the nominees’ group shocked many in the movie industry and beyond. The most upsetting for critics of the selection of nominees was the exclusion of Straight Outta Compton, a movie about the rap group N.W.A for Best Picture. A number of celebrities, of all races, as well as former President Barack Obama, expressed their disappointment in the lack of diversity in the nominations. Several celebrities boycotted the ceremony. Many expressed criticism towards the relevance of the Academy Awards and so far its esteemed position in the movie industry and culture. Why were so many presenters minorities, but a shocking majority of the nominees and winners white? During a conversation between NYTimes chief film critics before the 2017 ceremony, A. O. Scott argued that disappointment is the norm with the Oscars, as it is a typical Hollywood glam show. However, he added, “every once in awhile — whether out of honesty, coincidence or a bizarre outbreak of good taste — those pasty old members make a choice that reflects both the state of the art and the reality of the culture.” It seems that this  finally happened in 2017.

Four out of the nine Best Picture nominees revolved around characters of colour (Lion, Moonlight, Hidden Figures, Fences). Six black actors received nominations, a record in Oscar history with more than three black nominees (actors and non actors) winning an award, another record. Mahershala Ali, for his role as Juan in Moonlight,  became the first Muslim actor to win an Oscar. By honouring Viola Davis with the Best Supporting Actress award, she became the first black woman to win an Oscar, Tony and Emmy. Most importantly, Moonlight, about an African-American boy growing up in a difficult Miami neighbourhood, won Best Picture.

So what happened?  One could think that the increased diversity was a response to the current political climate in the US and the rise of “alt-right nationalism.” There is maybe a less dramatic explanation: Recognizing last year’s #OscarsSoWhite catastrophe, the president of the Academy, Cheryl Boone Isaacs, fought (and won) to change membership rules. She invited more women and minorities to join the voting board (though the majority remains male and white). Again, the ceremony did not lack political statements. The most striking came from Mexican actor Gael Garcia Bernal, who spoke out against building a wall along the Mexican border while noting that all in the movie industry are “migrant workers.” As well, in a statement read on his behalf, Iranian director Asghar Farhadi, winner of Best Foreign Film for The Salesman, described President Donald Trump’s now stalled travel ban as “disrespectful and inhumane.”

The Best Picture gaffe at the end of this year’s ceremony seemed a perfect ending for the diversity controversy. In the alternate universe where Moonlight would have been announced as the winner of Best Picture when it was truly La La Land that really won, it would have a cruel joke. While La La Land is a charming movie about a white couple struggling to make it in Hollywood, Moonlight is a first for the Oscars on so many levels: an astonishing low budget (1.6M$ versus 30M$ for La La Land), the first award for a Muslim actor, an LGBT story with African-American protagonists, and the first Best Picture for a movie directed by an African-American.

This year’s reversal gives hopes to other still underrepresented minorities in the Oscars. Lin Manuel-Miranda was the only Hispanic nominee of the night. As well, only 20% of non-actor nominees were female, sparking the #OscarsSoMale hashtag, which has yet to generate as much talk as #OscarsSoWhite. What will be next year’s hashtag? With the current political climate in the United States, bets are still open.