Our Fascination with Alexandria Ocasio-Cortez 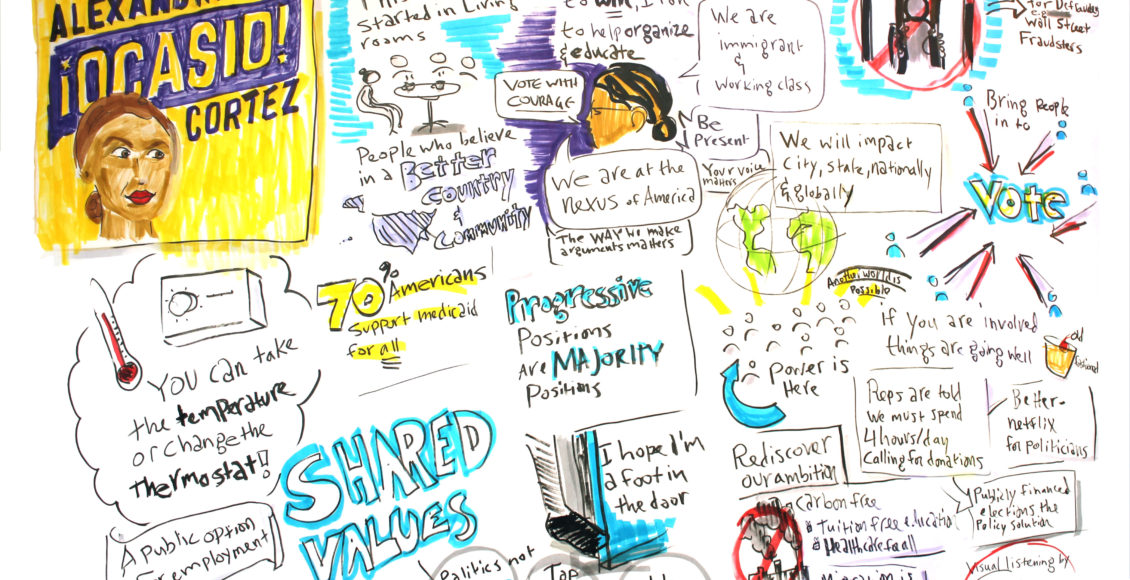 On June 28th, 2018, Alexandria Ocasio-Cortez was elected to the US House of Representatives for New York’s 14th district at only 29 years old, beating out her primary opponent, the ten-term incumbent Joe Crowley. At the time, a mere eight months ago, the name “Ocasio-Cortez” was largely unknown outside of her district, let alone in the US or around the world. Then, all of a sudden, within weeks of the general election in November, Ocasio-Cortez began dominating every news outlet, every day, all the time, whether it be Fox News or CNN. Her debut speech in Congress in January became the most watched C-Span video in history. Just days ago, footage from a hearing by the Oversight committee, in which Ocasio-Cortez unravels the problems with campaign financing in the US, immediately went viral. The coverage around Ocasio-Cortez by international media outlets, such as the BBC or France’s Le Monde, shows that the media fury around her is not limited to the United States.

Ocasio-Cortez, a Latina of Puerto Rican heritage, is just one of the many diverse faces that joined Congress in 2018: alongside her are the first Native American women ever elected to Congress, Deb Haaland and Sharice Davids (who also identifies as lesbian); Ilhan Omar and Rashida Tlaib were the first Muslim women elected to Congress. Yet, despite this range of diverse, progressive Congresswomen, Democrats and Republicans alike seem fixated solely on Ocasio-Cortez. Republicans label her “socialist” policies as a threat to the US, while older Democrats campaigning for the 2020 election seem to use her as the model for the progressive agenda they should adopt in their platform. At only 29 (six years too young to run for president), and with only a few months in office, she has already made herself one of the most important and influential names in Washington. With this spotlight, she has almost no room to make mistakes, calling into question her chances of lasting long-term or of even running for her party’s leadership—or perhaps one day being president.

Ocasio-Cortez is the quintessential millennial politician. At 29, she is the youngest woman to ever serve in Congress. Before beginning her campaign, she was a bartender in New York; now, she makes headlines on the daily. Her experience in politics was limited: she worked on immigration policies with Senator Ted Kennedy and was an organizer for Senator Bernie Sanders’ 2016 race. Like Sanders, she built her campaign on grassroots activism, progressive policies, and the fact that she was a political outsider and underdog. Few expected her to win—especially her opponent Crowley, who did not even show up to their scheduled debates. Traditional media outlets such as The New York Times did not report on her campaign or write a profile. Instead, in true millennial fashion, Ocasio-Cortez reached out to online publications such as Elite and Refinery29, which target young women.

Furthermore, she capitalized on branding, showing her district from the start that she was not afraid to take on the “establishment”. Her bilingual posters—which used bright and dramatic colours (straying from the traditional red, white and blue) and included Spanish exclamation points on her last name—altogether exemplified Ocasio-Cortez’s youth, background, and her revolutionary approach to campaigning and politics.

Ocasio-Cortez’s unique success, compared to her fellow freshmen in Congress, comes from her authenticity, transparency, and accessibility. Her active use of social media shows an eagerness to reach out to youth and to fellow millennials. Through her Instagram Live stories, she lets the world enter her life, proving that she is not different from the rest of us: one odd night, during an Instagram Live Q&A, she detailed her skin care regimen to followers. She answers questions on Instagram while preparing Instant Noodles for dinner, gives tours of Congress and her office, or showcases a regular night at home. Her active online presence and following seem to fascinate Democrats all over the country; for this reason, in January, the Congresswoman gave a seminar on how to use Twitter for her fellow House Democrats.

In the 2016 Democratic primary, Hillary Clinton struggled to win over the support of millennials. No matter how hard she and her team tried, for millennials, Clinton was too close to the establishment and her efforts to be “hip” appeared inauthentic. Polls showed how even third-party candidates, such as Jill Stein or Gary Johnson, were favoured over Clinton, 44 percent to 31 percent, among the 18-34 voter group. Winning over millennial voters doesn’t just have to do with age: Sanders, six years older than Clinton, was by far the preferred presidential candidate in the 2016 primaries among the 18-34 age group, receiving about 29 percent more votes among those under 30 than both Trump and Clinton combined. While their politics are equally progressive, Ocasio-Cortez’s youth, her diversity, and her masterful use of social media give her an advantage over Sanders.

The idea of “democratic socialism” took off in the US with Sanders’s small-donor-financed presidential campaign in 2015-16. Running next to Democratic staple Hillary Clinton, Sanders and his policies appeared extreme. He ran on an extremely progressive platform, advocating for Medicare For All, a $15 minimum wage, tuition-free and debt-free college, affordable housing, and pro-women and pro-LGBT policies. Sanders’ unexpectedly successful campaign allowed for the development of the new self-described progressive Democratic party, including the rise of Ocasio-Cortez. In 2019, Sanders’ ideas are no longer radical but are becoming the norm: Senators and 2020 presidential candidates Kamala Harris, Cory Booker, Elizabeth Warren, and Kirsten Gillibrand have all included Medicare For All in their platforms. After Ocasio-Cortez became the first politician to fully embrace the conversation about abolishing ICE (Immigration and Customs Enforcement), Gillibrand and Warren quickly followed suit, including the replacement of ICE in their platforms.

Loyal to Sanders’ legacy, Ocasio-Cortez is unafraid of pushing the envelope with her progressive ideas. In November 2018, she, alongside Sanders, began campaigning for the Green New Deal—a plan considered “radical”, since it aims to completely wean the country off of fossil fuels and invest in clean-energy companies and programs. A group of climate change activists, joined by Ocasio-Cortez, protested outside of House Speaker and Democratic leader Nancy Pelosi’s office to demand the establishment of a completely new committee, that would emphasize the decarbonization of the US economy and whose members would not have received donations from the fossil fuel industry. Pelosi, by contrast, would rather restore a previously-existing, less ambitious body. This example alone may explain the fascination with the Congresswoman. Even more so than Sanders, Ocasio-Cortez seems like the perfect intra-party antagonist to Pelosi. It is clear that Ocasio-Cortez represents the future of the Democratic party—she is young, diverse, anti-establishment, and is far further to the left than the Speaker, in a party that increasingly tilts in these directions: a record number of women, people of colour, LGBTQ+, and young Democrats have entered the House of Representatives, while 70 percent of Americans now support Medicare for All, compared to only 54 percent approving of Obamacare. On the other hand, Pelosi is emblematic of Bill Clinton’s conventional Democratic party, which tends to stick to the centre of the American political spectrum. The question of health care exemplifies the antagonism between the two: while Ocasio-Cortez and the progressive wing of the party are intensely campaigning for Medicare For All, Pelosi advocates for the less radical Medicare “buy-in” plan.

Climate change and health care are only some of the battles in which Ocasio-Cortez is engaging. Ever since her swearing-in, she has come out in favour of a 70 percent top marginal tax rate, which would tax 70 percent of every dollar earned beyond 10 million per year. Currently, the top rate is only taxed 37 percent. Ocasio-Cortez also introduced the Paycheck Fairness Act, which aims to close the wage gap between men and women.

In 2016, Bernie Sanders’s “socialism” terrified the right. Socialism has always been a dirty word in the US, recalling the USSR, its Cold War foe. Yet, ever since the financial crisis of 2008, socialism—in the American sense—is becoming more popular among youth. A Gallup poll in August 2018 showed that millennials in the US have a much more positive view of socialism than the other age groups. Because of Sanders and now Ocasio-Cortez, democratic socialism has the chance to expand in the US, threatening the neoliberal capitalist structure the Republicans so dearly value.

Ocasio-Cortez has already proven herself in DC: her desire to be loud and to be heard has propelled her to the forefront of media coverage and of the Democratic party, becoming the Republicans’ new favourite enemy and the Democrats’ new troublemaker. For instance, the Republican-leaning channel, Fox News, has time and time again spoken about her in their news segments, whether it be talking about her choice of shoes, apartment, or qualifying her as a socialist danger for America. Fox News is so obsessed with Ocasio-Cortez that satirical newspaper The Onion suggested that they begin 24-hour coverage solely dedicated to her.

Given this spotlight on her, Ocasio-Cortez, a political freshman, faces enormous pressure to prove her worth and not make any calamitous mistakes. More than ever, politicians are subject to online scrutiny, due to constant news coverage and the widespread use of social media. It is in this new environment that Ocasio-Cortez is beginning her political career. If she were ever to run for president, reporters and online users would easily be able to find a video, a tweet, or an interview of hers that could be used against her. During an interview on PBS, Ocasio-Cortez spoke of Israeli “occupation” in the West Bank, then immediately retracted her comments, realising the political misstep she had just committed. The statement immediately sparked controversy online and will likely be utilised by her opponents in the future. As a guest on 60 minutes, Ocasio-Cortez stressed the importance of “morals” over facts. This position is extremely dangerous and plays directly into Trump’s “fake news” rhetoric. Her use of imprecise “facts” is a repeated offence: she once miscalculated the country’s unemployment rate in an interview and at another time, accused an Obama-administration economist on Twitter of being paid off after he fact-checked her.

It is important to recognise that Ocasio-Cortez is not a seasoned politician: politically, she is a novice and has much to learn. One cannot expect her to be perfect or to have the same level of expertise as Hillary Clinton or Bernie Sanders. At the same time, it is her responsibility to recognise her learning curve. The freshmen class of Democrats are the future of the party and of America. Trump’s election has completely shaken up US politics, through, for example, his outright embrace of authoritarian regimes and his use of Twitter for his personal vendettas. It is now the responsibility of this new class of Democrats to restore dignity and professionalism in politics. It is not by calling Trump bad words, as Rashida Tlaib famously did, or by favouring moral intentions to facts, that the Democrats will succeed.

Given the coverage and scrutiny Ocasio-Cortez currently faces, it is essential to question her viability in the long-run. She is every progressive’s dream (including mine), and her boldness is quickly pushing her party, and potentially US politics, to the left. Her party certainly has a lot to learn from her, such as the power of grassroots campaigning. However, they should also be weary of placing all their eggs in one basket. Ocasio-Cortez is young and has a long way to go before becoming leader of the party or president, and the new Democratic class offers many new and interesting faces. All while supporting and rooting for her, it is possible to recognise her mistakes and how she can still grow as a politician. Right now, the most important job for Ocasio-Cortez is to get her leftist agenda out into her party and into the country.