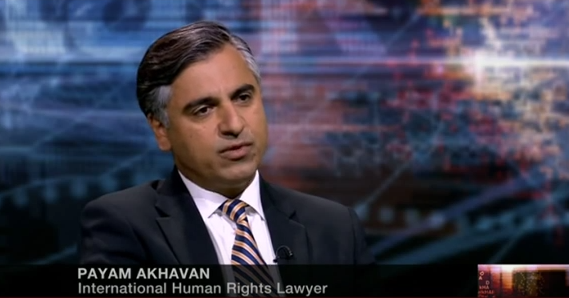 As far as McGill professors go, Professor of Law, Payam Akhavan is a pretty inspiring one. Mr. Ahkavan is a former UN Prosecutor at the Hague, investigated war crimes in the former-Yugoslavia, and holds a Doctor of the Science of Jurisprudence (SJD) from Harvard Law School. He has also served in the field in Bosnia, Croatia, Cambodia, Guatemala, Timor Leste, and Rwanda and has appeared before the International Criminal Court, International Court of Justice, Canadian Supreme Court, and the American Supreme Court.

This interview from BBC’s program Hard Talk isn’t new, but it is one of my favourites so I have chosen to share it here on this Wednesday evening.

Every time I have heard one of Professor Akhavan’s lecture’s he always talks about the importance of civil society and the bottom up nature that human rights must take if they are to become robust. In this interview, he speaks about civil society in Iran, where he was born.

I think these points about civil society providing the foundation for human rights are interesting ones. For anyone who has read my posts they’ll know that I often stress norms, which are often more effective when developed below than imposed from above. At the same time, the UN Declaration of Human Rights that was adopted in 1948 was almost entirely a top-down declaration by a group of elites from different states, gathered at the United Nations. In a previous article I have pointed to the discontent between what the UDHR states and what public opinion wants, even in places like Canada, but there are many examples where states are also loathe to follow the UDHR.

My point here is that maybe this says something about why the UDHR often provides such a flimsy justification for why states and individuals alike ought to obey the Declaration. Professor Akhavan may just be on the right track.