Impeachment is founded on the basis of objectivity by elected officials and focusses on the behaviour rather than the politics of the president in question. 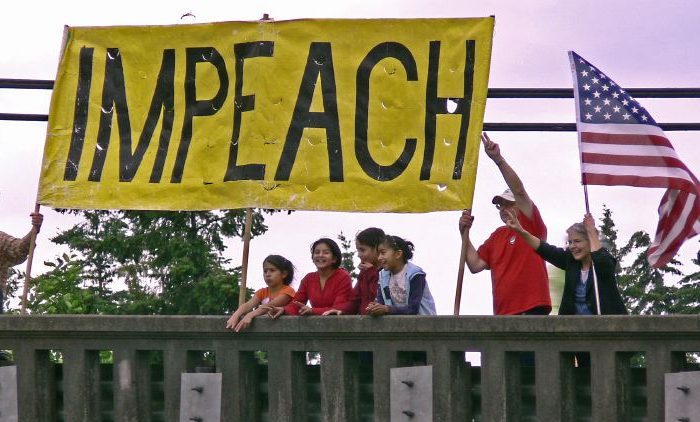 President Donald Trump has been criticized since he was first sworn into office in January 2017. Many of his critics within the Democratic party argue that, not only is he a new president with no experience, but he has nothing to bring to the table other than a complete lack of respect for the United States, its institutions, and well over half of its citizens. For the Republicans, however, it is a different story: one of support for the President, the man who prevented a 12-year Democratic reign in the White House and who defends most Republican values. However, the real question is, when it comes to an intentionally objective process such as impeachment, is it possible for politicians and government officials from both sides to put aside their partisanship in order to search for the truth and act accordingly?

Opposition between narratives is somewhat routine in politics, although the individual conduct of a President or any elected official is a whole other story. On September 24, 2019, House of Representatives Speaker Nancy Pelosi announced a formal impeachment inquiry against President Trump. This inquiry was launched, not on the grounds of political differences between the House majority and Trump, but on the basis of Trump’s conduct when interacting with the Ukrainian President in July 2019. While the line between politics and behaviour is so easily blurred, especially when the individual in question is the President of the United States, there is a distinction, and it is that very distinction upon which any impeachment case rests. Consider former President Bill Clinton’s impeachment proceedings. The investigation began because of his relationship with former White House Aid Monica Lewinsky, but only became a formal impeachment inquiry when he was accused of perjury, for which he was later impeached by the House of Representatives. In this instance, Clinton’s fulfilled his official duties as President by proposing and implementing various policies, but was impeached for his personal behaviour of lying under oath.

The issue with Trump’s personal conduct is that it is so closely intertwined with his policies, that the two have to be pulled apart layer by layer. It is certainly true that any candidate up for re-election might have political motivation to search for, or at least capitalize on, damning evidence of wrongdoing of a political opponent. Yet, in the case concerning Ukraine, Trump crossed a line, making his behaviour unconstitutional rather than simply politically-motivated. On July 18, Congress approved and finalized the provision of more military assistance to Ukraine, which is standard for a US ally. On July 25, Trump phoned Ukrainian President Volodymyr Zelensky, asking for information on Hunter Biden, Joe Biden’s son, and then followed up with Zelensky the following day. This request itself is not damning, however a week earlier Trump had frozen military aid to the Ukraine and, during the phone call, Trump implied that Ukraine would be rewarded for investigating Hunter Biden (the reward presumed to be a lift on the ban on military aid). Reflecting the understanding of most US officials involved, US Ambassador to the European Union, Gordon Sondland, verified that this was a quid-pro-quo (understood in this context to be bribery or extortion).

These actions are wrong on two levels: it is unconstitutional for a president to use their office for personal gain (i.e. Trump using his command of the US military to gain information for personal political use), and once a bill has been passed in Congress, there is no disputing it unless a president decides to veto the bill (which did not happen in this case). Because Trump’s reasoning for requesting information on Hunter Biden was for personal political gain in his re-election campaign, governmental resources and presidential powers cannot be used to acquire the information, especially when those resources have already been approved by Congress. Given this wrongdoing, although its severity may be disputed, the next step is to question whether the President’s actions rise to the level of an impeachable offense.

When the founding fathers established the principle of impeachment, it was for the purpose of “meaningful checks against a president disposed to tyranny.” According to Alexander Hamilton himself, impeachable offenses are “those which proceed from the misconduct of public men.” Thus, impeachment does not concern itself with the politics and policies of a president, but rather the individual conduct (or misconduct) of a president. Many argue that because the House and the Senate are two political bodies, and are in charge of the impeachment proceedings, there is no way to make impeachment apolitical. Hamilton even voiced this concern, expressing the danger that “real demonstrations of innocence or guilt” could easily become insignificant against the backdrop of political calculations. Yet, the distinct and separate nature of each branch of government in the constitution—executive, legislative, and judicial—was set up in such a way so that the branches work independently from one another and keep each other balanced in terms of their power. This means that the House and Senate are not only able to function impartially when it comes to the executive branch, but this is beneficial to them in order to keep the power of each branch of government in check. As Hamilton puts it, “Senators [are] ‘unawed and uninfluenced’ by the passions of the day.”

People can argue all day over their interpretation of behaviour and policies put forth by a president, but the subjective debate ends as soon as the president does not follow their duties according to the Constitution. When Nancy Pelosi announced Trump’s impeachment inquiry, she stated that “flagrant disregard for the law cannot stand.” However, the issue goes further than that; while Nixon’s near-impeachment is obvious evidence of illegal activity, presidents do not need to break the law to be impeached. Rather, there must simply be evidence that the president abused his power and failed to satisfy his role under the constitution.

In an age where even one’s preference for tea over coffee seems to indicate a political leaning, there is the question of whether an objective impeachment trial is even possible. Hamilton perhaps did not predict the degree to which his concern would ring true in our society. Personal identity today is so closely tied to political leaning that it seems almost as if public and private individuals put their party above all else. Decisions by Republicans and Democrats are made for the sole purpose of preserving their party’s reputation and core values. While legally Hunter Biden’s actions have no bearing on Trump’s impeachment, politically, “the two are linked because they give Republican senators [who are] minded to defend Mr. Trump a handy set of talking points.”

Republicans argue that, although there is evidence of wrongdoing in the phone call between Trump and Zelensky, this does not rise to the level of an impeachable offense. Why, one may ask, do the Republicans still maintain this stance when the evidence so far points overwhelmingly to Trump’s abuse of power? The subjectivity of politics means that people justify objectively unconstitutional behaviour because the end goal aligns with their party politics. Because a president’s behaviour does not need to be illegal in order to be impeached, the question of objectivity becomes even more difficult to grasp. As a result, it is much easier for Republicans to defend Trump in the name of the subjectivity of his actions, when in reality, this defense is simply a political move.

This dynamic can be seen through the lens of both parties. The Democrats held off on beginning impeachment proceedings in order to preserve their public image. Moderates have argued that the Democrats could have easily looked self-indulgent by pursuing impeachment rather than focussing on fixing public service and societal problems in America. Yet, the main reason Pelosi did not start impeachment proceedings before September 24 was that she and other moderates felt certain that impeachment would not be approved by the Senate, and it was this decision which progressives in the party argue was self-serving. If you ask most Americans, they are sure that the outcome of the impeachment trial will affect the 2020 elections. Many argue that this is why the Democrats waited so long to begin impeachment proceedings; they are at risk of appearing weak as they gear up for next year’s election if impeachment is not understood by the public and is not approved by the Senate. Considering the long wait and negative implications of an unapproved impeachment attempt, there is no doubt now that the Democrats will do everything in their power to impeach and remove Donald Trump from office.

With so much riding on the results of this inquiry, it is no wonder that officials are making political decisions rather than objective ones. Public opinion of a party is important even in the best of times, but the 2020 election is nearing, making political convictions almost impossible to ignore when making a decision. As stated in the Economist, “it remains to be seen whether members of Congress’s upper chamber will put party aside and live up to Hamilton’s billing,” but this shouldn’t really be a question we have to ask. As the House of Representatives begins drafting articles of impeachment against Trump, the main question is whether Trump abused his power while in office. This is question concerns only the objective behaviour of an individual, albeit an individual with immense power and an intense political following, but nevertheless, an individual. With this recent action by the House, it certainly seems as if the evidence points to unconstitutional behaviour and an abuse of power by Trump. One thing is for certain: the importance of this question cannot be understated as the answer will set a precedent for presidents for years to come.

The featured image “Impeach” by Eddie McHugh is licensed under CC BY 2.0.