Police Militarization and the Green to Blue Pipeline in America 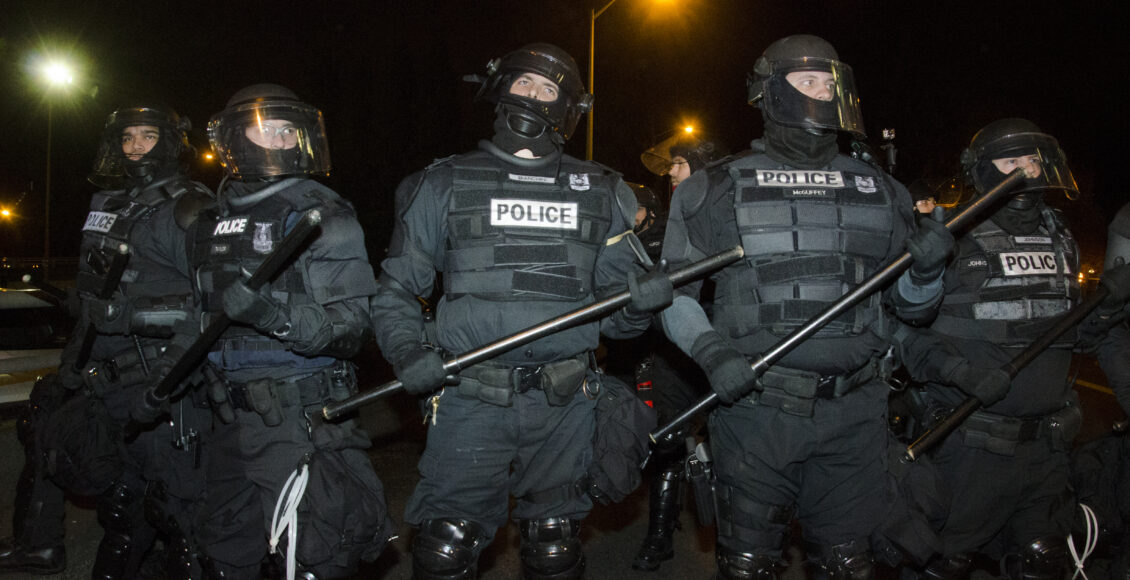 Police respond to unrest in Ferguson, Missouri after the death of Michael Brown. "The intimidation police are here" by Reylinn McGrath is licensed under CC BY-NC 2.0.
Share

The militarization of police equipment in the US

The increasing militarization of police equipment has been a notable trend in the US for many years now. Taser shields, with the capacity to deliver 320 volts, were brought to a small Breonna Taylor protest in Memphis, Tennessee as a preemptive measure to intimidate protesters. Although Shelby County Sheriff Floyd stated that it was a “regrettable mistake,” people were noticeably nonplussed at the presence of such a weapon to a peaceful protest.

Taser shields are just the tip of the iceberg when it comes to police forces increasingly mimicking the military. Badges without Borders by Stuart Schrader puts forth the notion that the professionalization of policing allowed police departments to receive better equipment, more refined uniforms and training manuals. Schrader argues that this, in turn, allowed police forces to start mirroring the discipline and uniformity of the military, thereby kick-starting a professionalized policing force with the potential of using technologies of war on American citizens.

Of course, the deployment of military-grade weapons against protesters is not new. In fact,  “the use of military-grade weapons against protesters in the United States has grown swiftly in the last three decades,” a part of a disquieting culture of hyperviolence within law enforcement, and has not made people feel safe. It has resulted in more people being killed, with this trend also contributing to a particularly insidious, “paramilitary” ethos that “emphasizes the use of force, discretion from authority and mistrust of protesters.”

This is an alarming trend and should be considered an urgent issue: according to Benjamin Kenzer, there is “research to suggest that when police receive military training, or train alongside the military, they can be socialized into a militarized, warrior-like mindset.” As we see images and videos of police holding weapons used in war zones, we must ask ourselves: how are police departments able to get their hands on weaponry like grenade launchers and armoured vehicles in the United States?

Through a program called the 1033 program or Law Enforcement Support Office (LESO) program, run by the Department of Defense, at least 8,000 law enforcement agencies have received $7 billion USD worth of leftover military equipment. Initially established in 1997 by the National Defense Authorization Act by President Bill Clinton as a way for the administration to look tough on crime and the war on drugs. The program allows for the relinquishing of extra or “outdated” military equipment to police departments who request it. They receive a fairly inexpensive deal for the gear, only paying the cost of shipping. The Department of Defense provided ill-equipped police departments with weapons designed for war against civilians, whose officers were woefully unqualified to use said weapons.

As police insist, a fair number of inventory received by law enforcement departments is made up of harmless things like office equipment, clothing and radios, but also includes armoured vehicles and rifles that invariably contribute to a culture of power and brutality within police forces and does little to foster trust and dialogue with policed communities. The police forces’ blatant use of disproportionate force and militarized presence at protests attracted outrage during and after the Black Lives Matter protests in Ferguson, Missouri in 2014. As a result of this, the Obama administration restricted some surplus military gears from being transferred to police departments, like armoured vehicles, but the Trump administration reversed the previous administration’s policies. More recently, the Biden administration has plans to reinstate the restrictions of the Obama administration onto the program, however the restrictions serve little purpose and still leave much of the program intact. According to the Richmond Observer, “Even with the Obama limits, police continued to have access to military surplus equipment, including high-powered “assault” rifles, mine-resistant vehicles (MRAPs) and armoured Humvees, aircraft, drones, night vision equipment, battering rams, and other military-grade items.” Much of the pushback against these restrictions come from police unions.

The role of police unions

In the labour movement, police unions are seen as outliers by other unions largely because of their stature as impediments to racial equality. The role of police unions in blocking the curbing of military equipment sales to police departments is also telling of their understated power and invulnerability. In fact, the power police unions have, in general, in ensuring police officers do not get fired or even punished for acts of police brutality is enforced through collective bargaining agreements that ensure review boards made up of civilians as well as police internal affairs departments lose any semblance of power to go after police activities.

Police unions have worked to provide higher pay, better working conditions and procedures of due process for their workers. Moreover, police officers under unions “make almost 40% more than their nonunionized colleagues.” However, according to a paper published in the Journal of Law, Economics, & Organization, “collective bargaining rights led to a substantial increase in violent incidents of misconduct among sheriffs’ offices relative to police departments,” as officers feel more protected from potential misconduct investigations. This has repeatedly led to the fostering of a culture of invulnerability on behalf of police officers.

In other words, the way police have evolved into an ostensibly militaristic force can be predicated on factors like union contracts that delay oversight on disciplinary action related to police misconduct.

Police unions, such as the National Fraternal Order of Police, have often hampered calls for police demilitarization by lobbying to stop legislation trying to impose restrictions. Pro-police groups have lobbied to maintain the 1033 program despite bipartisan support for reforming the program. Since 2007, the NFOP has spent at least $220,000 each year to keep up police lobbying, and its influence is demonstrable. With over 351,000 union members across the nation, the NFOP influences both state chapters and local chapters; police unions were also bolstered by President Trump’s calls to send the American military to deal with protests in states where governors could not allay the protests.

The uprisings of the past year has been an electrifying and heartening show of solidarity against the killing of George Floyd and wider systemic racism, but it certainly did not start there. Police militarization has been in the American national discourse since at least the Ferguson protests in 2014. The influence it has had on police brutality protests worldwide has once again renewed a decades-long debate on the relationship between police and protesters in the United States.

So, what are the implications of police militarization on protesters? At a time in which over 90% of George Floyd protests have been peaceful, the use of armoured vehicles and various other military equipment is a glimpse into the evolving culture of policing in America itself. There is an ominous lack of oversight and scrutiny when it comes to the purchase of military-grade equipment by police departments; these purchases often lead to brutality by the nature of its intended use in war. One of the primary problems are police unions which are at the heart of maintaining police militarization: their resistance to body cameras, advocating for the sealing of disciplinary records of police officers, and the reversing of job terminations of officers who have engaged in misconduct are just small examples of the lack of police accountability.

The featured image, “The intimidation police are here” by Reylinn McGrath, is licensed under CC BY-NC 2.0.