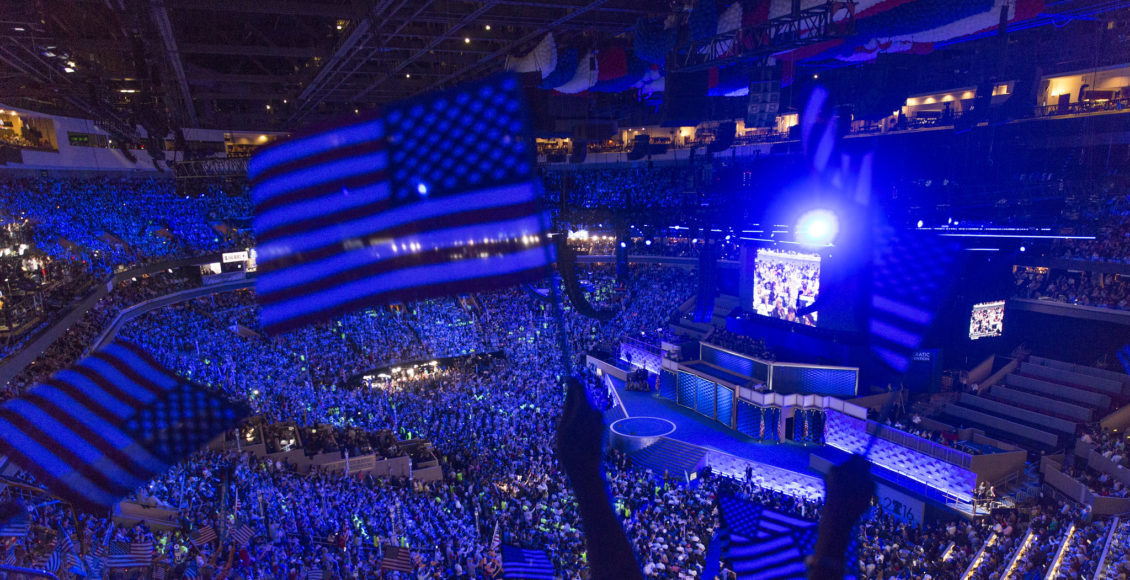 Flag waving at the DNC on Thursday night. https://www.flickr.com/photos/number7cloud/28015080104
Share

At the annual summit for the Obama Foundation this year, former President Barack Obama addressed issues regarding civic engagement in the United States. Not long after his comments were made, major news outlets focused their attention on his statements concerning the relationship between political activism and social media. While political activism has certainly changed with the advent of social media, Americans have always been keen on such activism. Since the foundations of the United States’ political apparatus were laid, Americans’ engagement with and perception of public affairs have played integral roles in shaping relations between citizenry and government.

Nonetheless, conventional forms of political engagement face competition to the extent that domestic audiences now rely on modern technological methods in order to keep up to date with politics. As such,  ‘woke culture’, ‘call-out culture’, and ‘cancel culture’ have gained newfound popularity, especially amongst social media users, as methods of holding politicians accountable for their actions. ‘Woke culture’ is a political term of African American origin which refers to “being aware of and actively attentive to important facts and issues (especially issues of racial and social justice).”  Additionally, ‘call-out culture’ generally refers to interpersonal confrontations between individuals that primarily occur on social media, whereby someone who is deemed to have done something wrong is corrected by others so that they can avoid doing it again in the future.

This culture of condemning individuals for actions and behaviours that are deemed reprehensible primarily serves to discredit controversial positions on matters concerning racial or social discrimination. In some instances, public censure in the form of “cancelling”, which seeks to severely limit reprehensible behaviour, can even lead to the removal of these individuals from social or professional circles. These novel methods are therefore considered important by those who use them because they prevent the political establishment from overlooking their concerns. Yet, former President Barack Obama has been highly critical of these new forms of public condemnation, especially through the use of social media, of which he believes facilitates inauthentic forms of political activism.

Obama, and those like him, pose a direct challenge to the idea of purity tests, which call-out culture seeks to uphold through the public shaming of individuals. The notion of purity tests rests on establishing progressive credentials, whereby people who are otherwise considered allies face the risk of being excommunicated for being insufficiently orthodox. He argues that “people who do really good stuff have flaws” and that there’s a trend, particularly among young people on college campuses, wherein individuals seek change by being “as judgmental as possible.” He does not believe this call-out culture is a genuine form of activism that brings about change in society. However, Obama’s assertions continued with his remarks on the ills of social media, in which he maintained that technology causes greater inequality and makes the public more divided as it becomes increasingly central to modern life.

The point that Obama seemed to be making is that politics, and especially the complex nature of American politics, is not a black and white picture; nobody is perfect. Yet, politicians face an increasingly hostile political and social environment which is beginning to look a lot like a finger-pointing battlefield rather than a domain for healthy political debate. The question, then, is what exactly is the best way of holding politicians accountable so that it is conducive to true political activity rather than solely reliant on passing judgement? After all, one of the primary markers of a healthy democracy is the ability of the citizenry to hold elected officials accountable.

The most obvious method of becoming politically active is voting. However, the young people that Obama sees as change-seekers through ‘call-out culture’ are part of a demographic who have dismal voter turnout records. Although many young voters appear to be politically motivated on social media platforms, they often fail to turn out at the polls. Only 43 percent of 18- to 29-year-olds eligible to cast ballots voted in the 2016 presidential election. Nevertheless, voting is just one avenue for political activism in the United States. Social media now acts as a significant provider of unprecedented organizational opportunities for political activists.

Social media now lies at the heart of political protest in the United States. These platforms have altered the nature of political protests by providing unprecedented expediency for political movements to consolidate. Political protests no longer take “weeks of planning, newspaper ads, phone trees” and charismatic figures, such as Rev. Martin Luther King Jr., to become successfully organized movements that pose considerable challenges to their adversaries. However, social media protests do not come without problems. Campaigns that spend greater time and resources forging in-person connections may last longer than online movements that lack such ties. In addition, a great number of Americans feel that “social media makes people believe they’re making a difference when they really aren’t” and that such platforms “distract people from issues that are truly important.”

Yet, social media remains an important instrument for political communication in the United States. For instance, Obama himself used the power of social media to aid his campaign in securing the presidency. Furthermore, President Trump’s incessant use of social media makes it quite difficult to avoid the role that social media plays in conveying political messages to the masses in contemporary American politics. However, social media also plays a considerable role in relaying inaccurate information to audiences and often reinforces their predispositions. This process may include selection bias in regards to information exposure as well as interpretation through ideologically-motivated considerations. The significance of social media algorithms must not be understated here, wherein social networking sites, such as Facebook, show users similar content to what they previously interacted with, further reinforcing their biases.

Nevertheless, the essence of staying ‘woke’ remains important in contemporary American society. It is a reminder to remain vigilant and care about the people around you; it is a form of social awareness that calls for the creation of a better society by paying attention to society itself. However, being ‘woke’ and politically active are not one and the same. Hence, publicly assigning fault to individuals based on purity tests leads otherwise politically active citizens to not only think that whatever they are doing is always right, but also that partaking in such activities is a genuine form of political activism. This is at the core of Obama’s message. Social media leads many individuals to equate the two. Thus, it is ultimately the responsibility of citizens to bridge the gap between social awareness and political activism.

Political awareness and political activism must go beyond the realm of social media. Although holding judgmental views about politicians with controversial beliefs bodes well for ensuring the legitimacy of political awareness in contemporary American politics, censuring these politicians solely through the use of social media may have undesirable effects. In light of the 2020 Democratic Party presidential primaries, Obama unsurprisingly fears that the Democrats will “have such a small party and will not be able to win” if assessments of candidates are based on such purity tests.

Feature image “Flag waving at the DNC on Thursday” by Lorie Shaull is licensed under CC BY-SA 2.0.