Politicians and the Industry of Funny 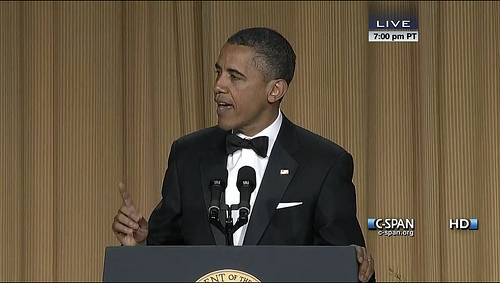 Do politicians really have a sense of humor? After this week, one might think so. Toronto Mayor Rob Ford recently angered many by appearing on Jimmy Kimmel Live, a late night show in the United States. Trying to play it straight as host, Kimmel read his mayoral guest some messages he had received from angry Torontonians who were not happy that Kimmel was hosting the mayor. Rob Ford was an “embarrassment” they said, on issues such as the use of drugs, racism and many other matters. The protestors had followed the mayor all the way to the United States. Ford, though, simply laughed it off.

Was Mr. Ford blind to his being badly portrayed on the show? The mayor was thought to have indeed embarrassed Toronto, and Canada, as recently noted by Canadian-American actor Martin Short. So, clearly, things did not go well for Mr. Ford. However, according to him and his brother Doug Ford, things went very well, thank you very much. “The audience went bananas for Rob, they loved him,” said Councillor Doug Ford. Rob Ford also later bragged that Kimmel was “better than the Toronto media.”

His swipe at the media suggests that there is little peace between the “Toronto media” and the Ford brothers. In fact, some news sources, like The Globe and Mail, were pleased with the outcome of the Kimmel and Ford show – for very different reasons.

In an editorial aptly titled “Late Nite with Rob Ford: Jimmy Kimmel did us all a favour,” the paper took the mayor to task:

“But while Mr. Ford obviously agrees that there is no such thing as bad publicity, his junket to Hollywood is proof of the opposite. It highlighted the most insincere and galling aspects of Mr. Ford’s version of politics. It also highlighted his remarkable lack of self-awareness. He was not invited to appear on Jimmy Kimmel Live as an exalted foreign dignitary. He is not America’s model mayor. Mr. Kimmel instead cast him in a part he’s been successfully playing on television for months: America’s favourite sideshow freak.”

To the Globe, the Mayor was an unaware circus in town. Or as they put it, “Typically of Mr. Ford, he still does not get this. He was summoned to Los Angeles to be the piñata at the piñata party.” Is this fair, you might ask? Whether it is or isn’t fair, it is because of such criticism that Mr. Ford remains a popular politician, backed by his so called Ford Nation. To one side he is a joke, but to the other, a victim. Toronto is divided, but the upcoming municipal election might change that. Indeed the question remains – why would the mayor go as far as Los Angeles to score political points? Did the mayor see something many did not see? Is he a political genius? These are questions deserving of some analytic probing. Whether one does or does not like the man, he might make for an interesting study.

A few weeks after the Ford-Kimmel affair, another case comes before us, featuring the President of the United States. Obama recently had an interview with comedian Zach Galifianakis on his famously awkward web-show, Between Two Ferns. In the interview, Galifianakis threw questions and punches at the president on issues such as the pardoning of turkeys, healthcare, and foreign policy. Obama retorted by hawking the Affordable Care Act (AKA Obamacare). Nor is this the first time Obama has made pretensions towards comedy: his speeches at the annual White House Correspondents’ Dinner are known for being quite funny.

There were mixed reactions to the interview. To some, like the Rolling Stone’s Kory Grow, the President handled the interview with verve. According to Grow, “…it showed again that the president understands a punch line, even if it’s awkwardly paced.” Contrast that with the Globe editorial on Mr. Ford, which suggested that he downright failed to understand that he was the butt of the joke. However, Mr. Obama has received some criticism. Given his stature and role as “leader of the free world,” it is predictable that he would receive much more criticism than Mr. Ford would. Some of it will be predictable – particularly from his political opponents. To one of Obama’s biggest critics, Bill O’Reilly, going on a comedy show was reducing the office of the president to a joke. “All I can tell you is that Abe Lincoln would not have done it,” swiped O’Reilly. In short: rightwing heads exploded, referring to Obama’s performance as “gross”.

A convincing case could be made for Mr. Obama. He was using the show to target a specific group and sell his healthcare program to the American youth. For the White House, their move was a success, a mission accomplished. Obama was unafraid and willing to “trade jabs.” and some news headlines claimed he “had his best debate ever”. Also, the Obama Care website was reported to have seen a major spike in visits. With Ford, however, it was hard to find such a reaction. Pending approval ratings will also help us here. While it is difficult to dissect which group Mr. Ford was trying to appeal to, we can conclude that he was appealing to a specific group too, Ford Nation. Ford claimed he visited Los Angeles to promote Toronto; however, little of that was done on the show as more time was spent mocking him. Many Canadians were clearly perturbed by the Mayor’s comedic attempts, saying he appeared “clueless” and “defenseless.”

In both cases, there are two ways through which we can see if the humor strategy paid off. For Mayor Ford, it is victory in the upcoming election, a task proving much harder than the last time around. Having admitted that he had used drugs while in office, the mayor’s vision is clearly, and rightly so, under scrutiny. It is hard to see where the mayor is headed, unless it is Hollywood and humor avenue. For President Obama, who is in his last term in office, the best sign of victory will be in how much of his healthcare service(s) is successfully sold to America’s youth. This is a major part of his presidential legacy: a healthier nation for generations to come.

In “Humor as a Double-Edged Sword: Four Functions of Humor in Communication,”, John C. Meyer argued that humor used for publicity has its advantages and disadvantages. “Many consider a sense of humor a crucial indicator of good character. Yet, this sense of humor can cut both ways. It can be a kind, humane, friendly, pleasant means of communication through promoting identification and clarification of issues, or it can be wry, cynical, cutting, and even mean,” he concluded. Clearly the humor industry is not a politician’s safe heaven, unless you are a politician with some wit.

Indeed, politicians do have a sense of humor. However, at times they just miss realities before their constituencies. There is a risk. Their inability to gauge the political environment, particularly the sense of humor therein, might take them right out of office. And of course, not only humor will keep one in office, but the ability to weigh important issues too. Mayor Ford and President Obama, given their current love affair with the industry of funny, make for some interesting contrast.

By their humor we will know them. What was that quote?