The Prevalence of Narcopolitics in Honduras 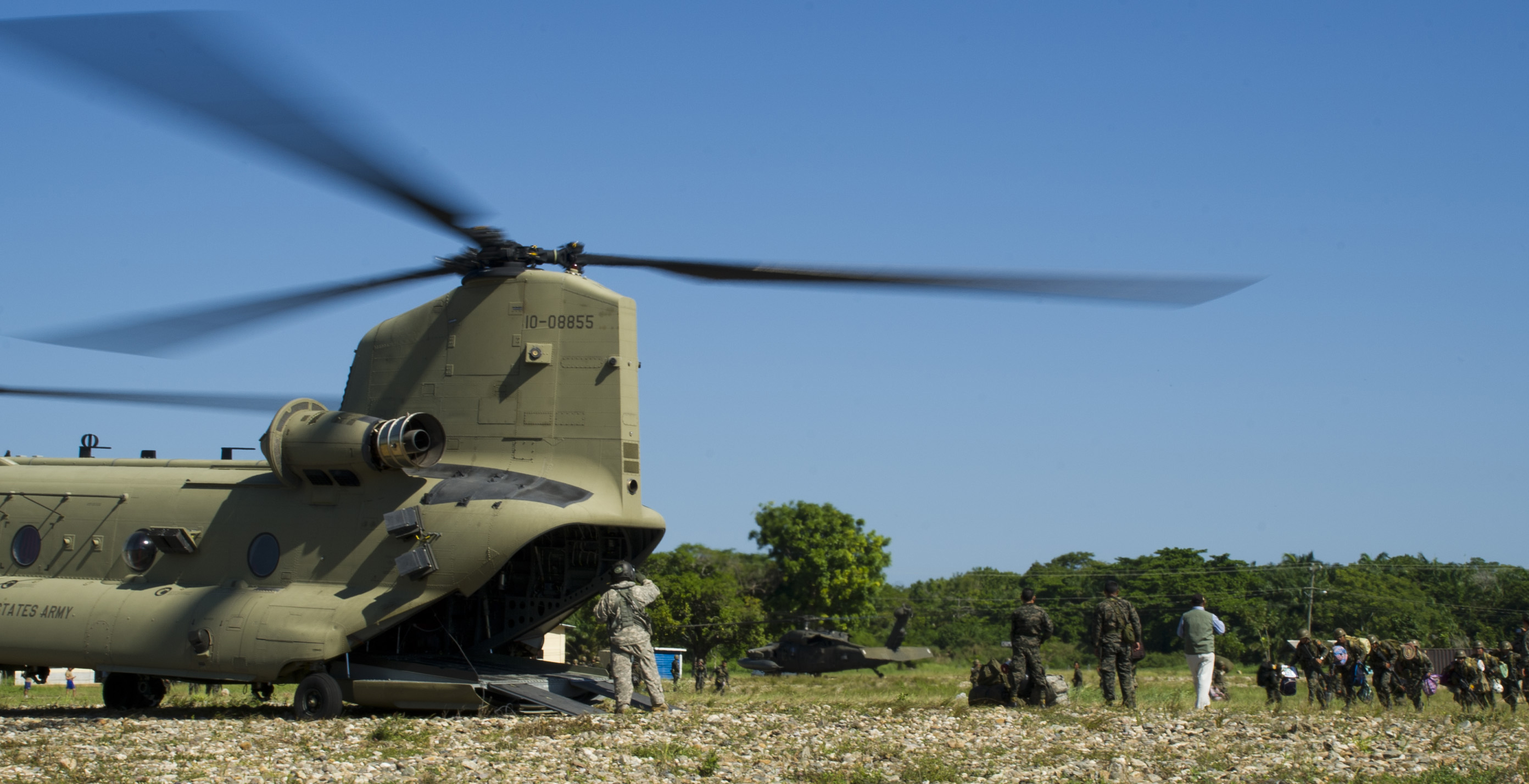 U.S. Army Sgt. David Pressnell, 1-228th Aviation Regiment flight engineer directs Honduran soldiers loading gear and personnel into the back of a U.S. Army CH-47 Chinook Dec. 16, 2015, in the Gracias a Dios Department (state) of Honduras during a troop movement the U.S. provides support to. The two day troop movement is a part of a larger operation called CARAVANA, which the U.S. has supported since October 2014, to assist the Honduran government in disrupting the flow of illicit trafficking through the area. (U.S. Air Force photo by Capt. Christopher Mesnard/Released)
Share

Honduras is widely known as one of the most violent and dangerous countries in the world, due in large part to the widespread drug trade that has spread throughout the country. Much of the violence that the country sees on a regular basis stems from the criminal cartels that are rooted in society. Efforts have increased an attempt to counter drug trafficking in the region, yet some efforts have been thwarted in Honduras due to counter-narcotic operations in other Central American countries, such as Mexico, which encourage traffickers to continue their business in less-policed countries. This, as well as other factors related to the geography of Honduras, influence the presence of narcotics and, consequentially, the politics of the nation. Honduras has struggled widely, both currently and in the past, in separating the drug trade from its politics. Drug trafficking is deeply entrenched in Honduran society, and the corruption of public officials is a widespread issue, impacting both local entities, such as the police and lower-level government officials, as well as presidential candidates, the military, and members of national crime-fighting organisations. Despite recent efforts to curb the influence of drugs on Honduran politics, its role as a major economic influence in the country prevents much progress within this realm.

The complex relationship between domestic politics and the drug trafficking trade is  influenced by the Honduran capital of Tegucigalpa and the country’s financial epicenter of San Pedro Sula. Bureaucratic elites in San Pedro Sula use their wide influence as leverage in affecting the political processes in Tegucigalpa. Additionally, both cities are home to a variety of drug organisations and gangs that have expanded their control to infiltrate many Honduran political institutions. This expansion has been exacerbated by the recent political instability in the country, especially following the 2009 coup deposing former president Manuel Zelaya, which drug traffickers have exploited.

Furthermore, the geography of Honduras plays a role in complicating efforts to combat the narcotics trade, due to the mountainous nature of the region. Mountains are found in 55 percent of the land area of Honduras, isolating various regions and permitting the prevalence of drug trafficking within them. Because the landscape of Honduras divides the country and separates many regions from the capital and financial center of the nation, authorities often fail to control these peripheral areas, which leads to a freer environment for narcotics trafficking. Additionally, the geography of Honduras relative to other countries in Central America makes it an important location for the drug trade. Although drug production in Honduras is minimal, because of its central location and borders with Nicaragua, El Salvador, and Guatemala, it is considered a transit zone for drug trafficking occurring between North and South America. This geographic importance shows that the narcopolitics problem in Honduras is rooted not only in the drug trade within the country itself, but also external organisations that use their money and influence within the nation. Because the Honduran region is an important stop in the transit zone, many drug trafficking organizations that operate within Central and South America have a vested interest in ensuring that Honduras remains a country favourable to their operations. Thus, these international organisations use their resources to influence politics within Honduras in addition to the domestic drug traffickers within the country.

The influence of narcopolitics in Honduras has not been limited to the politics of lower-level government, but rather has permeated throughout society to include even the highest political office. Prior to the 2013 elections, the head of the National Council against Drug Trafficking in Honduras warned about the impact that organized criminal groups would have, noting that drug traffickers were backing particular candidates that were sympathetic to them and investing in their campaigns. These elections included electing members of congress, mayors, and a new president, which demonstrates the wide-reaching impact of organised crime within Honduras and the constant struggle against corruption in the face of drug-money-infused campaigns.

Additionally, some political figures also use the prevalence of narcopolitics as a selling point in their campaign by pledging their innocence and emphasizing the need to fight against the influence of narcotics trafficking in politics and in the campaigns of their rivals. For example, a potential presidential candidate for Honduras’ National Party spoke out against the rampant corruption, mentioning that public officials that are financially supported by drug money will act contrary to the interest of the nation, and in favour of the criminal groups that support them. Narcotics traffickers and cartels take a strong interest in supporting certain candidates and campaigns because of the advantages that it provides. Many invest in corrupting mayors and other politicians of strategic territories to improve the facility with which they operate, so that both the traffickers and the politicians gain advantages from being bought-off. This form of corruption within smaller Honduran regions, as well as in its national elections, is especially troubling because of worries that the government will become fully integrated with politicians connected to the drug trade and work to promote the interests of the traffickers rather than the country. This will make it nearly impossible to separate the state from organised crime, and lead to the further expansion of the drug trade as a means of economic growth within Honduras.

Despite Honduras’ designation as a democracy, the military maintains quite a significant role in the political processes of the country. This is rather alarming considering the prominence of corruption within the military, which translates to an increased presence of narcopolitics. A particular example of this was discovered after the deaths of drug kingpins Mario and Mary Ferrari when their connections to many important members of the military were released, including several officers, an Interpol chief, and the chief of military intelligence. The role of the chief of military intelligence in narcopolitics is especially important, because his involvement allowed for the influence of drug trafficking to spread throughout the highest ranks of the armed forces. A prosecutor from the Honduran Attorney General’s office also has mentioned the presence of evidence connecting several small drug rings to operations by high-ranking military officials. This showcases the institutionalisation of drug organisations within Honduras, and also explains the difficulty in halting the continuance of narcotics trafficking. Because such high-level members of society are involved in the drug trade, they are protected by their status and seldom brought to justice. This is one of the reasons why many believe that in order for Honduras to combat the influence of narcopolitics, a process of demilitarization must be instated, and efforts must be made to return the country to more democratic processes of governance.

The influence of the narcotics trade in Honduras’ political institutions has complicated efforts to improve societal, political, and economic development within the country. Because so many high-ranking politicians are supported by and sympathetic to drug-trafficking organisations, it is often hard to separate politics from the drug trade. In order for Honduras to accomplish more in terms of raising living standards and decreasing violence, it must begin to tackle the problems that arise from the influence of narcopolitics in the country.