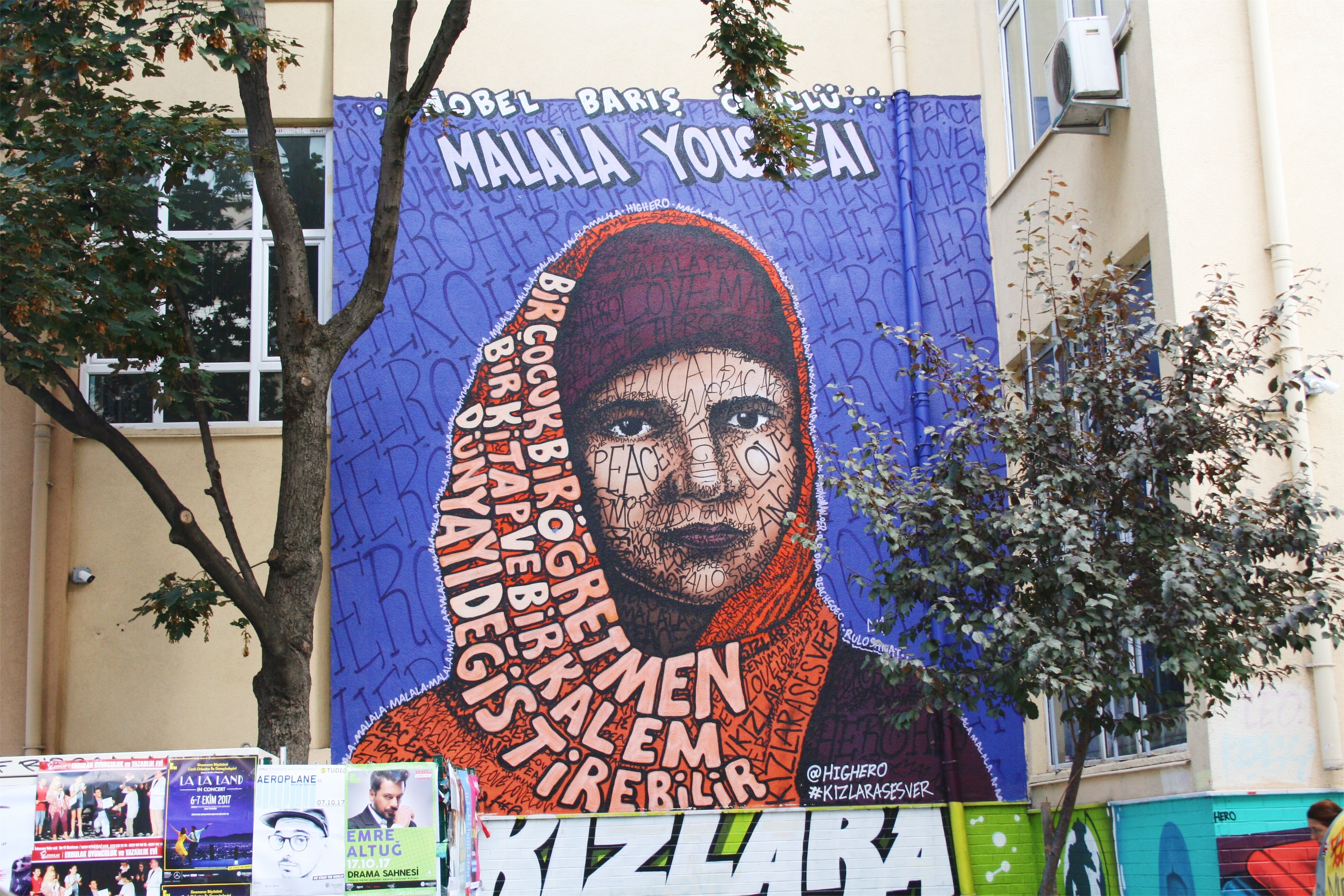 Turkey’s history is no stranger to public clashes between the government and its people over socio-political issues. In 2013 mass demonstrations took place after police took violent measures to end peaceful protests against the building of a shopping centre over Gezi Park in Istanbul’s Taksim neighbourhood. The popular rainbow steps of Istanbul located in Fındıklı and Cihangir were painted by a retired forestry engineer, which were subsequently painted over in grey by municipal workers. His efforts were not in vain, as the residents adored the colourful staircase so much that they came together in a community effort to repaint them. This specific art project is well-known of those in Istanbul, but those who have been to the city know that it is far from the only one. Murals decorate the walls in areas such as Beşiktaş and Kadiköy, many of them created with a political message in mind. One example is a mural located in Moda that celebrates Nobel Peace Prize winner Malala Yusufzai.

For the next three months on Protesting the Powerful: Art & Resistance in Turkey, I will be covering fine arts, music, film, and other forms of political art that make strong statements despite facing the risk of being silenced by the government. Politically charged art in Turkey – let alone Turkish art in general – does not receive much attention outside of the artists’ circles. This blog will enlighten readers on the political tensions and events in the country from a perspective that is not often visited, being those of Turkey’s artistic minds.

Although art can be found everywhere, where there is political contention one can find profound works of art that challenge the status quo. While I will focus on artists who provide commentary on Turkey’s current political narrative, I will also explore artists who make political statements on a variety of issues, not just those protesting against the current political regime. These will include social movements such as the Islamist Movement, the Women’s Movement, and the Kurdish Movement.

In a country where the government has suppressed other influencers outside of the artistic world such as journalists and academics, it is important to provide a platform for these rebellious voices outside of their regular social spheres. These artists risk consequences such as lawsuits, jail time, or even exile if they publish work that insults or criticizes Erdoğan and his government. Despite the bleak outlook, the artists featured on this blog exhibit both bravery and love for their country. They deserve to have their art experienced not just by those living in Turkey, but by people throughout the world.