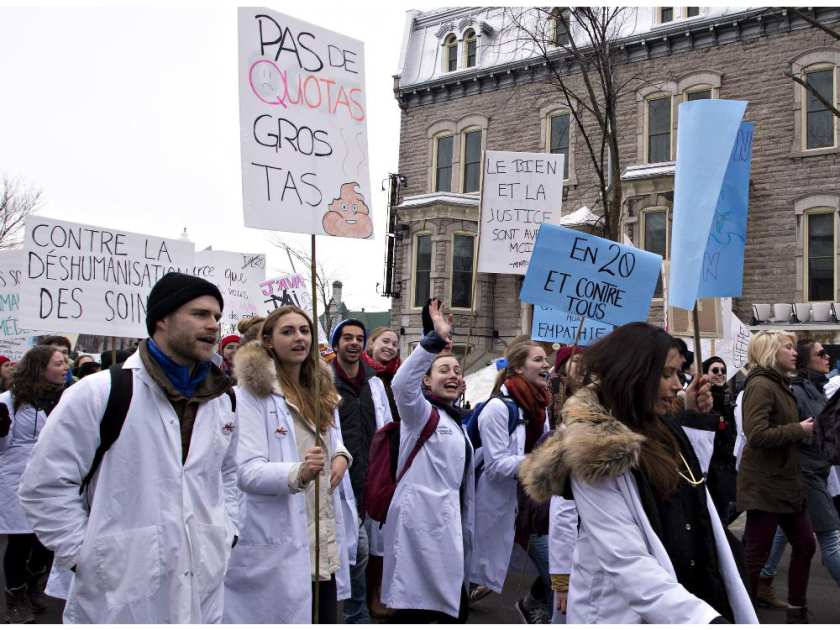 Health matters. Being healthy enhances life quality by enabling people the ability to do a variety of things in their lives. Whether one can enjoy these privileges largely depends on the government’s delivery of healthcare. In attempt to improve Quebec’s healthcare and to cut financial burdens on the government, in November 2014, the Quebec Minister of Health and Social Services, Gaétan Barrette, proposed Bill 20: An Act to promote access to family medicine and specialized medicine services and to amend various legislative provisions relating to assisted procreation.

family medicine in Quebec, Barrette proposed a minimum quota system that requires each family doctor to take at least around 1,000 patients. Failing to do so, the doctor will face a penalty of 30 percent reduction in his/her pay. Likewise, consultants or specialists are subjected to similar restrictions that will require them to respond to at least 75 percent of referrals. Barrette also put forth a policy that restricts females under the age of 18 and over the age of 42 or that have failed a health evaluation from participating in the IVF program. All three of these proposals Barrette hoped to pursue received a lot of public attention and strong opposition, in particular, from concerned doctors. Whether Bill 20 does, realistically, improve healthcare is a debate of perspectives, between primarily medical and political stances, over healthcare delivery.

One of the main ideological clashes in Bill 20 has to do with the balance between family doctors’ workload and the accessibility of clinic healthcare. Barrette argues that public access to family medicine could be increased by adding extra workload to doctors in Quebec, based on the premises that they work less relative to other provinces across the nation. Barrette also notes that “60 per cent of general practitioners in Quebec work less than 25 weeks a year”. According to a study conducted by C.D. Howe Institute, the Quebec doctors only work 34.9 hours weekly – around 8 hours less per week compared to the national average. Not only do they work less, the average number of patients a doctor visits in Quebec is 1,081, the lowest of all provinces in Canada, while the average number of patients per doctor is 1,750 in Manitoba and Saskatchewan. Barrette believes that there is a positive relationship between a doctor’s working hours and the number of patients he/she receives, which affects the accessibility of family healthcare, especially when 15 percent of Quebec’s population does not have a family doctor compared to only 4 percent in Ontario. Therefore, the logical solution for a politician wishing to solve social problems in the health sector, such as overcrowded emergency rooms due to low number of patients received by family doctors, is to propose a minimum quota policy.

On the other hand, medical practitioners argues that the increased workload does not necessarily solve the problem. Whilst the medical field also raises concern on the relatively low access to healthcare in Quebec, “[the] quota system … [is] essentially forcing [physicians] to serve more patients with the same or fewer resources”, argued Nebras Warsi, the executive president of the Medical Students’ Society of McGill University. Simply adding extra workload to family doctors endangers the quality of public healthcare delivery, which in return could create more problems, instead of improving said quality, as opposed to what Barrette argues. To the medical practitioners’ mind, Barrette’s solution is not a comprehensive, but rather an idealistic approach.

Also, medical practitioners accuse Barrette’s inability to recognize that family doctors in Quebec are struggling to balance non-clinical hours work with clinical work. Not only do doctors have to conduct clinical visits, they are also expected to spend their time in paperwork, research, and teaching. The bill only addresses a singular aspect of a family physician’s regular work – clinical visits. Therefore, setting a minimum patient quota is a trade off between a family doctor’s time for non-clinical work, clinical work and personal life.

Another conflict stems from the matter of denying medical services to patients and enacting budget cuts to a medical service to ease the financial burden on the government. Since the launch of Quebec’s public IVF program in 2010 with a $30 million budget, the program has received a higher popularity than originally predicted. The actual expenses was double the initial estimated costs – at nearly $63 million. As a result, the underestimation of the program’s success is causing heavy expenditure on the part of the government. Recognizing the problem, Barrette imposed restrictions to prevent certain people from participating the IVF service, in an attempt to ease the government’s financial burdens. Arguably, IVF is a non-essential medical program; it is only an alternative for individuals who are infertile and not discrimination against disabled people, as opposed to what some people perceived it to be. Further, it could be argued that restricting participation in the IVF program prioritizes the truly sterile patients – leaving the resources to them.

Nevertheless, limiting access to the IVF program is denying medical treatment to some, which conflicts with the basic principles of medicine and human rights. Infertility is a disorder. Having a disorder means that medical treatment is needed; IVF, an assisted reproductive technology, is the treatment. The logical conclusion is that this should be publicly accessible. Putting the IVF program as a last resort after other therapies is not reasonable. The patients should have the right to access all the available options. More importantly, Barrette has emphasized the importance of access to medical care in family medicine and yet he is limiting access to medical treatment – where is the consistency?

The end goal of both Bill 20 and medical professionals is the same: to improve the quality of healthcare, however different the perspectives a politician like Barrette, or a doctor may provide. Nevertheless, both Barrette and medical practitioners are idealists. Barrette has over-idealized the concept of increasing family patient care by demanding longer working hours, while medical professionals have taken  the government funding for medical treatment and resources as granted. The best way to reconcile and refine the bill with realistic standards would be a compromise between medical practitioners and Barrette. Physicians should participate in the bill’s consultation to provide a realistic idea of family medicine to policymakers to fine tune discrepancies, while Barrette should explain his financial considerations about IVF and the whole of medicare care to the medical practitioners.

Dahm, J. (2015). The expense of health: Major reforms to the Quebec healthcare system under harsh criticism.   Retrieved from http://www.mcgilldaily.com/2015/03/the-expense-of-health/

Forget, C. E. (2014). The Case of the Vanishing Québec Physicians: How to Improve Access to Care. Commentary, No. 410. Retrieved from https://www.cdhowe.org/pdf/Commentary_410.pdf