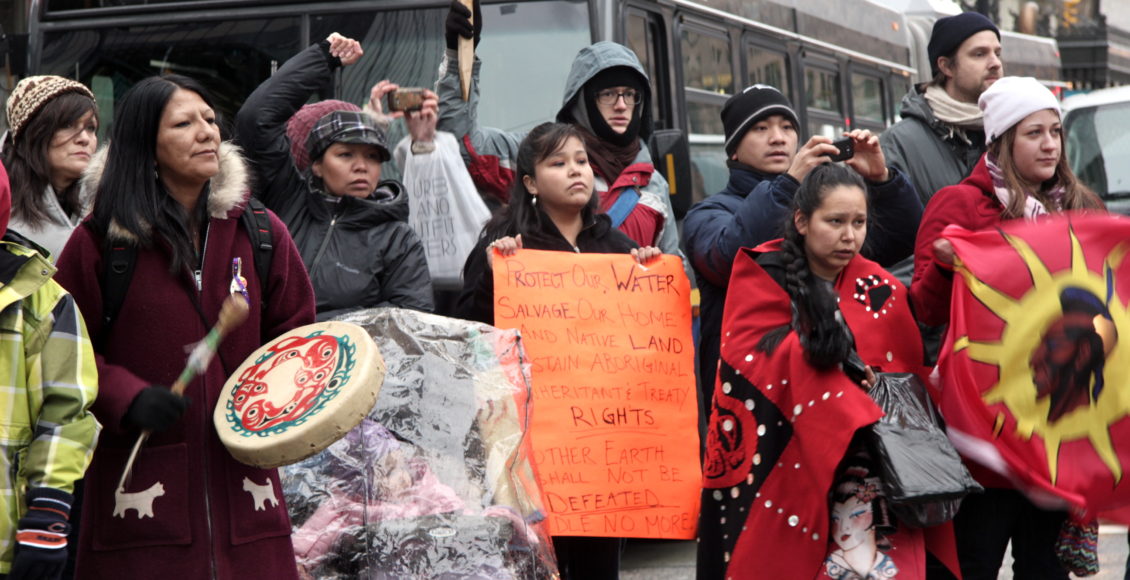 Over two decades after the closing down of the last residential schools in Canada, there are still Canadians who do not understand its significance in Canadian history and its relevance in contemporary society. The misconceptions borne of the 150 years of colonialism have diminished the rights of millions of Indigenous Canadians legally, politically and socially, to the point of living standards that many Canadians wouldn’t believe exist in this country. More recently, we have seen efforts made by the Canadian government to address the suffering of survivors and families of those who were forced into the residential schools: the 2008 apology by PM Stephen Harper, the 2015 Truth and Reconciliation  Commission, and the ongoing Inquiry for Missing and Murdered Indigenous Women. In the spring of 2016, Canada officially adopted the United Nations Declaration on the Rights of Indigenous Peoples,  announced by Indigenous Affairs Minister Carolyn Bennett to be implemented “in accordance with the Canadian Constitution.”

Yet, upon its establishment in 2007, more than a decade after the last residential school had closed, Canada was the only member of the Human Rights Council that voted against it. This decision, made under the Harper administration, was based on a divergence of principle between the Declaration and the Canadian constitution.1 The country remained on the objector’s list for another 6 years, after it released its statement of support of the Declaration in 2010. We see it time and time again: the countless promises seemingly unfulfilled, both as a cause and result of the confusion surrounding the existence and extent of human rights violations within the country.

When Prime Minister Justin Trudeau ran for and won the 2015 election, his party made promises of renewing relations between Canada and Indigenous nations, addressing housing, infrastructure, health, safety, legal enforcement, child welfare, and education. He pledged that by 2021, there would be a complete eradication of drinking water advisories in First Nations communities. There was a call for curriculum changes all over the country to increase education on Indigenous cultures, languages, and issues, which were meant to be fully established in this year. In his speech to the UN General Assembly, Trudeau spoke to the reconstructive efforts. He even announced a review of legislation in relation to Indigenous Peoples, and his party gave full support for Bill C-262, an NDP-sponsored bill for the government to take all necessary measures to ensure the law is in harmony with Indigenous rights. This past January, he visited the Nishnawbe Aski Nation, which had never been done by a sitting Canadian PM, to address the issues at hand. Just a few weeks ago, Trudeau met with chiefs from different nations from Saskatchewan and the leaders of the Federation of Sovereign Indigenous Nations, to discuss the ongoing concerns of the Indigenous peoples of the province. Unfortunately, there were only about 3 minutes given to each representative to present their concerns, due to a miscommunication and mismanagement of time.

This kind of mishap can be seen almost consistently: the government makes promises and even shows some extent of an effort in implementing them, but somehow such efforts always seems to fall short of fulfilment. There have been rallies and protests like the one last month in the Kaschechewan Nation of the James Bay area, where the residents and their elementary-level children had to fight for new infrastructure to replace the portables that were so unsafe and mouldy that the school year had to be delayed. There have been hunger strikes, like the one Qalipu Mi’kmaw veteran Richard Collier of Newfoundland and Laborador has been on for the past 5 weeks to protest his removal from Indian status which affects his ability to access health care for his hearing and post-traumatic-stress-disorder. For a country that preaches universal health-care and universal education, it seems ridiculous that there are so many instances in which it is so limited and so jeopardized by in the inaction of the government.

It is true that Trudeau most definitely expresses a concern and remorse for the history of aggressive injustices against First Nations, Métis, and Inuit nations on a caliber that has not been seen before. This has been welcomed by some Indigenous individuals, and criticized by others as preemptive political strategy against negative press. Ontario’s cancellation of the curriculum rewrite, the legal battles on the other side of the TRC and the resistance against the extension of the inquiry, all of these things diminish the hope for equality in this country as a crumbling hope in the face of reality.  We knew that reconciliation wouldn’t happen overnight— three years may not be enough to fix the centuries of paternalism and colonialism that sought to eradicate entire cultures and their languages in the name of civility. What might not be commonly known is that the legacy of this history doesn’t only limit the flourishing of Indigenous people, but the whole of Canadian society. Can Canadians, Indigenous or otherwise, have sustainable hope for a future of the country if the direction was set by principles and values that do not protect them?

The historical context of the Constitution Act does make it incompatible with UNDRIP, but perhaps the most interesting and confusing part of that is the fact that the Constitution Act of 1982 actually includes, under section 35, that “The existing aboriginal treaty rights of the aboriginal people are hereby recognized and affirmed.” This, and all its subsections, do not actually confirm or create any rights for Indigenous people, though it seemingly states, explicitly, a recognition for Indigenous people and pre-existing treaty rights. Though not a legally binding document, UNDRIP calls for Canada to reflect on its legal system and the very foundation of it, specifically S.35. The issue seems to be in the ambiguity of this constitution, which makes way for a disagreement of how to interpret the Declaration and the Constitution, and thus their compatibility.

Last year, leaders part of the Union of B.C. Indian Chiefs addressed the UN Committee on the Elimination of Racial Discrimination. They brought up the matter of the Doctrine of Discovery, which were decrees on which Canada itself was founded. The Doctrine is an outdated and harmful document from the 15th century that legally enabled Europeans to kill or enslave those who would not undergo religious conversion. Though the doctrine itself can be argued to be irrelevant today, it sheds light to the history, and legacy of the dynamic abuse against Indigenous Peoples. This past May, the UN held the third Universal Periodic Review, the results of which showed that Canada is still failing to protect the wellbeing and rights of Indigenous people.

Canada is a nation that has established its place in the world as a leader in peace and humanity. Its reluctance to be open about its shared history with the Indigenous nations on which it was built, and its slowness in implementing corresponding legal policies collapses that position. The international support that the United Nations and Non-Government Organizations represent mandates the Canadian government to reconsider how it conceptualizes and practice its obligation to its residents. The idea of human rights and its actualization is variable, especially as it trickles down from the international scene, through the federal and provincial offices to our classrooms and streets. The problem is, reflection on the part of the Canadian government has not led to the appropriate amount of action taken to remedy its mistakes. Perhaps this is indicative of the lack of willingness the Canadian government demonstrates to allow its Constitution to be a dynamic, living document as it should be. It is long overdue for the nation to step up in its role as a leader in human rights, which seems less promising when we conceptualize those rights based on an unequal, unfair, and unclear foundation.