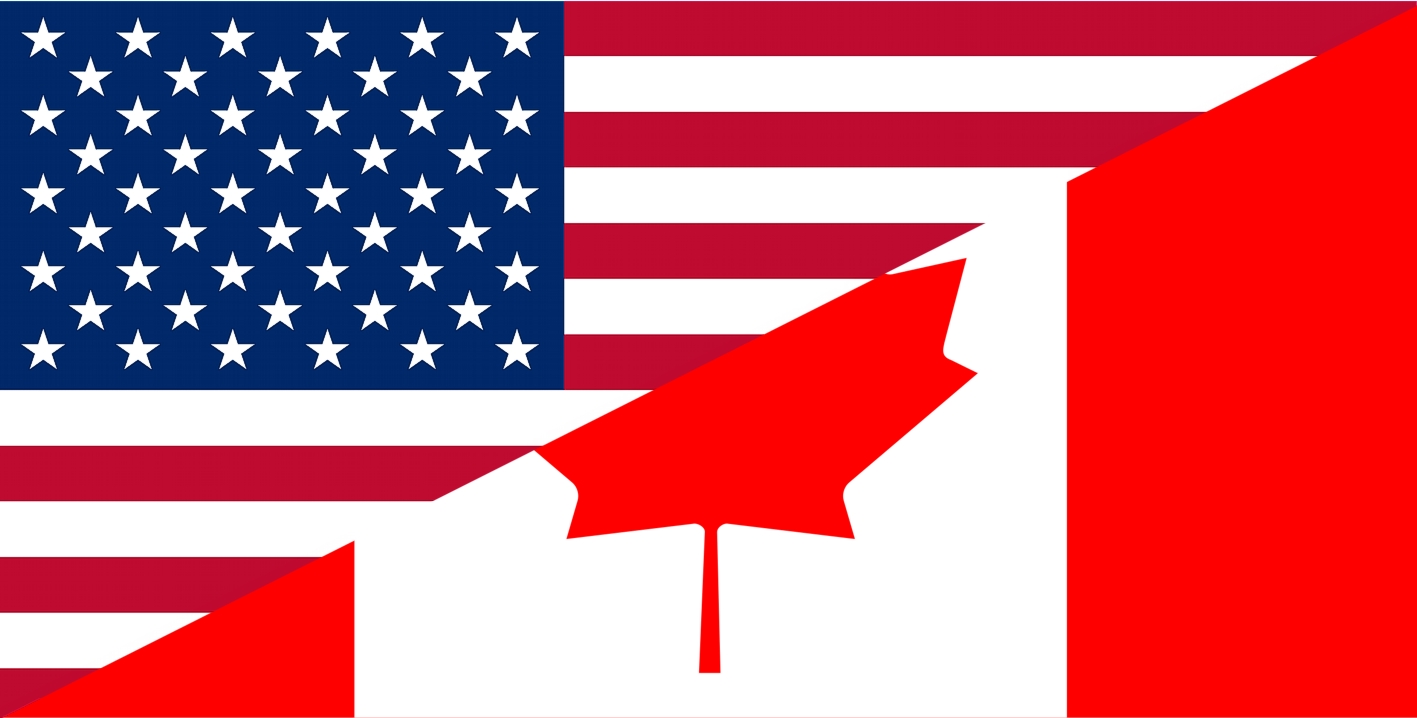 Depiction of flags of the United States and Canada. http://bit.ly/2DmJ4wg
Share

Among the top 10 immigrant-friendly nations include Canada and the United States, unsurprisingly, as both of these nations take on an incredibly large number of immigrants yearly. Nearly 21% of Canada’s population is foreign-born whereas the United States houses the most immigrants in the world, by a landslide, at over 45 million. In comparison, the next-in-line countries are somewhat of a tie between Germany and Russia, hovering around the 10 million mark. It is safe to say that immigration is an integral part of history as well as present policy in North America. Despite this, there seems to be a large misrepresentation about Canada and the U.S. in regards to immigration. Despite the numbers, Canada is often the one that gets painted as the friendly, open and eager country, ready to take in the world’s immigrants with open arms. The United States, on the other hand, gets painted as the closed-door nation continuously plagued by struggles with regards to immigration policy. The reality, however, is not what always gets portrayed in the media. Canada is much more selective about its immigrants than it likes to lead on, and the United States is much more equitable in regards to immigration than what is portrayed. The immigration policies of both nations differ in fundamental ways. Further, the geographical location of each nation is one of the greatest contributors to the challenges that affect their respective immigration policies, which contributes to how each nation’s immigration policy is perceived.

Before beginning to understand immigration policy, it is important to understand what an immigrant is and the different types of immigration. As defined by the Merriam-Webster dictionary, an immigrant can broadly be defined as “a person who comes to a country to take up permanent residence.” Largely, Canada and the United States categorize immigration in a similar manner. Permanent immigration admittance is broadly made up of 3 major classes: family-based, economic-based, and refugee migration (see this for United States and this for Canada). However, both nations also explain that refugees do differ from other sorts of immigrants based on the circumstances behind why they choose to apply. Both nations also accept temporary employment-based migrants. Further, the U.S. has an additional program titled the “diversity visa program” which is a program that accepts migrants from countries with lower immigration rates on a lottery-basis. Canada also has some differences with provincial-level immigration systems, such as in Quebec, which can exhibit relative sovereignty over its immigrants.  Categorizing immigration in a similar manner is only superficial; the true difference lies in the actual policies regarding the admittances of these immigrants.

The United States accepts the bulk of its immigrants (excluding naturalized citizens), specifically 64% in 2015,  through the family-based program. This comprises of a scenario in which an immediate relative of a current U.S. citizen may apply for immigration or through a “family-preference” system, in which families may sponsor a relative to apply for immigration. As outlined by analyses completed by the Congressional Research Service, this policy is largely based on numbers and available spaces, as well as a preference system based on the type of relative a prospective immigrant constitutes. On paper, these criteria take precedence over country of origin or socioeconomic status. Consequently, this creates a more diverse range of migrants as economic and educational status is relatively irrelevant. 40% of all of the United States’ immigrants are split between five nations of geographical diversity, with Mexico being somewhat of an outlier, constituting 15% of immigrants. The family-based program is a cornerstone of American immigration, which really came to public attention once Trump’s administration moved for a merit-based immigration system – this was met with much public controversy.

Canada, on the other hand, accepts the vast majority of its immigrants, coming in at around 60%, through its economic-based immigration program. Canada uses a “point-system” in which a prospective immigrant receives additional points for their level of education, economic status, skills and language proficiency. This allows Canada to very much cherry-pick its immigrants for what it believes will be best for its economy. Consequently, this results in a much more narrow group of immigrants, limiting those who are of lesser means. Diversity becomes lesser as well, with 60% of immigrants coming from Asia; however, 40% of those are split between only 3 countries: China, India and the Phillipines. Furthermore, the numbers regarding diversity are misleading – as mentioned above, Quebec has relative sovereignty over who it accepts as immigrants. Thus, regions such as Northwest Africa have a 15% immigration rate into Quebec, compared to 3% in the rest of Canada.

The story of immigration policy, however, doesn’t end at which immigrants the countries accept but also who they refuse – namely, on the topic of illegal immigration. One aspect that rarely gets contrasted between the two nations is geography. The United States has historically dealt with an overwhelming amount of people illegally crossing its border, with about 11 million undocumented immigrants residing within the borders in 2012.  This is contrasted to the meagre number of undocumented immigrants in Canada, with available estimates ranging from 20 000 to 200 000. The United States’ solution to this matter is often deportation. Under the Obama administration, there was a record number of deportations of illegal immigrants. Thus, despite its current relevance in the media, this matter is largely not a novel issue for the U.S.

The United States shares its border with Mexico, from where the vast majority of undocumented immigrants come – however, beneath Mexico is a host of other countries who also contribute to illegal immigration. Unfortunately, as it currently stands, many of these migrants are forced to flee by living under corrupt rulers or regimes that provide no humane way of living. Nonetheless, having to mitigate such a grand domestic issue affects US immigration policy, and unfortunately often becomes generalized as to how the American government deals with immigration. Canada, on the other hand, has a position of relative privilege in this matter, with its only neighbour being the U.S, which largely protects it from illegal immigration by serving as a buffer of sorts. All bordered countries deal with migrants crossing the border, but this affects Canada on a much lesser scale than its Southern neighbour. This allows Canada to eliminate one more difficulty, leading it to have a relatively smooth execution of its immigration policy. Moreover, Canadians needn’t think hypothetically. In 2017, Canada, specifically in the border regions of Quebec, received a major influx of migrants illegally crossing the border. This put a strain on Canada’s capacity to respond to such large numbers, and while the Canadian government did allow for temporary housing of these migrants, with the passage of time there has been a significant number of these migrants whose refugee status has been rejected, and a number more who are on the deportation list. While this is acceptable procedure, it does go to show that when faced with a fraction of the migrant influx pressure that the United States deals with, the Canadian government must also turn to deportation as a solution. Yet still, Canada does not continuously deal with the same pressures facing the American government on this matter.

All of this is not to say that one country’s policy and regulations in regards to immigration are superior to the other; rather, it is to say that they are inherently different. While Canada does accept a large number of immigrants proportionally to its population, what it is not doing is accepting immigrants on the humanitarian-basis – a very popular notion these days. Canada accepts immigrants that will benefit its economy. It is an open immigration, supposedly blind to peripheral factors such as race and country of origin, so long as immigrants meet the highly selective criteria. Canada benefits from being able to make such selections by being a relatively geographically-isolated nation. The United States, however, deals with a completely different climate. Its policy is contingent on reuniting families, which objectively is more humanitarian. This policy allows for a highly diverse pool of applicants. Nonetheless, the U.S. is faced with immigration challenges, caused largely by its geographical location, that often get put at the forefront.

It can therefore be said with confidence that, as it stands, Canada selects its immigrants with a much more economic mindset compared to the more humanitarian and diverse method that the United States employs. Immigration policy is a complex matter in any case. Correctly analyzing who the people are behind the numbers is crucial in order to understand the very stark differences between how the two nations deal with immigration.