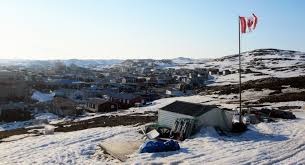 In Iqaluit, the capital city of Canada’s easternmost territory, food prices regularly exceed up to three times the national average. In communities outside the city, many of which are only accessible by plane, grocery bills top even this statistic, worsening a problem already exacerbated by the lack of vital infrastructure such as roads and airstrips. The federal government has made feeble attempts to address the issue through initiatives such as the widely-criticized Nutrition North program that attempted to supply food subsidies, but many of these plans failed to adequately consult Indigenous populations on what is really needed, leading to insufficient policies and a culture of almost permanent delay. Improving Canada’s Northern policy could prove to kill two birds with one stone: helping to improve daily life for those who live there, as well as consolidating Canada’s position as a defensive northern power in the face of rising aggression from Russia, China, and the United States, all of which have made claims to the vast territory and have taken steps to build influence.

Compared to its northern neighbours, Canada’s defensive capabilities in the Arctic are limited. While powers like Russia and the U.S. have spent the last several years building icebreakers and developing energy infrastructure, Canada is struggling to catch up with building even the most rudimentary infrastructure. For example, the joint Canada–U.S. North Warning System (NWS), which provides surveillance for nearby airspace, is at risk of becoming obsolete in the near future, and the Department of National Defence has made no plans to upgrade it. The high costs of doing so are exacerbated by the fact that there is little supporting infrastructure, such as roads, to facilitate the building process. While the benefits of such hard power are obvious, it is equally important (and advantageous) for the federal government to work on improving living conditions for those who are already residents of the area. This would contribute to establishing a presence that could be used to back sovereignty claims as competition over the Arctic’s plentiful resources grows more intense and make it a more accessible place to live.

One reason for the lack of infrastructure in the area is the small tax base relative to other regions in Canada. All three territories only house 113,604 people, one twenty-fifth of the number that live in Toronto, despite composing about 41 per cent of Canada’s land. The Northwest Territories, which receives annual revenue of $1.9 billion, draws $1.4 billion of that funding from Ottawa. While federal contributions are undoubtedly necessary to the functioning of the territories, they should be better directed to ensure their benefits are felt. Furthermore, not to be ignored is Canada’s historical neglect of the needs of Indigenous communities, which compose a large bulk of the Northern population. Examples such as the clean water crisis in Neskantaga and prevalent mental health issues in Attawapiskat indicate the extent to which the federal government has failed to step up when the Indigenous welfare is at stake. Additionally, when it comes time for federal budgets to be written up, Arctic development is often pushed to the wayside in favour of what Ottawa perceives as more pressing issues.

A document released by the committee of Standing Committee on Foreign Affairs and International Development in April 2019 titled Nation-Building at Home, Vigilance Beyond: Preparing for the Coming Decades in the Arctic placed heavy emphasis on the security challenges that Canada is likely to face in the coming years. It also acknowledges the need to upgrade much of our equipment, some of which have been in use since the 1970s. However, some worry that the sense of urgency conveyed by the report will not be appropriately acknowledged by decision-makers, which is further complicated by the lack of supporting infrastructure and robust economy.

Canada’s Arctic and Northern Policy Framework—released after significant delay in September 2019—is the first official Arctic policy to be developed in coordination with Indigenous groups, but it still fails to designate any specific actions, instead outlining high-level commitments. This represents part one out of two in the federal government’s plan to revitalize its approach to the North. One expert criticized the policy for not taking strident enough steps in new directions, instead referring to similar commitments that it has made in the past. It also provides no mechanism for future cooperation between the federal government and its Indigenous counterparts. Furthermore, given that territorial governments and Indigenous leaders authored their own chapters, which were published in a separate document, certain sections of the policy do not reflect federal opinion. While upon the report’s release the government proclaimed that “made in Ottawa policies have not been successful,” the report fails to take meaningful action on this.

The consequences for ineffective action in the North are grave. Those inhabiting Canada’s Arctic will continue to receive sub-par services compared to the rest of the country, and Canada will fall further behind as competition over resources becomes more fierce. The government should take a new approach: Indigenous communities in the Arctic coordinate with territorial governments to dictate policy, with the federal government committed to providing concrete support. This would enable funding to go toward where it would be most effectively used, by those who are most affected by its distribution.

The appointment of Dan Vandal as Minister of Northern Affairs is a step in the right direction—this is the first time that a minister uniquely dedicated to Northern policy has been appointed. On his first trip to the territories as minister at the beginning of the year, Vandal expressed his commitment to prioritizing education and action respecting climate change. But in order for all of Canada to truly be prepared for the coming decades, Vandal and Defence Minister Harjit Sajjan must work together to improve infrastructure and development in Canada’s Northern Territories before it falls by the wayside.