Reflecting on the Chinese “Jasmine Revolution” 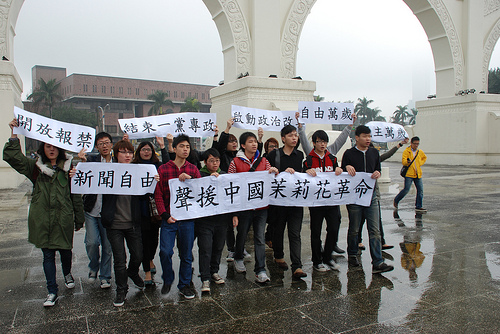 Roughly three years ago today, the Tunisian Revolution, which sparked the Arab Spring, successfully inspired “a handful” of Chinese to call for a revolution of their own. Unsurprisingly, the pro-democracy demonstrations for a “Jasmine Revolution” were quickly put down by the state. With slogans that called for food, work, housing, justice, and the end of one-party rule, the protest certainly captured the revolutionary fervor that has characterized modern Chinese history. That being said, I feel genuinely bad for those who think political agitation can manifest in such a frivolous manner. Such fervor is futile, and will only endanger oneself.

In China, political agitation needs to be re-imagined. A liberal democracy, which respects individuated rights, is too idealistic (for now at least). Chinese nationals are not fully participatory citizens yet. Additionally, the necessary “civility” to ensure the quality of voters (suzhi) is not adequate for a functioning democracy of over 1.3 billion people; even democratic regimes can agree that uneducated, uninformed and easily manipulated voters may not be the best to elect a government.

Many Chinese people are ambivalent or apathetic towards politics until they feel like they have been genuinely wronged by the system. And in combination with a potentially volatile population with starkly different socioeconomic backgrounds, one-party rule might just be necessary to make sure nationals with a widening income gap can merely coexist. Even if democracy is the  political ideal that states on Earth should strive for, I continue to secretly roll my eyes at people who say I’m racist for not believing China can be functionally democratic. The New Citizen’s Movement has simply not gained enough traction; the value in being a participant in the political realm is not understood yet by enough people.

Chinese politics can’t be articulated through shouting slogans anymore. To the Chinese people’s credit, some seem to be catching on. For example, Chinese “netizens” have learned to use homonyms to satirize political messages. Furthermore, a prosaic style has also emerged through matter-of-fact observations and simultaneous humility to avoid threatening heroic grandeur. In trying to shed light on the realities of censorship in China, a free magazine launched by pro-democracy activists on the eve of the eighth anniversary of the Tiananmen Massacre stated:

For sure, here there are no passionate words and soaring speeches typical of inaugural statements. This is because our basis for founding Tunnel lies in technology. Free and shining ideas have always existed. It is a matter of whether they can be disseminated. The reason why autocrats could seal our ears and eyes and fix our thoughts is that they monopolize the technology of disseminating information. Computer networks have changed this equation. . . . The question is whether we know how to use this technology. Instead of indulging in the talk of noble causes and great aspirations, it is a better idea to quietly and patiently study the details of the technology. If we have turned our inaugural statement into a technical manual, it is because we are trying to practice this idea. It may be easier for us to approach our shared dream of freedom and democracy through the sideways of technical details than the public square of seething emotions.

As much as democracy may be perceived as the “least bad” political system, Chinese nationals should examine where democracy has arguably failed before blindly yelling slogans to their own detriment. I’d personally want to investigate the political value of the vote, the American plutocracy, why bicameralism led to the American government’s shutdown in 2013, NSA and the invasion of privacy, or even the Ukrainian protests happening right now before committing to a Western democratic model.

Democracy shouldn’t be the end-all and be-all political goal; meaningful, reciprocal, and participatory citizenship might be able to manifest itself under different systems too. Studies have shown that Chinese netizens have actually successfully pressured the government to make changes to its social policies. Reform under the current system could be another way in which change for the Chinese state can be enacted; China has an up-and-coming urban proletariat that Marx could have only dreamed of. If Hungarian theorist, Karl Polanyi, was right and, “Socialism is, essentially, the tendency inherent in an individual civilization to transcend the self-regulating market by consciously subordinating it to a democratic society”, how the citizen can help to transcend the self-regulating market to favor a whole populous becomes the question.

Herein lies the only place I hope China’s revolutionary fervor will not lose its footing: a faith that perhaps socialism can be fiscally and socially responsible to its citizens.