Refugee Camps: A Ceaseless Policy Struggle for Greece and the EU 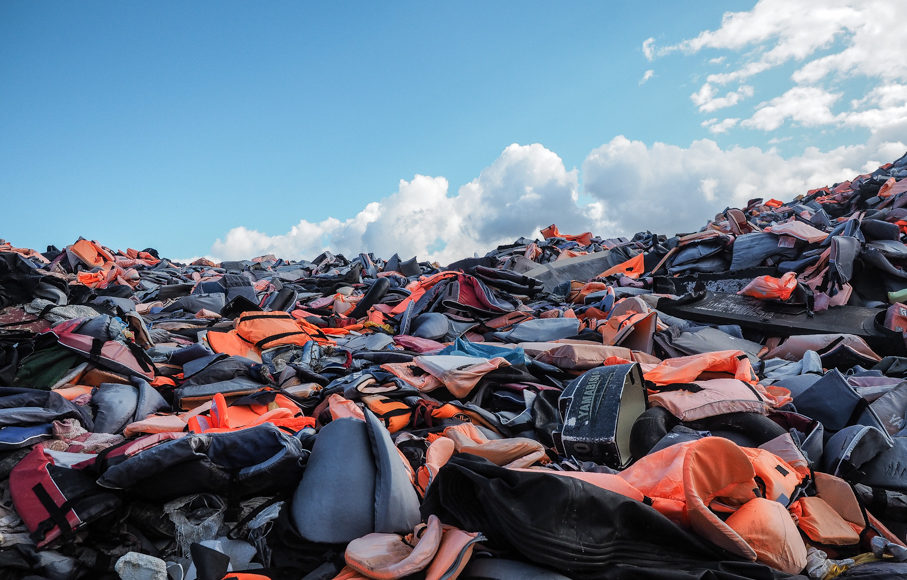 The life vests refugees used to cross the Aegean in Lesbos. 2018_01_11_Lesbos_Mònica_03 by Fotomovimiento is licensed under CC BY-NC-ND 2.0
Share

Since 2015, Greece has been battling one of the worst refugee crises in modern times. People from war-torn countries still cross the Aegean sea from Turkey to the Greek islands. The passage has become one of the most dangerous in the world due to its high death toll. Thousands have died in the process, while others have found themselves in often-overcrowded refugee camps across the country. The circumstances under which people live are worsening by the day, and more refugee arrivals limit Greece’s ability to address the crisis.

The Greek government recently made the decision to shut down two of the largest refugee camps and remodel them. The question of what comes next for the people within them is still up in the air. The status of these refugees has been in the hands of Greece and the European Union, and the failure to alleviate such pressures is a result of neglect on both sides. The European Union left Greece to fend for itself after some member states tightened their border control and refused to absorb a percentage of the refugees. For its part, Greece lacks the resources to accommodate such a large number of refugees.

The Realities of the Camps

Life in the camps is not easy. The Moria camp in Lesbos, designed to hold up to 2000 people, is currently hosting over 13,000. Other camps, like Vathi in Samos, suffer from a lack of necessities due to overcrowding. The struggle of those living in such camps has largely been excluded from the mainstream media narrative since the onset of the refugee crisis in 2015. Currently, many are short of the essentials to live, lining up hours to use bathrooms and acquire food. In the Moria camp, many must shower outside, using only a hose.

Accounts by inhabitants are chilling.  A young Iraqi named Samir Alhbar told the New York Times that he suffers from post-traumatic stress after fleeing ISIS in Iraq. He recounted that he sleeps with his valuables in his pockets because people get robbed in their sleep in the camp.

The overcrowding which causes such struggles in these islands is the result of a European policy which did not allow refugees to leave the Dodecanese, the Greek islands facing Turkey, for the mainland. This policy was included in the deal Europe struck with Turkey, which agreed to help curb the number of incoming refugees to Europe. The plan to distribute refugees across available camps has thus become a task of great complexity.

Dunja Mijatovic, the Council of Europe Commissioner for Human Rights, stated that the situation on the Aegean islands has become an “explosive” issue, with conditions worsening due to the continual migrant inflow.

There is no lack of information available to European countries on how to handle the migration flows in a coordinated, safe and organised manner which upholds the human dignity and rights of migrants. https://t.co/fDoV0v4Udo

However, Greece has surpassed expectations when it comes to other camps, especially on the mainland. Inhabitants are offered a greater quality of life in less crowded conditions on the mainland while the government begins employing more people to overhaul the island camps.

The inflow of people through the Aegean has not halted. Recently, the Greek Prime Minister Kyriakos Mitsotakis in Zagreb accused Turkey of using the refugee crisis as leverage to ‘blackmail’ the European Union, while violating its 2016 agreement with the EU. Mitsotakis has also started pressing the EU to assist in the management of the refugees and mitigate the situation. He urged other European members to stop pretending this issue is one that only concerns countries on the eastern border. He also announced a policy to bring more refugees to the mainland in order to alleviate the pressures on the over-crowded islands. He stated that his government plans to ship more than 10,000 people back to Turkey while asylum requirements are being tightened.

Those who are refused asylum in Greece will have to go through a very similar process in Turkey. They will have to stay in enclosed immigration camps until Turkey decides their future.

In light of these struggles, the government also announced that the refugee camps which host the most people will undergo re-structuring. Migrants will not be allowed to exit and walk the streets any longer and while they will be offered food and shelter, they will not be able to leave until they are granted asylum. This constitutes an attempt by the Greek government to attain a more thorough understanding of how many people are within each camp and regulate them accordingly. However, it decreases the freedom of movement for an already restricted group.

A tightening of the asylum policy by requiring stricter criteria for asylum requests is also on the agenda. The combination of these two policies strives to create a safer environment with better regulation and help Greece deal with the situation in a way that avoids warehousing people for long periods. This decision reflects Greece’s inability to absorb the population of refugees, even with the notable number of existing refugee camps.  It’s a tough policy, but one of the few that Greece can currently afford, especially due to its relatively small size and financial resources. The lack of assistance and neglect of the issue by the European Union has left Greece with few alternatives, none of which are ideal. These seemingly strict steps are a result of this. However, if Greece does manage to reduce the number of people living inside those camps, their circumstances and quality of life are likely to improve.

What Can Be Done?

The way in which Europe has dealt with this issue over the years is not one for praise. On the contrary, its failure is embodied in the realities of these camps.

The European Union needs to be more attentive towards this issue. Greece can only do so much, as it lacks the resources to host the ceaseless inflow of refugees. It is inhumane to dismiss them in the way that Europe has done by ‘parking’ them in camps in the Balkan area.

One potential policy would be to send representatives to Greece to assist in the reorganization of the camps. The EU could also provide resources to the authorities who deal with the camps and the asylum applications to further mitigate the situation. Greece is lacking in this sector, especially since the resignation of Yiannis Balbakakis, who ran the camp in Moria.

The current situation must be addressed urgently. The European Union has to provide assistance, especially since there is ‘no lack of information’ on how to deal with this subject, as hinted by the EU Commissioner of Human Rights. While Greece is taking steps to create an eventually more humane and realistic migration process, its efforts will continue to fall short unless Europe can be convinced to do its fair share.

Featured image credit: The life vests refugees used to cross the Aegean in Lesbos. 2018_01_11_Lesbos_Mònica_03 by Fotomovimiento is licensed under CC BY-NC-ND 2.0.