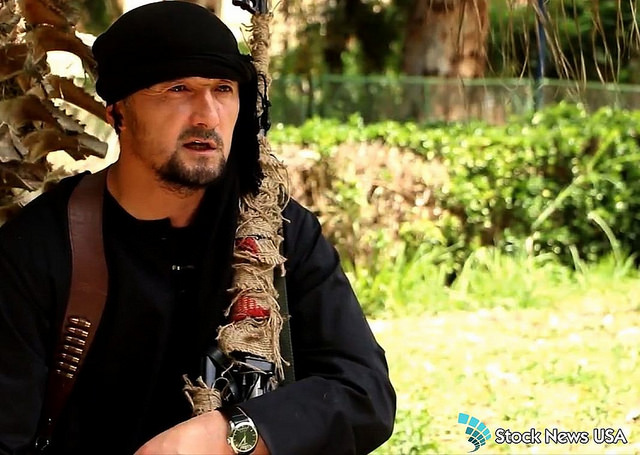 In April of 2015 Tajik police commander Gulmurod Khalimov disappeared for over a month after telling his family he was leaving for a short business. His whereabouts were clarified on May 27th when Khalimov appeared in a YouTube video proclaiming his allegiance to the Islamic State in protest of harsh government restrictions on religious expression in Tajikistan. In addition to declaring his allegiance to IS, Khalimov described his involvement in U.S. taxpayer funded counterterrorism programs with the private security firm Blackwater. The State Department has confirmed his participation in five training programs in the United States between 2003-2014. Since his defection to IS in 2015 Khalimov has experienced significant upward mobility. Although his precise rank is unclear, it appears he is now the second senior commander of the Islamic State. Considering his past participation in U.S. security training programs is it in Washington’s best interest to dismiss his case as a rogue defection. Unfortunately, Khalimov’s allegiance to the Islamic State reveals how the U.S. pursues an ineffectual counterterrorism policy where security assistance given to Tajikistan vindicates government religious repression, thereby contributing to radicalization.

The following discussion warrants stylized facts about politics in Tajikistan. First, despite a brutal civil war between 1992-1997 and Tajikistan’s status as the poorest Central Asian state, the increasingly authoritarian regime of current president Emomali Rahmon has been remarkably stable. He recently became Tajikistan’s president for life after 95.4 percent of the population voted in favour of a questionable referendum extending his term indefinitely. Freedom House, an organization that assigns countries a “freedom score” out of 100 based political rights and civil liberties, ranks Tajikistan as “not free” with a score of 16.Human rights, and religious freedoms in particular, suffer in Tajikistan. Rahmon’s secular government routinely restricts religious activity of the majority Muslim population. As Khalimov addresses in his video, the regime has taken measures to restrict the sale of Islamic literature and prevent women from wearing hijab and men from wearing beards, both of which are considered “alien” to Tajik national culture. The Islamic Renaissance Party of Tajikistan (IRTP), which was previously the only legal Islamist political party in the former Soviet Union, was deemed an extremist organization and banned by the government in 2015. The legality of IRTP within Tajik politics was central to the peace deal that ended the civil war between the Soviet supported regime and an Islamist-led opposition, demonstrating the close link between political dissent and religion. The recent crackdown has included imprisonment and torture of activists, as well as persecution of IRTP political leaders.

Washington is well aware of Tajikistan’s relationship with religious freedom. However, the Central Asian state enjoys significant U.S. security aid, much of which supports the military and police apparatus that perpetuates repression. Security Assistance Monitor, an organization that tracks U.S. security assistance spending abroad, reports that Tajikistan has received $43.9 million in arm sale authorizations since 2003 and $274 million in military and police aid since 2000. This is very little compared to the amount that other countries such as Egypt and Pakistan receive, but it is significant that as of 2014 U.S. taxpayer dollars make up 21 percent of Tajikistan’s overall defense budget. The case of Khalimov’s training with Blackwater, is a very narrow example of the U.S.’s far-reaching role in Tajikistan’s security.

The United State has historically justified security cooperation with Central Asia citing counterterrorism and the need for access to Afghanistan. An article by Brookings Institution Senior Fellow Fiona Hill explains that the U.S. presence in the region following 9/11, including physical bases in Uzbekistan and Kyrgyzstan, helped calm border tensions between Tajikistan and Afghanistan and curb the influence of the Taliban. At a recent meeting between Secretary of State John Kerry and the foreign ministers of five Central Asian states, including Tajikistan, all parties reconfirmed their mutual commitment to fighting terrorism and deepening security cooperation, suggesting this relationship is unlikely to change.

However, the U.S.’s counterterrorism policy towards Tajikistan is not only ineffectual but also counterproductive. U.S.-Central Asian cooperation has empowered leaders to justify their repression in the name of fighting terror. Similar to other Central Asian states, The Tajiki regime fails to distinguish between political opposition and religious extremism, conveying the governments blanket approach to eliminating Muslim influence in society that is perceived as threat to secular government. The politically motivated persecution of anybody with ties to the banned IRTP highlights that the regime makes no real attempt to distinguish between politically moderate Muslims and those with radical affiliations. The failure to distinguish between opposition and extremism increases the likelihood that dissent will be voiced through alternative, more radical anti-government means since dissatisfied groups lack appropriate political outlets. The regimes’ religious repression only gives credibility to the claim of groups like IS that Muslims are not free to practice their faith.

Unsurprisingly then, Khalimov is only one of thousands of Central Asian nationals have joined militant groups abroad. An estimated 1,300 Tajik and 1,500 Uzbek nationals are fighting alongside ISIS-affiliated groups such as Jamaat Imam Bukhari and Tawhid wal-Jihad. The involvement of Central Asian nationals in terrorism was highlighted this past summer after officials in Turkey asserted that the airport suicide bombers were Uzbek, Kygryz and Tajik citizens.

Following the attacks, Tajik officials maintained that no Tajik nationals were involved and Uzbekistan made no immediate comment. This muted reaction to the possibility of radicalized Central Asian citizens committing terrorist acts reflects official government statements concerning ISIS and other militant groups. For example, a deal between Turkmenistan and Uzbekistan concerning antiterrorism emphasized “the joint protection of borders under external threat.” The narrative that terrorism is an external threat of which Central Asia is a victim allows governments to ignore domestic issues that fuel religious extremism.

Regardless of the official line leaders adopt, the problem of radicalization and terrorism in Central Asia is consistently linked in to government repression. Domestic issues, in large part lack of religious freedom, create the conditions that make jihad attractive. As U.S. security assistance makes up almost one fourth of Tajikistan’s military budget, Washington is implicated in the state’s security policy that exacerbates terrorism instead of properly addressing it.

It is unclear what a Trump administration portends for security assistance to Tajikistan. The president-elect seldom outlines his specific policy intentions. On the one hand, Trump has conveyed his intention to cut spending on bilateral and multilateral security commitments such as NATO, arguing the group is “obsolete” and a disproportionate financial burden for the United States compared to other member countries. As is often the case, behind Trump’s bellicose rhetoric there is a piece of truth. Some have advocated for more prudence and restraint in U.S. security spending abroad, in particular arguing that the United State’s military and police aid programs are often wasteful and ineffectual. The case of Tajikistan seems to support these criticisms.

On the other hand, Trump has promised to make counterterrorism a central tenet of his administration. Based on many statements Trump has made concerning Islam and Muslims in America, it’s easy to see how Trump would wholeheartedly support Rahmon’s position on religious extremism. What the two leaders appear to have in common is an absence of concern for the human rights implications of such policies. Even though the U.S. has given millions to Tajikistan in security aid, Gulmurod Khalimov felt that the Islamic State served his interests better than Rahmon’s regime. As a top police commander witness to human rights abuses, he was presumably in an informed position to judge. Both Trump and Rahmon would be wise to reappraise the relationship between restrictions on religious freedom and religious extremism to ensure the effectiveness of counterterrorism policies.