By Elizabeth Franceschini On Nov 7, 2020 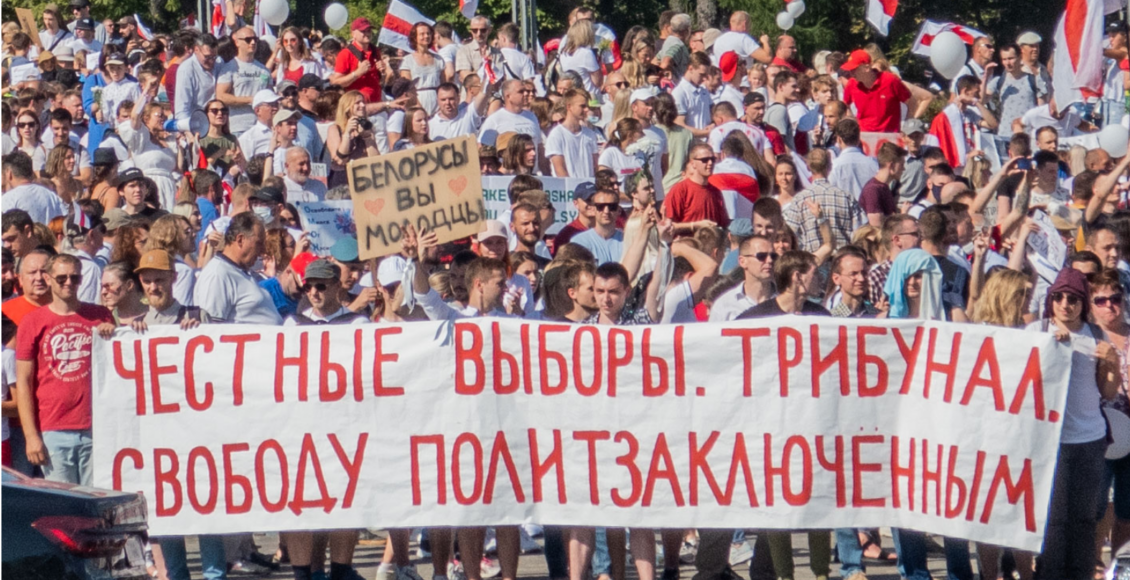 On August 9, Alexander Lukashenko was re-elected for his sixth term as the President of Belarus. According to government figures, Lukashenko gained over 80 per cent of the votes, a number which the Belarusian government has used to grant the incumbent legitimacy in ruling over Belarus. However, these figures are not a true representation of the democratic processes of the country, which are instead demonstrated by ongoing opposition protests. The results of the recent presidential election have sparked a wave of protests across the country, where most citizens have only ever lived under Lukashenko’s leadership.

When first elected in 1994, Lukashenko was largely credited by his people for providing them with stable jobs and government protection. Nearly two decades later, however, Lukashenko’s main objective has only been to gain power, leading to large waves of citizen discontent. A previous employee on Lukashenko’s campaign trail has gone on the record to say that, “[Lukashenko] was a good listener, but after he was elected, he started to seize power and stopped listening.”

Undoubtedly, the protest movement occurring in Belarus is a direct threat to Lukashenko’s regime. For nearly 26 years, Belarus’ leader has been commonly referred to in the West as “Europe’s Last Dictator.” Now, there is a changing tide in the country. As demonstrated by the voices of protestors, there is a deep demand for freedom of expression and free and fair elections. In a time where citizens are already grappling to find stability and safety in the face of COVID-19, there comes a desire for leadership that prioritizes the voices of its constituents over preserving political power.

In spite of rising COVID-19 cases in Belarus, Lukashenko has openly denied the existence of the virus, claiming that the panic is the result of a “psychosis” and that drinking vodka could help get rid of the virus. The denial of COVID-19 is common among several autocratic governments, and the Lukashenko government’s inaction follows a long string of unanswered demands and concerns from the people of Belarus. For example, in the lead-up to the August elections, several potential presidential candidates were barred from participating. The notable figures who were able to gain leadership — and are said to be the true representatives of the needs of the Belarusian people, like Sviatlana Tsikhanouskaya — have either been exiled or jailed. In fact, Tsikhanouskaya’s husband, Sergei Tikhanovsky, who led a Youtube channel criticizing the Lukashenko regime, was jailed back in May under the pretence that his actions were causing “mass disturbances.” Mr. Tikhanovsky wished to challenge Lukashenko in the August elections, and following his arrest, Tsikhanouskaya ran in his place. Her wide success is a testament to the desires of the Belarusian people to find someone representative of their needs.

2 months of political crisis, violence and lawlessness in Belarus. Enough is enough. We’re announcing the People’s Ultimatum on October 25th. We demand that: 1. Lukashenko must go. 2. Violence has to stop. 3. Political prisoners must be released.1/ pic.twitter.com/VQY5DnaF0I

In the West, governments have refused to acknowledge Lukashenko as a legitimate leader and have openly accepted the demands of the protestors. While large marches, some of which have amassed over 100,000 protesters in one day, are mostly organized by the people of Belarus, such events have not deterred Lukashenko from blaming NATO for the destabilization of his political power. Russian President Vladimir Putin, a political ally of Lukashenko, has acknowledged the “unprecedented external pressure” facing Lukashenko as a result of the protests, and has promised to lend the government over $1.5 billion to help resolve the country’s political crisis. The close bond between Lukashenko and Putin shows how the Belarusian government is not willing to step down and face the requests of the protestors. It further demonstrates how willing Putin is to keep Belarus in Russia’s orbit, not willing to sacrifice the country to the democratic will of its people.

Most recently, Tsikhanouskaya was put on Belarus’ and Russia’s “wanted list” in a joint effort to carry out a warrant against one of Lukashenko’s political opponents. It is believed by many Belarusians that Tsikhanouskaya is the true victor of the recent Belarusian elections, winning approximately 60 to 70 per cent of the vote, had the election not been rigged. In an interview with NPR, Tikhanovskaya stated that Lukashenko’s 80 per cent win was perceived as widely false and “caused real protest in people, because they knew who they voted for.” Currently exiled in Lithuania, Tikhanovskaya is calling on the international community to pressure Lukashenko’s regime and encourage a democratic transition of power for the people of Belarus.

Despite the efforts of the Russian Federation to prop up the Lukashenko regime, Tikhanovskaya is adamant in clarifying that the current revolution in Belarus is not anti-Russian, stating that, “The peoples of Russia and Belarus have always been good neighbours and close friends.” It is critical to note how the current uprisings are not occurring with the intention of aligning the country with Western or Euro-Atlantic policies. As voiced by Tikhanovskaya, “[The] revolution is not geopolitical.” This sentiment separates the nascent revolution in Belarus from other post-Soviet revolutions and movements in its surrounding regions, which have largely defined themselves as being either pro-European or anti-Russian.

The current wave of protests marks a pivotal moment in Belarus’ history. While there is much to be said on the democratic processes of the country, especially as they relate to democratic trends of several post-Soviet countries, the people of Belarus are in the midst of creating a revolutionary path to freedom for the country. This revolution refuses to be characterized by the aims of Western powers, or by its comparison with the achievements of other post-Soviet countries’ revolutions. For the first time in the country’s history, the Belarusian people have a real voice in deciding what the just and right path will be for their country.