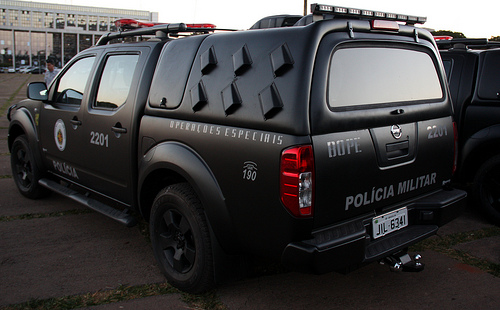 “Loyalty, fearlessness, integrity!” chant the men of Rio de Janeiro’s Elite Squad in their dub step-laden promotional YouTube video. The Special Operations Battalion (BOPE in Portuguese) has been at the frontline of Rio de Janeiro’s struggle to clean up the city before the upcoming World Cup. Images of their officers clad all in black, with their emblem featuring a skull and two crossed pistols, have become synonymous with the extreme levels of violence in the favelas, Brazil’s urban slums. Aimed at uprooting organized crime, BOPE’s operations have been marred by extrajudicial executions, torture, and impunity. A 2009 Human Rights Watch Report, with a picture of a BOPE patrol vehicle featured on its cover page, remarks that the military police in Rio and Sao Paulo have killed 11,000 since 2003.[1]

BOPE is just one unit in the larger system of military police throughout Brazil that are responsible for maintaining public security and order, alongside the regular civil police.  Yet, The United Nations Human Rights Commission recommended that Brazil abolish its military police in 2012, primarily due to extrajudicial killings.[2]  Despite this seemingly negative reputation, BOPE occupies a unique position on the public consciousness. Their website, with its flashy presentation and corresponding Facebook and Twitter accounts, point to an organization that is nothing less than a cultural phenomenon. Two blockbuster films “Elite Squad”, and its sequel, fictionalize their exploits and feature graphic scenes of torture and bloody gunfights. The sequel is the highest grossing film in Brazilian history. The public has both interpreted the films as a glorification of BOPE’s actions and a criticism of them. Support for BOPE is underpinned by a belief amongst some sectors of the population that “human rights and public security are conflicting priorities.”[3] This mindset allows for a certain degree of police abuse to take place in the name of “public security”.

Still, state violence and the repression of minority groups is nothing new in Brazil. Since the arrival of the Portuguese royal family in Rio de Janeiro, the police have been an instrument to control and repress the underclasses. During colonial rule, police were largely used to control Brazil’s massive slave population.[4]  The “criminalization of poverty”, now felt in the battle for control in the favelas, has an extensive historical precedent. In this way, state violence is a “historical fixture”[5] that has remained constant regardless of the political system at hand.

Therefore, BOPE’s actions are hardly a new phenomenon. The unit itself has authoritarian roots. The military regime created BOPE in 1978 and designed the unit to handle hostage situations. However, as drug trafficking expanded in the favelas, BOPE’s role expanded to a specialization in urban warfare. [6] Today, BOPE effectively operates as a first strike force in Brazil’s Pacification Program that is meant to prepare the city for the World Cup.

The pacification program carries with it a “logic of war”.[7] BOPE conducts raids on the favelas in order to secure the area and search for drugs and firearms. Once an area is secured, community police called the Pacifying Police Unit (UPP), move in.[8] This strategy of “capture and hold” is reminiscent of counterinsurgency strategies that emphasize good relationships with local populations. The UPP was meant to decrease levels of violence and death related to police operations while improving relations with locals, by integrating law enforcement into favela communities. However, even the UPP has been implicated in acts of torture and extra-judicial killings.[9]

Breaches in the rule of law by police forces continue in the favelas because checks and balances on the system are weak. Even those legal mechanisms in place to monitor the police often conceal, rather than combat, military police abuses. Police records often label police killings under “resisting arrest” or attribute them to deaths during police “rescues”, where victims die on their way to the hospital.[10] Brazilian law mandates that officers provide assistance to victims of police shooting.

Yet, the Report’s findings suggest that most of these killings are in fact executions, justified through official regulations. Victims are found with wounds inconsistent with the official cause of death, such as gunshot wounds to the head.[11] The problem of police “rescue” for example, has become so pronounced that the police are no longer authorized to bring victims to the hospital. According to some, disallowing police from bringing victims to the hospital has actually decreased the amount of killings in Sao Paulo.[12]  Such a perversion of official regulation demonstrates a deep irony in the rule of law in Brazil. Mechanisms designed to prevent abuses are clearly insufficient.

Gaps in accountability issues have in large part been due to institutional shortcomings that allow impunity to continue on unchecked. Internal investigation agencies lack the independence and impartiality to properly investigate instances of abuse. Military and civil police chiefs appoint heads of internal affairs, leaving them vulnerable to political pressure. At the same time, the officers charged with conducting these investigations face negative incentives.  Internal affairs officers are ostracized and denied promotions. Additionally they often “end up transferring to other units and go on to work with colleagues they had previously investigated.”[13] Accountability mechanisms within the military police are self-reflexive, as the “police are left to police themselves.”[14]

The causes of Police abuses in Brazil run deep. Breaches in the rule of law are multi-dimensional, resulting from historical, cultural, and institutional factors. Fully addressing these breaches will require systemic change, and will not be met with a “smoking gun”. With the World Cup around the corner, public security will remain the priority, making systemic change unlikely in the near future.