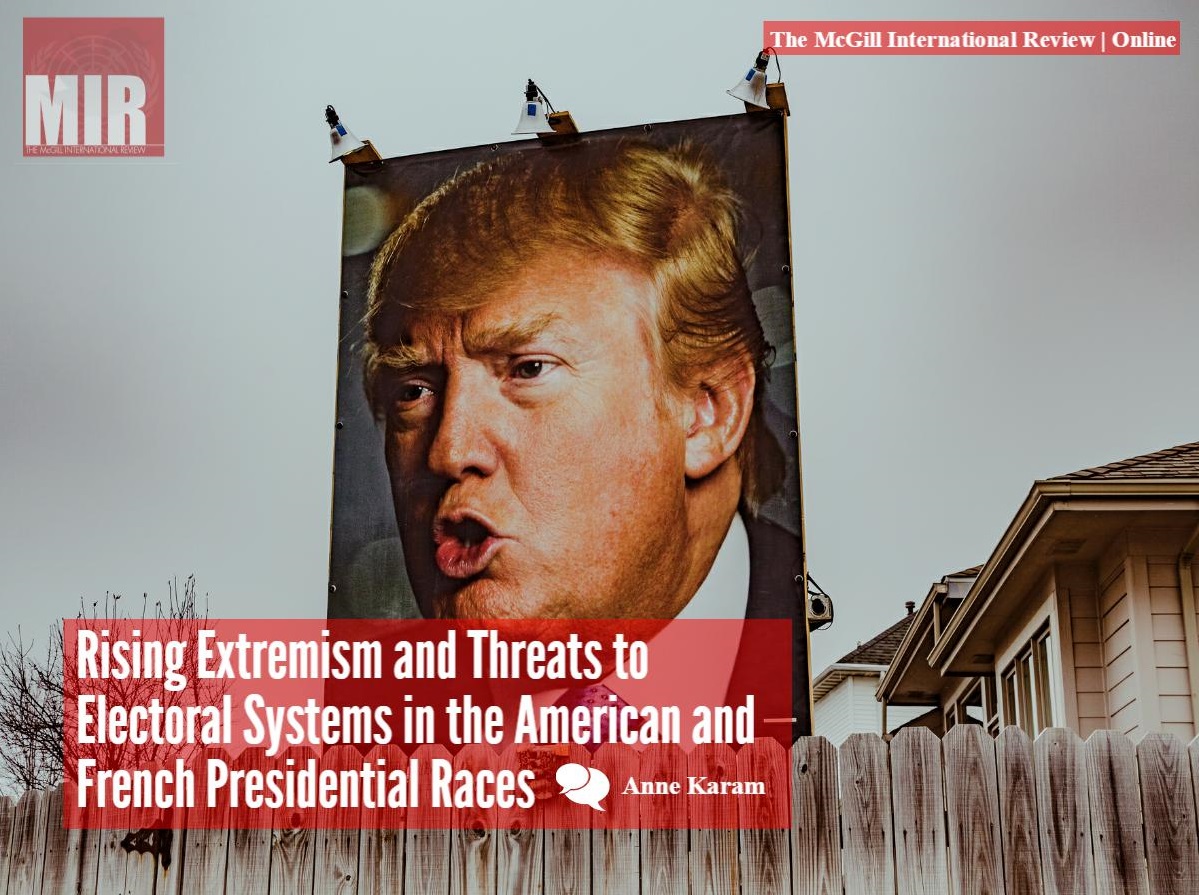 In the United States and France, rising populism and extreme right tendencies are challenging two traditionally solid, yet different, electoral processes: the American two-party system and the French universal direct suffrage vote. In light of these differences, the French system seems to be better equipped in preventing demagogues from reaching the highest office of the land. Consequently, the future of Western democracy could be influenced by the results of these presidential elections.

In the weeks and months to come, the head of states will change in two very influential countries. Both the United States of America and France, members of the G7 and permanent members of UN Security Council, have highly publicized and consequential elections this year. The timing of these elections and the impact their results may have on several issues facing the world today, such as the economy, immigration, and the fight against terrorism, present an opportunity to take a closer look at the American and the French political processes, which are both designed to ensure fair representation and a functioning democracy, but both of which are challenged by the rise of populism and the extreme right.

The nomination as the Republican Party’s (GOP) candidate for the presidency of populist Donald Trump, a businessman with no political experience or clear and consistent party affiliation, starkly outlined a vulnerability in the American two-party electoral system. Trump worked his way to the nomination by posing as an anti-establishment conservative candidate. He beat other traditional Republicans by riding a wave of discontent and anxiety in some segments of the electorate, particularly white blue-collar workers who feel left out of the political process and threatened by immigration and worry that their place in their country is threatened by immigrants and minorities.

Trump gave voice to the extremists within the GOP and hijacked a party he constantly rebukes. His “policy plans” rarely reflect the traditional Republican platform; rather, they introduce a new brand of extremism. For example, while Republicans have traditionally called for tougher measures against illegal immigration and for the rejection of amnesty for those who enter the country illegally, Trump has built his campaign on the promise of implementing more drastic measures —which some pundits have called xenophobic and anti-American— such as building a wall along the Mexican border, banning or “extreme vetting” Muslim visitors, and refusing to admit Syrian refugees. During the third and final presidential debate, on October 19th, Trump refused to commit to accepting the results of the election, rejecting democracy at its most fundamental point: the voters choose who wins. “I will look at it at the time,” he said, adding “I will keep you in suspense, OK?” According to the Washington Post editorialist Dana Milbank, Trump “is running against democracy itself” and democracy should fight back by dealing him a humiliating defeat.

The latest polls indicate that Trump’s chances of winning the presidency are very low, with the New York Times giving him an 7% chance as of October 22nd. For some analysts, however, the fact that he was nominated in the first place shows that the Republican-Democrat binary can be risky for democracy. As Trump’s example can illustrate, in a two-party system, it only takes one side becoming dysfunctional for the whole system to be shaken and risk collapse. The two-party system also means that voters have to choose between two major candidates and that the one who ends up being elected president may not be democratically representative, neither of the American people, nor of the party of which he or she was the candidate. This explains the limited —but notable— rise of Libertarian candidates for President and Vice President, Gary Johnson and Bill Weld, and Green Party nominee for President, Jill Stein. This rise is particularly notable among young voters who reject Trump yet remain unconvinced by the Democratic nominee, Hillary Clinton.

In comparison to the American system, France’s electoral system seems better equipped to handle challenges from extreme right groups, such as the increasingly popular Front National (FN) party led by Marine Le Pen. France’s multiparty electoral process is based on direct universal suffrage in two rounds: in the first round, voters chose between eligible candidates of various parties. If no candidate obtains an absolute majority (more than 50%), the two top candidates with the most votes face off in the second round, in which the candidate with the most votes is elected president.

This system was put to the test in 2002, when Jean-Marie Le Pen, father of Marine Le Pen and leader of the FN at the time, reached the second round of the presidential elections against Gaullist right candidate, Jacques Chirac. Le Pen, a racist Holocaust-denier, then suffered a devastating loss, receiving less than 18% of votes compared to Chirac’s 82% —an unprecedented margin of victory in Fifth Republic history. Regardless of the reasons behind Le Pen’s “achievement” in 2002, it was the electoral system that allowed French voters to block Le Pen from getting even close to the highest office in the country and to irrefutably reject his xenophobic and anti-Semitic ideas.

Following this harsh loss, the FN declined in the polls until Marine Le Pen stepped in as president of the FN in 2011. She began to distance herself from her father’s rhetoric and to reposition the FN as a viable and respectable alternative to what she describes as bankrupt establishment parties. She even went as far as to expel her father from the party after he repeated his controversial statements about the Holocaust. The deadly terrorist attacks in France of 2015 and 2016 increased the popularity of the party’s stance on immigration and issues of national identity. This was accompanied by the simultaneous rise of extremism across Europe, in countries such as Austria, Poland and Hungary, as the migrant crisis resulting mainly from the Syrian conflict reached a peak in 2015. Today, the FN is credited with 10-19.9% of the votes and its leader may repeat her father’s feat by reaching the second round of the presidential elections on May 7th, 2017. Marine Le Pen’s success with her presidency of the FN is owed to the way she mainstreamed her party and pulled further away from her father’s legacy, therefore making the FN seem like a viable and possible option for French voters, all while maintaining her extreme right positions. For example, Marine Le Pen’s main messages for the coming presidential elections echo those of Donald Trump. She is calling for a presidency outside the political class —or establishment (“la classe politique”)— and vowing, if elected, to rebuild a patriotic France (“La France des patriotes”) as a great nation able to protect its people.

While few expect Le Pen to become France’s next president, many predict a relatively strong showing for her in the first round of voting, which will be held on April 23rd, 2017. If she does manage to reach the second round, her achievement may embolden European extremism and increase the influence of nationalistic parties which are usually hostile to the European Union. In the USA, a Trump victory would have more devastating effects, not only because of America’s incomparable economic and military might in the world, but also because of its role as a beacon of freedom and democracy for the international community. On the other hand, one can only hope that a Trump loss would send a loud and clear message that racism, bigotry, and other extremist ideas have no place in liberal democracies.

Overall, the elections in France and the USA have extremely high stakes. For us observers and viewers alike, they present the opportunity to consider how resiliently these two political systems and electoral processes work against extremism and how well equipped they are to protect democracy.