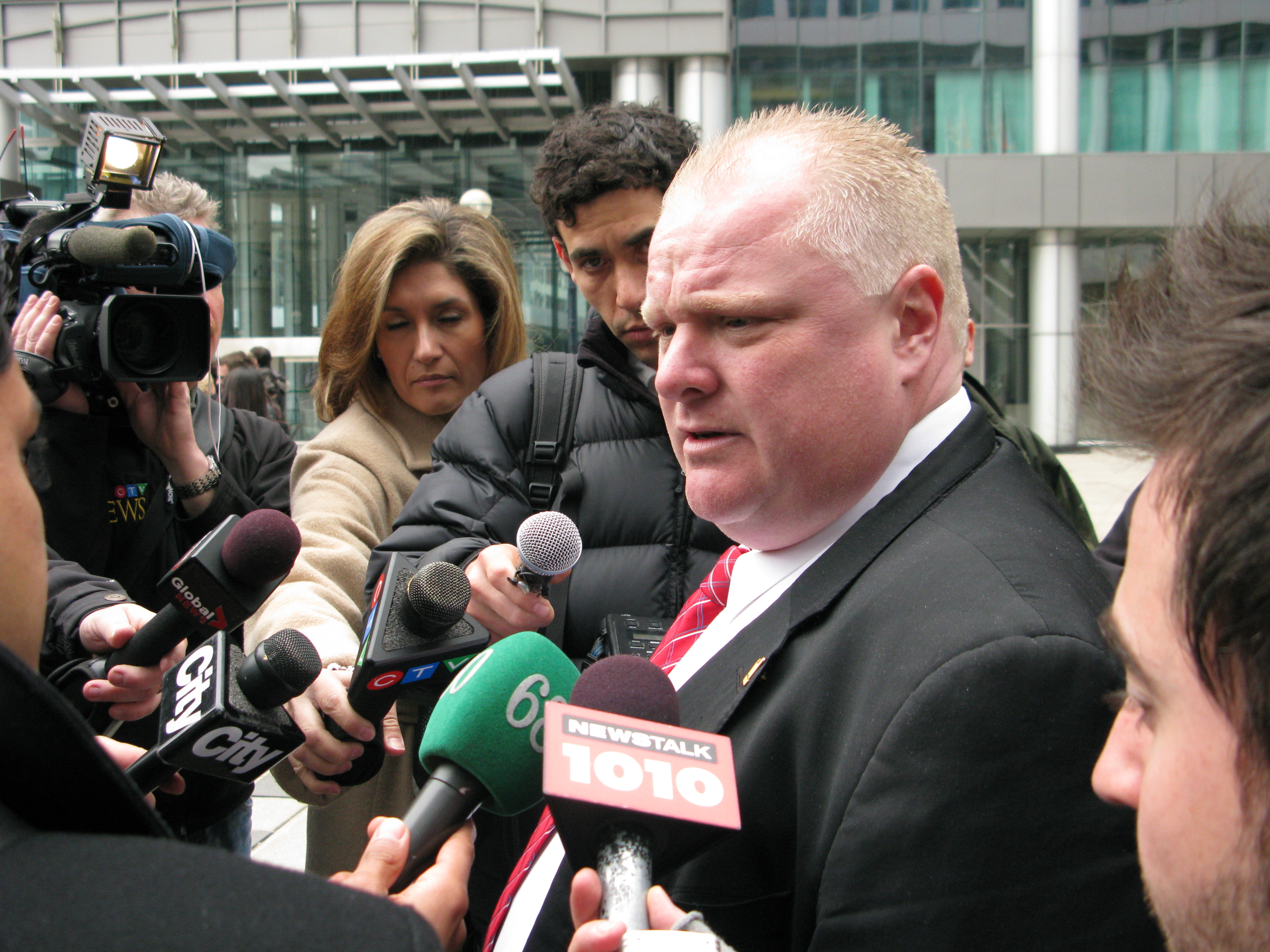 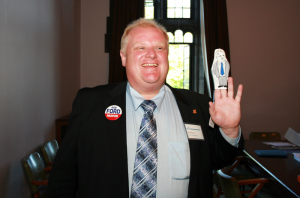 When Rob Ford was elected mayor of Canada’s most populous city in 2010, we expected him to perform the same lull routine that comes with being the mayor of Toronto. Dealing with TTC (the Toronto Transit Commission) and leading the Toronto City Council are the two preeminent tasks that the mayor presides over. These tasks seemed to be handled with ease by Ford’s Harvard-educated predecessor, David Miller, who kept a low profile in terms of his personal life and maintained a pristine public image. Ford’s downward spiral in politics has been very much the opposite and has caused an international stir.

Before Ford was elected mayor in late 2010, he served as a Toronto city councilor and was reelected twice. In his mayoral stint, he has eliminated the vehicle registration tax and reduced councilor expense budgets to $30,000. This however, is nowhere near his more than public claim that he “reduced the City of Toronto’s spending by $3 billion”, where, in fact, he has not even reduced it by $1 billion [1]. He became known for making widely controversial statements that included insensitive remarks about AIDS, the LGBTQ community, cyclists, and race. As a Torontonian who keeps up with local politics, it was not completely shocking to me when in early October of last year, the police revealed that they had in their possession a video of Rob Ford smoking crack cocaine. The suggestion of the existence of such a video had been a topic of discussion in local media for months, as far as February of last year.

It was hard not to at least chuckle at the absurdity of events that unfolded during this time; Ford had been publicly denouncing the claims for several months that such video existed. “I do not use crack cocaine, nor am I an addict of crack cocaine”, he said at a press conference in May of 2013 [2]. Ford then goes on to say that he “cannot comment on a video that he has never seen or does not exist” [3]. Within the next months, more evidence started to pile up that hinted at the existence of such a video, including confirmation by the Toronto police chief, Bill Blair. Finally, the peak of the entire fiasco occurred when Ford formally admitted to smoking crack cocaine stating, “I have smoked crack cocaine but … am I an addict? No. Have I tried it? Probably in one of my drunken stupors, probably approximately about a year ago.” [4] Ford also added, in terms of why it took so long to confirm the allegations that turned into an almost blatant truth, “I wasn’t lying. You didn’t ask the correct questions.” [5] He ended his statement confirming his plans to run for reelection and a half-hearted apology to the citizens of Toronto, ultimately, confirming his hypocrisy and complete lack of moral judgment. However, when news hit international headlines and popular culture, commentary shows like Late Night with Jimmy Kimmel and SNL, along with shows hosted by political satirists Jon Stewart and Stephen Colbert, Ford’s popularity only rose. He became a running gag amongst news circles and the general public sphere.

After the eventual dissolution of the entire scandal, Ford entered rehabilitation and began his campaign for reelection shortly after. In a classic case of the absurdity that is Rob Ford’s life, he became diagnosed with a rare and difficult form of cancer in mid-September. It was later announced that his brother and city counselor, Doug Ford, would replace him in the upcoming mayoral election on October 27th of this year. The seemingly odd turn of events allows for other mayoral candidates like Olivia Chow and John Tory to spread their campaign messages without interfering media coverage regarding Rob Ford’s unprofessionalism. Both candidates are more suitable for the mayoral position; Chow is a former NDP MP, most famously known as Jack Layton’s widow, while John Tory is the former leader of the PC. The candidates have great plans for the future and endorsements from other political figures. It is safe to say that a scandal from either of these two leading candidates is not likely.

Historically, Toronto has not been a city without scandals from our various mayors. David Miller may have been a pristine example but his predecessor, Mel Lastman, was not without his dirty laundry. During Lastman’s tenure as mayor, he announced in an impromptu press conference that he had maintained a 14-year extramarital affair and also denied responsibility for his two illegitimate children even after it was later proved he was their father [6]. Lastman was the mayor of Toronto from 1998 to 2003, and media has changed greatly since then. The Internet and other forms of media in a democratic society have inevitably changed how we use it. The coverage of Rob Ford’s scandal was daily, and I heard it on the radio everyday for half a year in the morning, came home to it on the news, and saw it debated and discussed on the Internet at night. The digital age has changed how we view things and how information travels. Rob Ford’s case has reinforced an invaluable lesson that has been historically relevant and will always be the case: handle your personal life as seriously as your work life when you are a public figure (particularly in a position of power). As much as Ford was seen as a running gag in most of the public eye, he was ridiculed and completely delegitimized his position of power in the process. As for the future, all we know is that the position of the mayor of Toronto will never be seen in the same light.

[4] Church, Elizabeth, and Joe Friesen. “Toronto Mayor Rob Ford apologizes, but will not step down, after admitting to smoking crack cocaine.” The Globe and Mail. N.p., n.d. Web. <http://www.theglobeandmail.com/news/toronto/rob-ford-councillors/article15263319/?click=tglobe>.

Michelle Guo is an U0 Arts student at McGill. She plans to study either Sociology or Political Science and work in Government or Law. She has worked as a volunteer and a Branch Co-chair at the Canadian Red Cross in addition to doing international volunteer work in Costa Rica. Michelle is passionate about research, social issues, politics (both Canadian and international), writing, humanitarianism, legal affairs, classic literature, social media, pop culture, and (of course), international current events.