Rojava: A Utopia Born in Blood 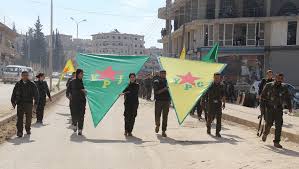 In northern Syria, an ideological war within a war is taking place. It brings two contradictory models into opposition. On the one side, Rojava, a democratic and pluralistic autonomous region, which aims at protecting “fundamental human rights and liberties and reaffirms the peoples’ right to self-determination“, as said in their founding document. On the other side, the Islamic State (ISIS), whose goal is to establish the largest Caliphate possible under the rule of Sharia law, according to the most literal interpretation of Islam. This conflict has already taken its toll, most notably during the Kobani massacre in June 2015, and is far from being over.

Both camps have strong ideological tenets and are willing to turn northern Syria into a laboratory to further spread their ideas. The difference is that ISIS wishes to spread them through the use of force, by conquering territory, whereas Rojava aims at spreading “democratic revolution” by being an inspiration while defending their land. In other words, to protect with the sword and conquer by the mind. The people of Rojava fight for a relatively small territory – compared to Turkey in the North, and ISIS’ controlled areas in the South – but they do not want to expand it. Indeed, they are strongly against the concept of nation-state, inherited from the Sykes-Picot agreement, and believe in autonomy rather than nationalistic affirmation. Therefore, their model for organizing society could be a real alternative in the Middle East both to ISIS’s dark promises and to the never-ending rule of autocrats over modern nation-states.

The rejection of this idea of nation-state explains why Turkey, which has a complicated history with the Kurds, seems to fear the political revolution taking place at its border. During the fight for Kobani, Ankara had first prevented Kurds from Turkey to join the fight against ISIS; an attitude that had been heavily criticized from inside and outside the country. The reason Rojava scares Erdogan so much is that its leaders follow the ideas of the PKK leader, Abdullah Ocalan, and the Turkish prime minister is afraid they might reciprocally inspire the Kurds (15 to 25% of the Turkish population) in his country in their fight for autonomy: “Erdogan sees Rojava much the way the Israelis see Hezbollah-occupied southern Lebanon,” sums up Michael J. Totten.

To understand what threatens both ISIS and Turkey, we must look at the principles presiding over this “utopia”. The plans of ISIS are well known – a “commitment to returning civilization to a seventh-century legal environment, and ultimately to bringing about the apocalypse” – but the same cannot be said about Rojava. Perhaps, as said prior, because of its mainly defensive and non-expansionist attitude.

Rojava, meaning “Kurdistan of the West”, is a confederation made of three regions: Afrin, Jazira and Kobane. The cornerstone of their political project is embodied in the Charter of the Social Contract, a document issued on January 29, 2014 comprised of 96 articles. In the preamble, this Charter proclaims a “new social contract, based upon mutual and peaceful coexistence and understanding between all strands of society”. This coexistence is embodied in a pluralism taking various forms, as ethnic, religious, and gender diversities are promoted among the 4.6 millions inhabitants (as of November 2015) of the confederation. Kurds, Arabs, Assyrians, Chaldeans, Arameans, Turkmen, Armenians and Chechens live in this confederation recognizing three official languages: Arab, Kurdish and Aramaic. Moreover, Muslims (not only Sunnis), Christians, believers of ancient monotheistic religions, and even Jewish are able to freely-practice their faith.

To effectively ensure this coexistence, and to apply the principles of the Charter to society, Rojava relies on a political organization based on “democratic confederalism” theorized by the leftist and pro-independence Kurd Abdullah Ocalan. This doctrine “is based on grass-roots participation. Its decision-making processes lie with the communities. Higher levels only serve the coordination and implementation of the will of the communities that send their delegates to the general assemblies.” In concrete terms, what seems close to the ancient principle of direct democracy is established through consensus-based decisions taken in municipal assemblies. These assemblies are made of elected representatives of each communities, and deal with social and safety issues. At the “national” level are ministries, centralizing part of the decision-making in regards to the economy, agriculture, natural resources, and foreign affairs.

Aside from allowing coexistence – already an achievement in the current middle eastern context – Rojava’s political organization also seeks to promote emancipation, through fighting, knowledge and equality of opportunity.

The most discussed aspect of this “revolution” is the role of women. While a few kilometers away, women are used as sexual slaves by the jihadists, in Rojava they have their own fighting units and a political representation ensured through quotas. For example, each of the three enclaves of Rojava are run by two elected leaders, one being a man, the other a woman. Each ministry must be led by three persons including a woman and a member of one of the three main communities – Kurds, Arabs, Christians. Yet women also have a strategic role outside the purely “political” sphere. The YPJ (Female Protection Units) are women-only forces, fighting alongside the YPG (People’s Protection Units). In November 2015 they made up approximately 30% of the soldiers in Rojava. Aside from being a clear political statement in favor of gender equality, the presence of women on the battlefield has a psychological impact on jihadists, who fear they will be deprived of their 72 virgins in paradise if they are killed by a woman.

The promised emancipation is not only gender-orientated, as a university was created to allow young people to gain knowledge in law, sociology, and history in two languages: Arabic and Kurdish.

Though such a political offer deserves support when compared to the reality of ISIS, Rojava also has some “dark corners”. What first struck me when reading about Rojava was the omnipresence of Ocalan; the Kurdish dissident. Soldiers take some time between battles to study his work, his portraits are everywhere in Rojava, and people refer to him constantly. This ultra-personification of the revolution, though not unusual (think of De Gaulle for the French in 1940), could lead to a drift from a seemingly open society to a one allowing only its way of thinking. The fact that a single party – the PYD who are affiliated with the Turkish PKK – largely dominates the political life strengthens this concern.

In the end, one question remains: how can the rise of such an innovative conception of politics, alongside the most inflexible one, be explained? In an article for the New York Times Magazine, Wes Enzinna offers a possible answer to the rise of both Rojava and ISIS: “Syrians have endured an endless cycle of extreme conditions over the past four years, and so, perhaps, it should be no surprise that only the most extreme ideologies, no matter how brutal or utopian, are thriving.” What, between these two conceptions of the world, will prevail? The one that advocates for violence and chaos, or the one that tries to fight for education, justice and freedom? History will tell.

All images are labeled for non commercial reuse