Russia and the Baltics: A Series on Russia’s Hard and Soft Pressures and Responses to it 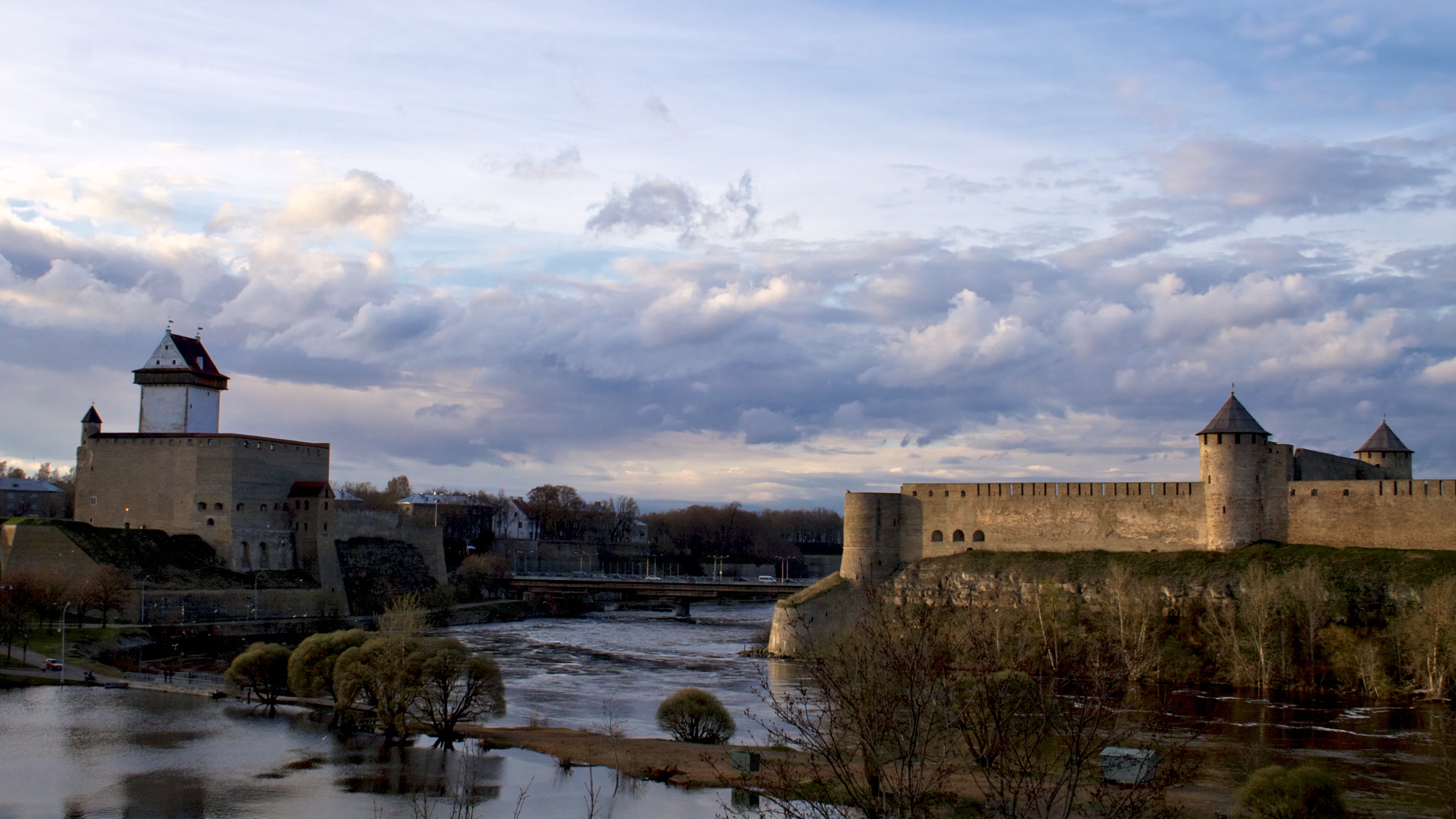 This will be the first article of a series analyzing Russia’s uses of hard and soft pressures to expand its sphere of interest in the Baltics, and how the world has been responding to these exhibits of Russian expansionist fantasies.

‘Narva is next on Putin’s Wishlist’ seems to be the consensus among the West’s defence establishment. The small town with 92%[i] of its population ethic Russian, has now been labelled the front-line of NATO efforts to counter Russia’s growing ambitions. This became especially visible when the US Army’s 2nd Cavalry regiment troops paraded through the streets earlier this year with the Russian town of Ivangorod just across the river. The parade was received as anything but an aggressive move by NATO to ensure the compliance of the local population. Narvans could be seen lining up to take selfies with the soldiers.

The flexing of military muscle in the Baltics has not been limited to Narva, with Russia ramping up its Air and Sea patrols in the region. Russian aircraft have had a number of close encounters with NATO aircraft, in some cases violating Estonian Airspace. There is history of Russia testing Estonian air defences but the number and seriousness of these new provocations has created a new pattern; Estonia’s Defence Chief described it as “not just bad weather, it’s climate change”[ii]. NATO has responded with operation “Atlantic Resolve” by beefing up air patrols, stationing American troops, and creating a rapid reaction force for the Baltics. Perhaps the clearest indication of a classic ‘hard power’ and siege mentality in the Estonian response has been the construction of a security fence along the border.

Amid these overt demonstrations of military power has been a subtler series of provocations (including questioning the legality of Estonia’s independence from the USSR), responses, and rhetoric. Russia has employed what western military planners call ‘hybrid warfare’. This entails using multiple strategies that combine conventional and unconventional, regular and irregular approaches.

One of the key facets of ‘hybrid warfare’ is the use of the media to delegitimise targets. In Estonia’s case, the Russian minority receives almost all of its news from Russian TV channels, with Estonian channels only providing 15 minutes of Russian programming daily. Almost fully dependent on these Russian TV channels, they are bombarded by Pro-Putin propaganda. Research by the Open Estonia Foundation has shown that the effect of these broadcasts has been to cause Estonian Russian speakers to mistrust the narratives of both sides. As this effort to undermine the trust and legitimacy of the National government and NATO has been recognised, countermeasures have been introduced. Estonia’s public broadcaster has launched the country’s first Russian language news channel (ETV+). Germany has followed with plans to produce programs for the Baltics Russian speakers. Even far-flung Allies have taken note of Putin’s media strategy: “Russia has deployed an information army inside television, radio and newspapers throughout Europe,”[iii] Ed Royce, chairman of the House of Representatives foreign affairs committee stated. Radio Free Europe and even Sony pictures have had requests from the State Department to counter Russia’s “skewed version of reality”[iv].

Among the elements of Russia’s covert efforts to destabilise Estonia is the use of the existing political landscape to weaken the government’s resolve. The Centre Party in Estonia that relies on the Russian minority for 70%[v] of its support, has been in opposition for a number of years as the country’s second largest party. The party has links to Putin’s United Russia, much like a number of euro-sceptic political parties, including France’s Front National. Pro-Russian political parties in Estonia have harnessed frustrations since independence about lacking language rights, citizenship that is dependent upon speaking Estonian, and weaker economic opportunities for the Russian minority. While the prospect of a new political party exclusively for the Russian minority has been raised, those Estonian-Russians who have grown up since independence have been more integrated.

The coordinated series of cyber attacks that started in 2007 against Estonia caused unparalleled damage to the country’s internet infrastructure. Many security researchers believe that these attacks were orchestrated directly or indirectly by the Russian state. This seems to represent another arm in Russian hybrid war approach. It does not constitute a conventional act of war, can cause significant damage (the country’s e-government and banking systems were disabled), and weakens the image of the state while still giving the Russian government plausible deniability.

Estonia is a member of NATO and under protection of the alliance’s Article 5, which interprets an attack on one member as an attack on all. Russian planners have used a combination of military posturing and covert actions to undermine both the physical capacities of Estonia and the support of the state itself. This adaption to covert disruptive actions is a direct response to what is still perceived as military deterrence in the form of NATO. However, Estonia’s neighbour Finland is not a member of the alliance and is also feeling the direct pressures of Russia’s military. Its strategy of independent defence is now under scrutiny as the protection of NATO becomes more attractive. Finland also lacks the Russian minority and gaps in national support that Estonia has. The Baltics must now adapt to an old adversary that no longer fights old wars.

Spy Games (on your screen)

A symbol of the Cold war made its return this month when Estonia and Russia exchanged two convicted spies over a bridge on the Piusa River. The exchange, the lead up to it, and the number of film cameras bear more than just a passing resemblance to James Bond’s Die another Day, except instead of crossing the heavily militarised DMZ the two spies crossed at a sleepy border point. Estonian counterintelligence agent Mr Kohver was arrested by Russian authorities on what they claim was their side of the border; the Estonians have insisted that he was abducted by FSB agents on their side near the quiet village of Miikse in an operation with smoke grenades and communications jamming. The evidence does seem to suggest that Kohver was indeed seized on the Estonian side of the border; the raked sand in no man’s land showed multiple footprints and impact craters, indicating a crossing from the Russian side. Kohver resurfaced in Moscow on trial for espionage and other charges, he was later convicted. Mr Kohver’s counterpart in the exchange was Aleksei Dressen, a Russian-Estonian who had also been working in the same Estonian Security Service. He was arrested in 2012 at the Airport with a flash drive full of classified documents along with his wife who was boarding a flight to Moscow. The bridge exchange, which was heavily reminiscent of Cold-War era trades on the Glienicke Bridge between East and West Germany, was not the only part of the story that was heavily covered by the media. When Kohver was first brought to Moscow his American-made gun and Euros were shown as evidence that he was a NATO spy. Dressen’s wife who had been released earlier was shown prominently on Russia channels affirming her commitment to her husband and trust in the Russia to ‘save’ her husband. When Kohver was returned to Estonia, a massive public support campaign was already in full swing calling for his release, including yellow ribbons. Before returning to his family Kohver was brought in front of dozens of cameras to give thanks for public support, especially for his family. The public relations value of these narratives does not seem to have been limited domestic audiences, Kohver was arrested two days after Obama visited Estonia and Kohver’s release was also timed days before Putin’s visit to the US. For a covert profession, espionage seems to involve a surprising amount of screen time.